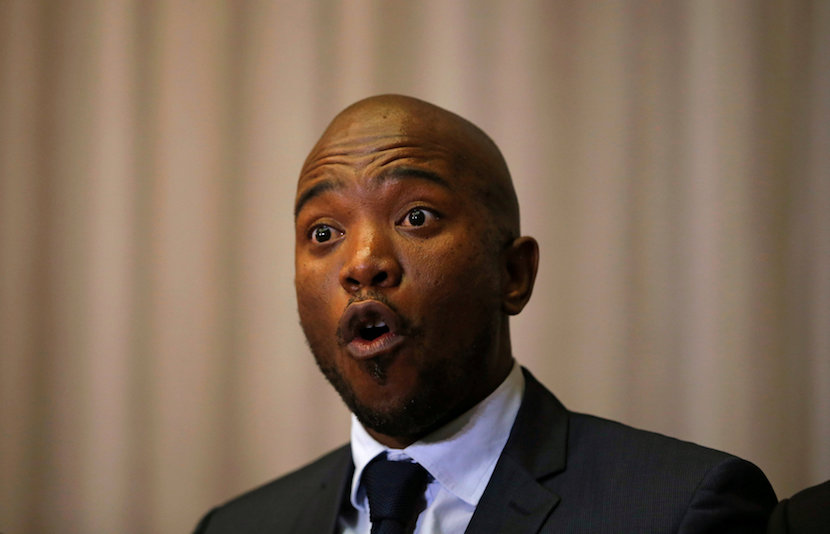 JOHANNESBURG — As the #GuptaLeaks revelations gather speed, the depths of corruption sink to the pit of one’s stomach. And one that has taxpayer’s furious is the millions of Rands channelled to pay for the lavish Gupta wedding at Sun City. Because behind this extravagant party lies a dairy farm in the tiny town of Vrede in the Free State, none other than current Mineral and Resources minister Mosebenzi Zwane’s home town. On paper it’s a developmental project that makes sense, but when you look at the finer details, not much goes in to  development, only the back pockets of those on the take. They say corruption hurts the poorest the hardest, and this is a perfect case in point. Democratic Alliance leader Mmusi Maimane went to visit to the farm and here’s his personal account. – Stuart Lowman

Last week I visited the Estina dairy farm in the tiny town of Vrede in the Free State. This picturesque rural setting has in recent weeks been exposed as the scene of a crime that has enraged the nation and shocked us all awake to the reality of corruption. It has also introduced us to the people, mostly poor and black, who are the real victims of this corruption. For years we have said that Jacob Zuma is corrupt and that it is the poor who suffer most when public resources are stolen for elite personal benefit. But now we could put names and faces to those previously anonymous victims.

The Estina farm has taken centre stage in an international money laundering scandal that saw R180 million in public money being funnelled through a complex web of local and international companies, all controlled in one way or another by the Gupta family. In the end, some of this money eventually made its way back to South Africa to pay for the costs of the extravagant Sun City wedding that the Gupta family hosted in 2013. This was the same wedding of Waterkloof Airforce Base infamy, when the Guptas showed enough clout in government to land their private charter plane at a state airforce base.

When you examine the detail of the project, you appreciate the full scale of the crime. The Vrede dairy project was a community project contracted between the Free State Provincial Government and the Estina dairy farm. The ostensible purpose of the project was to build a successful large scale dairy farm that would be owned by 80 beneficiaries from the local community, who would share in profits and have real say in management of the farm. This would make real business owners of poor, black South Africans and would boost agriculture output in the area. A win win!

On paper, this is a laudable model of economic empowerment, which is a necessary and urgent imperative for our country. The forced dispossession of black South Africans under apartheid caused a profound sense of loss, and severed all economic opportunity. The ramifications of this trauma continue to reverberate in society today.

#LegacyDialogue Pityana "if you have a corrupt President it sets the tone for society. Zuma is corrupt and he endorses corruption" SM

As is often the case, this redress imperative was usurped by corruption and looting by the ANC government. The details show that from the start, it was nothing but a corruption scheme hidden shamefully behind the fig lead of empowerment. Estina was given a free 99-year lease to a 4 400 hectare farm, as well as a guaranteed R 114 million per year for the construction and running of the farm. In truth, this cash was siphoned out of the country as quickly as the South African public payed it over.

The idea for this project came from Mosebenzi Zwane – whose hometown is Vrede – and who was the then MEC of Agriculture in the Free State. Zwane and officials from the Free State Department of Agriculture enjoyed a Gupta funded trip to India in October 2012, just months before the project was launched. This trip included multiple stays at Oberoi Hotels in India and a dinner at the Guptas’ house. Zwane is now the Minister for Mineral Resources, and his favours to the Gupta have only grown in scale and brazenness.

The awarding of the contract to Estina failed to follow many required legal steps. The Free State Government didn’t follow supply chain procedure when they agreed to fund the project, there was no due diligence done on Estina or its partnership with Indian Dairy company Paras, and money was deposited directly into Estina’s bank accounts with no verification process for where the money was being sent. In total, Estina was given R183 950 000 without having to invest a cent of their own money.

I am proud of how the DA has worked to expose the truth of Estina and fight on behalf of the rightful beneficiaries.

My colleagues Patricia Kopane, our leader in the Free State, along with Dr. Roy Jankielsohn MPL, have been persistently following the money trail in this case and exposing every new bit of information they have found. The DA called for an investigation into the project by the Public Protector, and the report on that investigation is due to be released imminently – within weeks, we are told.

Mining Minister Mosebenzi Zwane: I was never aware that the #Guptas were involved in the Vrede dairy farm. Its officials that implement.

Finally, I am determined that the beneficiaries should be given a full hearing in Parliament. We will arrange for the beneficiaries to travel to Parliament in Cape Town where they can tell their story, and so that ANC MPs can see for themselves the very human face of the victims of the corruption. Then, we hope, they will be less inclined to continue protecting and defending those within their party that continue to perpetrate that corruption, particularly President Zuma.