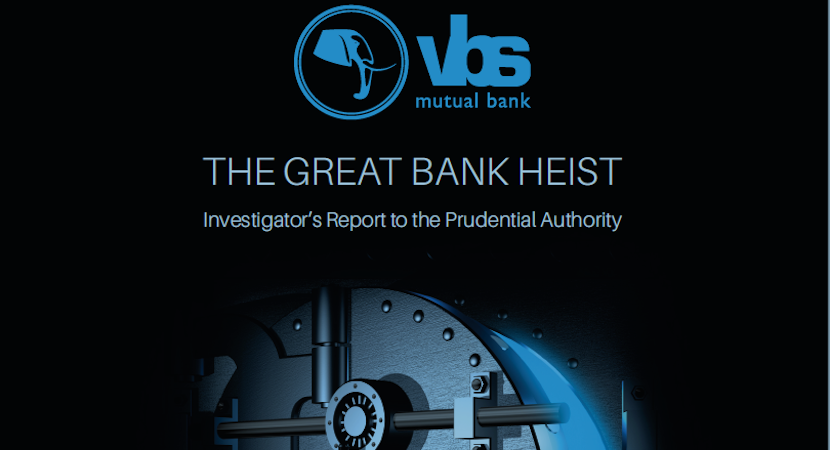 CAPE TOWN — For those of us following the VBS heist, this is an essential road map to help navigate what is happening in the aftermath of the revelations of massive fraud at a bank that flew and traded on, the black-pride flag. Not only did VBS attract people whose apartheid life experiences had led to mistrust in the white-owned financial establishment – it illegally sucked in municipal billions which it’s executives duly squirrelled away in their own and others bank accounts, leading to potentially greater hardship among more previously-disadvantaged people. Jannie Rossouw, deputy general manager at the Reserve Bank during current Finance Minister Tito Mboweni’s tenure, straightforwardly explains the transition from curatorship to liquidation – and how this will potentially affect depositors who individually lost hundreds of thousands of rands, much of it destined to secure futures for their children. It would seem from recent reports they’re currently getting about a third back, although the National Treasury guarantee implies, they may eventually get it all. At a cost of nearly R2 billion to the fiscus. How much longer can the State coffers handle Zuptoid-type bail-outs? One has to ask. Rossouw also highlights regulatory weaknesses in the two-tier banking system that helped the heist happen. – Chris Bateman

The South African Reserve Bank placed VBS, a small mutual bank, under curatorship in March this year against a backdrop of a serious liquidity crisis. The initial findings of the curator revealed significant financial losses, which prompted a decision to institute a forensic investigation. This was completed by early October and handed over to the banking regulator, the Prudential Authority. The report revealed widespread looting and subsequent cover-ups. The report was handed over to the country’s law enforcement authorities for further investigation and possible prosecutions. In the words of Advocate Terry Motau who headed up the investigation:

I have, for the past five months, investigated the sorry affairs of the VBS Mutual Bank. My report will reveal that the perpetrators of the heist at VBS made away with almost R2 billion.

Last week the banking regulator asked a South African court to terminate the curatorship and for permission to wind up the affairs of the bank. The regulator argued that liquidation was necessary because VBS was hopelessly insolvent after being subject to massive fraud. This meant that there was no prospect of saving the bank. The South African Reserve Bank responded to questions on the issue from Jannie Rossouw, who is Head of School of Economic & Business Sciences, at the University of the Witwatersrand.

What drove the regulator’s decisions?

In the first instance the decision to place the bank under curatorship was taken because the bank regulator realised that swift action was needed given the liquidity crisis that had come to light. This was necessary both to protect depositors as well as to make sure that no further damage could be done to the bank. The welfare of the depositors and the speed of execution was important.

The decision to go to court and ask for VBS to be liquidated six months later followed evidence that came to light as a result of the forensic investigation. The report showed that the bank had been subject to massive fraud. It was incumbent on the regulator to take action in the light of this evidence. As argued in the application, the regulator believes that the damage done to the bank is irreparable. And that it can’t be saved.

Why the decision to go from curatorship to liquidation?

When a bank is put under curatorship, the curatorship provides tools and instruments to manage the bank’s liquidity and its operations to save the bank, to put it back on a sound footing and to protect depositor funds. The idea is that the bank can be nursed back to health.

So the aim of curatorship is ultimately to turn the bank around. An example of this being executed successfully in South Africa was African Bank which was put under curatorship. It continues to operate today.

The decision to apply for liquidation was made on the basis that the Prudential Authority believes the final winding-up of VBS is in the best interests of all parties. It paves the way for two things to happen. Firstly, it will allow a liquidator to use the insolvency law and the Companies Act to effect recoveries – in other words to protect people who had deposited money with the bank. And, secondly, it will mean that the recommendations of the investigator into the affairs of VBS can be followed.

What does liquidation actually mean? What happens now?

Liquidation provides for the winding down of a bank under the terms set out in the Companies Act. The bank will still be managed to maximise depositor value, to collect on loans and to recover as much money as possible. It does, however, reduce the discretion on the creditor hierarchy. In other words a curator has more discretion about who gets paid out what amount. Under liquidation, that discretion is removed.

Nevertheless, the National Treasury has issued a guarantee that will ensure that 97% of retail depositors will be covered. That guarantee will remain should the court agree to the bank’s liquidation.

What are the key lessons learnt from VBS?

There are a number.

The first is that audit reports need to be treated with a degree of circumspection. In some cases they will require independent verification.

Mutual Banks are very different to commercial banks. The three main differences are that they tend to be smaller, that some types of deposits in mutual banks qualify as an ownership stake in the mutual bank and lastly that they’re not regulated to the same standard as commercial banks. Because they don’t carry as many risks, the regulatory framework governing them is substantially lighter.

But the events of VBS have shown that supervising small banks requires more resources. This is true even though the failure of a smaller bank won’t necessarily lead to systemic risk – it won’t pose a threat to the entire banking and financial services sector. But the risks still need to be managed better.