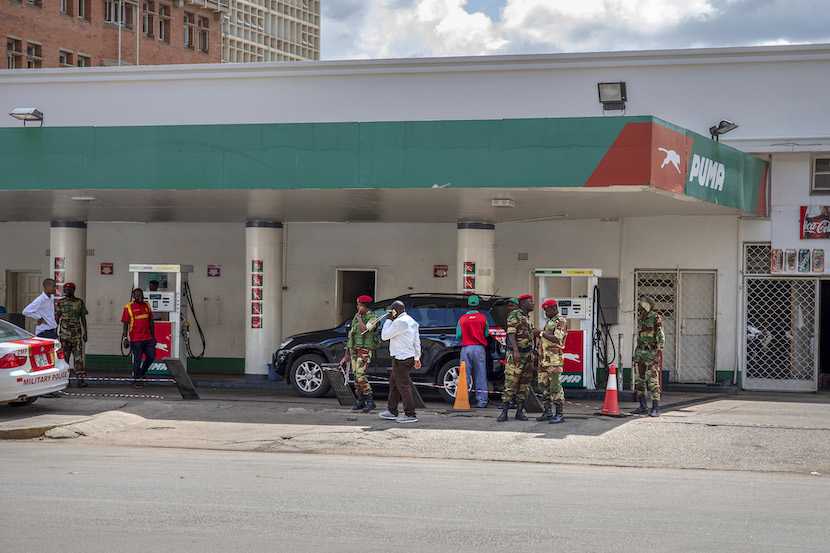 Spring may be in the air, but there is very little to celebrate in the change of season as the political climate in Zimbabwe remains oppressive and ordinary citizens continue to struggle to make ends meet. With social injustices occurring on a daily basis, violence and police brutality make things worse for the people of Zimbabwe eking out an existence in a weakened economy. President Emmerson Mnangagwa’s election in 2017 has done very little for the country that has continued its downward trajectory as human rights abuses mount. Cathy Buckle reports from the neighbour and shares her tales in the context of a new season, which hasn’t brought much change with it – Derek Alberts

How to survive a country in crisis

September is a raw, beautiful month in Zimbabwe: yellow, gold, orange and brown. Many of the trees are still leafless or just starting to get their spring colours and whirlwinds swirl for miles across parched, dusty countryside and over wide, dry, sandy river beds.

September is survival month when everything is gasping, waiting for the rain, desperately trying to stay alive. A tiny fledgeling Plover runs for cover across a dusty rise which is normally two metres underwater. Making it to a rocky outcrop the little bird pants as it recovers in the shade: a Kittlitz plover, long legs supporting a small fluffy body, its survival in such harsh surroundings a tenuous thread.

Later a Red-necked Falcon stands in the same rocky outcrop and you can’t help but wonder if the Kittlitz plover managed to survive. Much later when the sun and dust have gone and the sky is ablaze with stars, a genet appears, its golden fur covered with black spots and long-tail ringed with black circles.

Silently, effortlessly, the genet leaps from rock to rock checking every crack and crevice for a morsel, a scorpion or beetle, rodent or bird. Again you wonder about the little Kittlitz, is it really possible it survived that day?

These images of Zimbabwe in September are the little things that help divert our attention from the trauma of every day in a country in a desperate state. Then there are the big things which smack you in the face as soon as you go back into everyday life.

The shocking sight of mile after mile of illegal mines dug a few metres off the main highway; red, stony mounds of soil piled up, rough-hewn tree timbers supporting treacherous, unstable holes and caverns, waiting for victims in the hunt for gold.

The ‘miners’ are often young men, lean, hunched, filthy, emerging from the depths and trudging along the road carrying picks and shovels; their despondency and exhaustion palpable, how can they survive this Zimbabwe?

As I write it has been over thirteen days since five men were trapped underground at Task mine in Chegutu where a shaft collapsed on them; among them are two brothers, one just 17 years old, trying to find gold to sell and raise money for his school fees. Oh Zimbabwe, there are no words for the burdens and pains carried by our children.

Dragging your eyes away from the roadside mines because it’s too painful to see what you are seeing and imagine what’s going on, two huge low-loaders approach on the highway each carrying an army tank covered in brown square netting. Next comes a truck full of soldiers, police cars with blue lights flashing and another truck of soldiers. You dare not even think about where they are headed or what is going on in our country.

Again the news has been filled with unanswered questions and absurdity this past fortnight. The issue of the hire car from rental company Impala which was seen on CCTV being used in the abduction of a 22-year-old journalism student who was beaten and tortured for three days six weeks ago is still unresolved.

Tawanda Muchehiwa the young man who was abducted said: “Just under a month ago, I was a fully fit 22-year-old pursuing my dreams … I suffered horrific abuse at the hands of the five agents over the next three days, … I often wake up in the middle of the night sweating profusely with a pulsating headache. … I can feel intense pain on the right side of my jaw.

I never get back to sleep … I was threatened with death if I recounted that experience to anyone, but evil thrives on fear and my silence at this moment in the troubled life of our nation would be an act of complicity.”

A High Court Order to hand over records of who hired the vehicle and to provide the route tracker of those three days when Tawanda Muchehiwa was missing was defied by Impala who said they’d surrendered all documents to the police but six weeks later no one has been held to account.

When university students protested outside Impala they were arrested for an “illegal demonstration” and when the ZINASU leader was released on bail he returned and tried to hold a press conference near Impala he was grabbed by armed men in plainclothes who arrived in three vehicles and beat him up and attacked journalists covering the event.

When you sit outside on these balmy September evenings and think about life in Zimbabwe, the scales of justice and injustice, beauty and horror, constantly swing up and down. A satellite tracks across the night sky, past the Milky Way and the Southern Cross and a shooting star’s burning trail blazes for a second. Loving Zimbabwe is easy, surviving Zimbabwe is hard.

I am delighted to announce that my new book Surviving Zimbabwe has just been released and is now available. Surviving Zimbabwe tells the story not of why we stay in Zimbabwe, but how we survived and continue to survive a country in crisis.

Life does not consist entirely of negative, critical, attitudes and dwelling only on the things wrong with Zim.

Having recently had close dealings with Min. of Health for quarantine accommodation during the past few months, I am filled with admiration for their employees and the entire medical profession here, and how they have handled the epidemic.

My daughter is a teacher, and I also admire the Min. of Education and the private sector, for how they have done their utmost to ensure some kind of education during the past 6 months. And now they face the challenge of restoring students to the correct standard of learning, particularly those schools in the rural areas.

As the saying goes, “Be an Encourager. The world has plenty of critics already”.