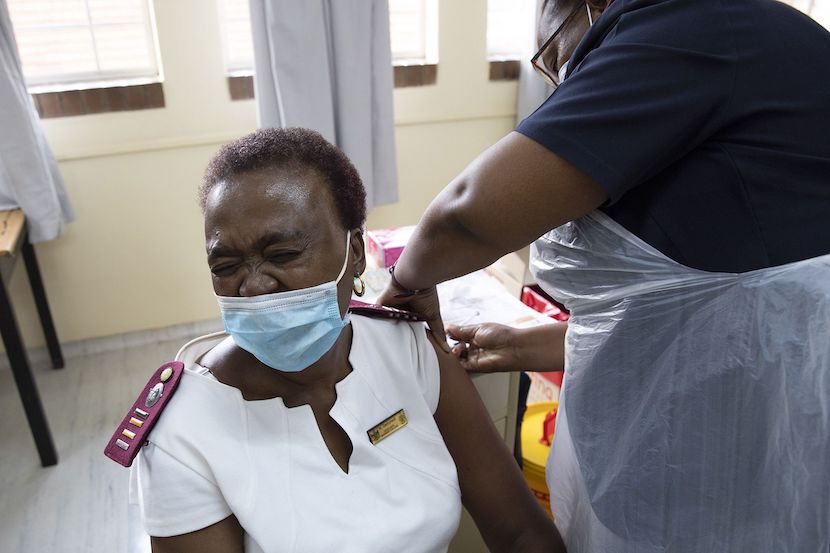 The South African government has recently started to rollout the Covid-19 vaccine. As part of phase 1, healthcare workers across South Africa are receiving the shot. According to Professor Veronica Ueckermann, South Africa aims to achieve herd immunity by the end of 2021. This would mean vaccinating 67% of the population (40 million people). Right now, this seems like a tall order. However, Ueckermann says ‘as more vaccines become accessible, the number of vaccination sites will increase. If there is continued collaboration between all sectors of the health system, this mammoth task is indeed achievable’. Currently, the government has secured nine million shots of the Johnson & Johnson vaccine, ‘with the first batch of 80,000 currently being rolled out to healthcare workers’. An additional 20 million Pfizer vaccines are expected to arrive by the end of March 2021, writes Ueckermann. This article was first published on The Conversation. – Jarryd Neves

By Veronica Ueckermann, University of Pretoria

South Africa has recently started its COVID-19 vaccine roll-out. Around the country, frontline healthcare workers are getting a jab of the Johnson and Johnson vaccine. More vaccines are expected from other manufacturers in March 2021 as the country prepares for mass vaccination. Ina Skosana spoke to Veronica Ueckermann, Adjunct Professor in the Department Internal Medicine at the University of Pretoria and Steve Biko Academic Hospital – one of the vaccination sites – about South Africa’s COVID-19 vaccination plans.

What are South Africa’s targets for vaccine coverage?

In order to obtain herd immunity South Africa is aiming for 67% coverage, which translates to about 40 million people. The National Department of Health aims to meet this target by the end of 2021. The roll-out of the vaccines will occur in a phased approach. The first phase is for the healthcare workers who are at the frontline of this pandemic and three to four times as likely as the general public to contract the disease. At the time of writing, more than 54,500 public sector health workers were diagnosed with COVID-19 and nearly 800 lives have been claimed.

Roll-out for healthcare workers started in Gauteng in February, with the Johnson and Johnson vaccine rolled out as part of a phase 3b study, to accumulate additional data towards obtaining regulatory authority approval, at Steve Biko Academic and Chris Hani Baragwanath hospitals. The South African Health Products Regulatory Authority has approved the trial currently happening and is expected to approve this vaccine soon for emergency use, following its approval by the US Food and Drug Administration. This will extend access to the vaccine to people beyond the study population.

The second phase of the roll-out will be for essential workers like teachers, law-enforcement officers and those involved in food provision. It is expected to start in late April or early May 2021. Essential workers have an increased risk of exposure, due to the nature of their work. This phase will also include people living in congregate settings (where close contact within confined facilities increases exposure risk) such as prisons. Also included in the second phase are those older than 60 or with co-morbid diseases (a group at risk for severe disease).

The third phase will target the rest of the general public, aiming to get to levels that will confer “herd immunity”. This is when a large enough proportion of a community is immune to an infectious disease to provide protection to those who are not immune.

How realistic is this?

There is a massive effort from both the state and private sectors to procure vaccines for South Africans. Vaccination training was done nationwide in preparation for this roll-out, and online platforms created to facilitate the efficient and rapid roll-out of life-saving vaccines.

The process is a dynamic one – scientists discovered recently that the B1.251 or 501V2 variant, which was responsible for South Africa’s second wave, was not adequately covered by the AstraZeneca vaccine, which brought the planned roll-out of this vaccine to a complete halt.

But it’s significant that in this short period of time the Johnson and Johnson vaccine was mobilised and is currently being rolled out to healthcare workers. The national department of health will continue to oversee the vaccine roll-out in both public and private sectors.

As more vaccines become accessible, the number of vaccination sites will increase. If there is continued collaboration between all sectors of the health system, this mammoth task is indeed achievable.

What supplies have it secured – and what are the timelines?

The health minister announced that nine million doses of the Johnson and Johnson vaccine have been secured, with the first batch of 80,000 currently being rolled out to healthcare workers. Additionally 20 million doses of the Pfizer vaccine are expected by the end of March 2021.

These vaccines will go a long way to reaching the target population, and with ongoing production and procurement the prospects of vaccinating all South Africans who need – and want – to be vaccinated are good.

What does the country have going for it from a distribution and infrastructure point of view?

There has been widespread preparation and training in order to accommodate the large number of vaccines that will need to be given. These platforms to support the roll-out are in the state and private sectors.

Private enterprises such as the Solidarity Fund have offered their support to the National Department of Health’s efforts to further increase the capacity for vaccination. Medical aid funds have pledged their commitment to the process.

In terms of human resources, South Africa has an excellent group of scientists and scientific networks. The manner in which the new variant was quickly discovered and characterised bears witness to this fact.


Furthermore, the country has a host of resourceful, dedicated and determined healthcare workers who are committed to making the vaccination roll-out and the curbing of this devastating pandemic a reality.

This article is republished from The Conversation under a Creative Commons license. Read the original article.