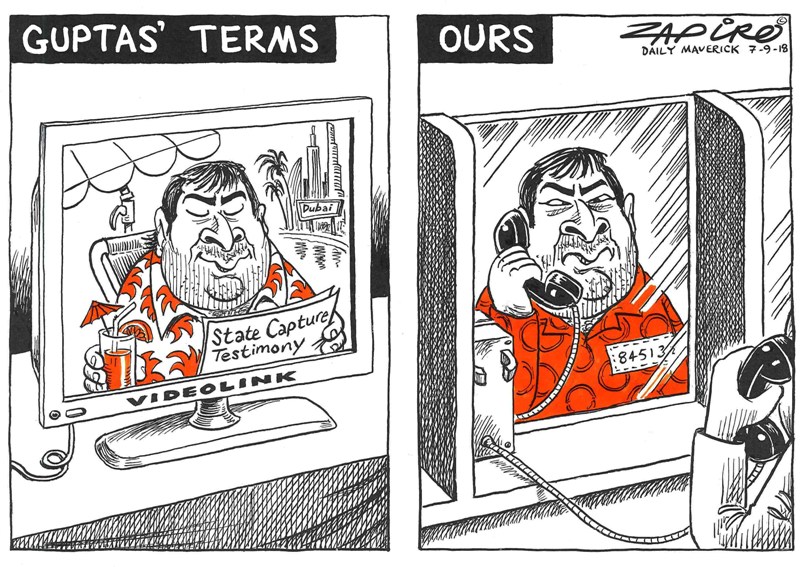 Just what does Interpol issuing a ‘red notice’ on the two Gupta brothers mean? Well, it’s the first step in getting them back to South Africa to face trial and follows the signing of an extradition treaty between SA and the United Arab Emirates, where they’re living a luxurious lifestyle, paid for by you and me. The wheels of justice grind slowly, especially when you can use ill-gotten gains to pay for shrewd lawyers and play the system, as witnessed with great distaste in the Gupta’s erstwhile local collaborator, Jacob Zuma. Here Bernadine Benson, an associate professor in police practice at Unisa, unpacks what the red notice means in the aftermath and ongoing looting of SA’s national fiscus. If you take issue with ‘ongoing’, please read newspapers that still practise investigative journalism, not those captured by one or another faction of the ANC or those so woke or inept that they cannot spell, let alone understand the term ‘politically correct’. Story courtesy of The Conversation. – Chris Bateman

Interpol red notice: what it means and why South Africa requested it

The International Criminal Police Organisation (Interpol) has issued a red notice for two members of the wealthy but now disgraced Gupta family, Atul and Rajesh Gupta. This could now pave way for their arrest and extradition from the United Arab Emirates to face fraud and money laundering charges in South Africa. The Guptas – who at their height owned a business empire spanning computer equipment, media and mining – are close friends of former president Jacob Zuma. A judicial commission of inquiry into state capture recently found that, with Zuma’s help, they orchestrated massive corruption. Thabo Leshilo asked Bernadine Benson to explain.

What is Interpol, and what does it do?

Interpol is an inter-governmental organisation, aiming to help connect police agencies across the globe. It’s headquartered in Lyon, France. Its primary purpose is to create a framework that enables policing and other law enforcement agencies across the globe to work together. These agencies can share information on crime, criminals and criminal activities through an advanced secure e-communications system.

Currently, the three primary crime programmes considered a global priority are counter-terrorism, organised and emerging crime and cybercrime. All Interpol actions are bound by the law of the country it may be assisting and are politically neutral.

Who belongs to Interpol and what’s its jurisdiction?

Interpol has 195 member countries including South Africa. At the click of a button, a country can reach out to the network and get assistance on transnational crime, criminals and other criminal threats from other members countries. The Command and Co-ordination Centre, its nerve centre, provides a 24-hour support service.

The four official languages used by Interpol are Arabic, English, French and Spanish.

Each member country has a National Central Bureau, which is the point of contact between it and the General Secretariat, in Lyon. These bureaus are staffed by the police officials of that country. They usually fall under the governmental department responsible for policing.

What is a red notice? Are there others?

A red notice is issued when a member country seeks assistance to locate and arrest an individual with the aim of having them extradited to face a criminal charge. The notice will be issued only if a valid warrant of arrest has been issued for the person in the requesting country. The other notices are:

In addition to these colour notices, Interpol can also issue a United Nations Security Council Special Notice to inform member countries when the UN has activated sanctions against an individual or an entity.

The last type of notice is the ‘diffusion notices’. They are like the colour-coded notices, except they are sent directly to a specific country or selection of countries by the member country.

South Africa has previously requested the extradition of wanted fugitives. A well-known example is the extradition of Shrien Dewani in April 2014 from Britain to be tried for his alleged involvement in the 2010 murder of his wife, Anni Dewani, while on honeymoon in Cape Town. He was eventually tried and acquitted in December of that year.

More recently, South Africa requested the extradition of self-proclaimed prophet Shepherd Bushiri and his wife from Malawi to face money laundering and other charges in South Africa.

A red notice has been issued: what now?

The issuing of an Interpol red notice is a process that can be seen to run parallel with the extradition process. The red notice is not an ‘international warrant of arrest’ but it will make international travel difficult for the person for whom the notice has been issued.

In the event of the Guptas crossing an international border, they will be flagged and their location will be known to law enforcement agencies. An Interpol red notice does not mean that the United Arab Emirates (UAE) must detain the Gupta brothers, who are in their 40s. Rather, it’s a forerunner for initiating a formal request for their extradition to stand trial in South Africa.

In June 2021, the Ministry of Justice and Correctional Services announced the

finalisation and ratification of the treaties on extradition and mutual legal assistance between South Africa and the UAE.

This paved the way for South Africa to start the extradition request for the two Gupta brothers, who ostensibly fled to the UAE to avoid prosecution in South Africa for massive corruption.

Extradition is often a time-consuming and drawn-out process consisting of complicated legal steps. The outcome of such an extradition request, however, will be determined in a court of law.