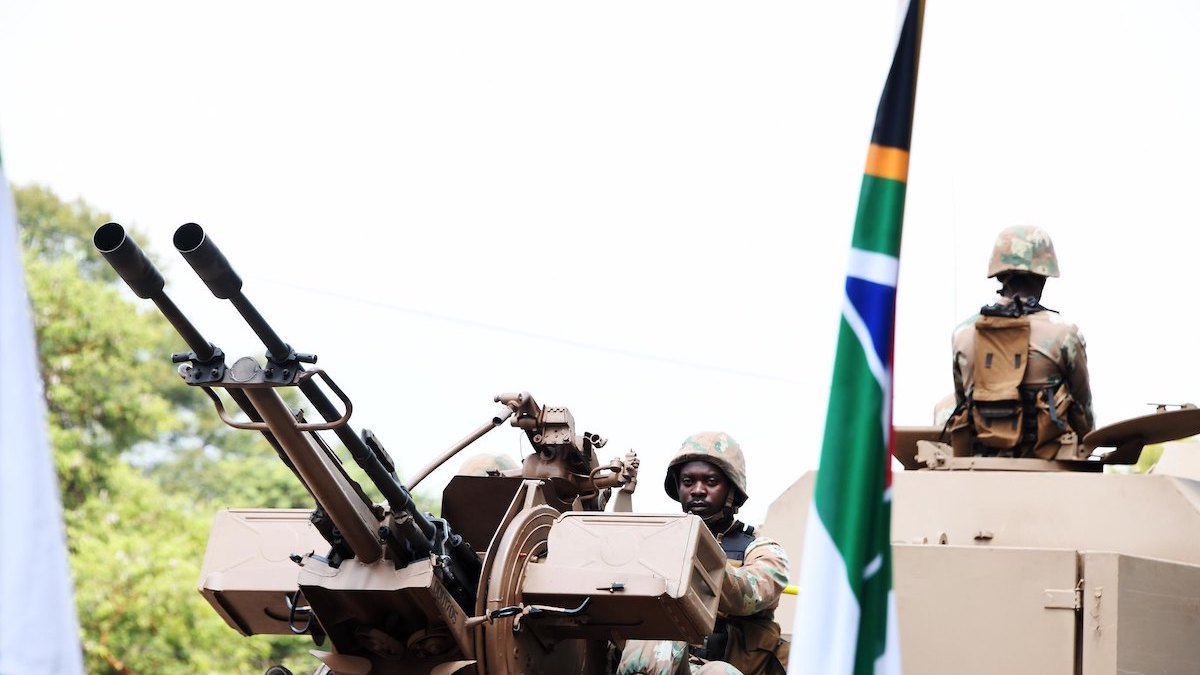 Even if you have to take the opinion of a former opposition chief whip with a pinch of salt, it’s hard to rebut when you look around you at the reality of an ANC-led South Africa today. We probably all agree that we have a beautiful country worth defending, even as its capacity to deliver basic services continues to fall apart and those entrusted with our welfare steal blind. Here Douglas Gibson, writing a piece that was first published in The Star newspaper, hones in on our once proud but tarnished defence force, so denigrated and politically debilitated that we’re unable to effectively support our disaster-prone citizenry, let alone defend ourselves against a potential foreign threat. Put bluntly, we couldn’t fight our way out of a paper bag. Gibson cites the 2015 Defence Review recommending defence spending at 2% of GDP. Instead, we spend 0,67%, because government economic policies produce no growth, and we therefore have few resources for defence. Even then, defence spending is often misguided, misdirected, misspent on bloated personnel numbers or looted. – Chris Bateman

ANC govt being punished in by-elections

There is scarcely any aspect of life run by that party that works properly.

Successive by-elections bring bad news and bad results for the ANC. Last week, this happened again. The DA and the EFF both won previously safe ANC wards (in the Northern Cape and on the West Rand) and almost everywhere the governing party suffered severe setbacks. The surprising thing is that no one was surprised, least of all, the ANC itself.

A political party that habitually described itself as the “glorious movement” and appeared impregnable for more than a generation, now looks decidedly ropey, poor at governing, riven by faction fighting, enjoying a reputation for corruption, and seemingly doomed to go down to defeat in the next election.

If that happens, the reason for it will be obvious. The ANC is not capable of governing; there is scarcely any aspect of life in South Africa where they are in charge that runs properly. From telephone services in 25 Gauteng hospitals that have not functioned properly for years, to the current dysfunction of the SANDF, everything the governing party touches is failing.

Most South Africans would like to be proud of our Defence Force. We know that when the police cannot cope, we look to our soldiers to be called in to restore order. When there are natural disasters, the army steps in. We have a war going on in Mozambique, our near neighbour. This could spill over as ISIS seeks to establish a foothold in Southern Africa.

We have pirate activity off our coast. Our coastline stretches for thousands of kilometres, with tens of thousands of square kilometres of fishing waters off our coast and huge exclusive economic zones. We live on a continent that is often tumultuous, needing humanitarian assistance and peace-keeping activity to prevent a descent into chaos.

And yet. This government has neglected the SANDF by starving it of resources. Its striking power is severely compromised. Its membership consists largely of rather overweight middle aged men. Some think of the SANDF as a glorified social welfare organisation providing jobs for the connected and card-carrying members of the party. DA Shadow Minister of Defence Kobus Marais recently described the SANDF as a “toothless tiger unable to fulfil its core constitutional mandate.”

Marais was not being unkind. Indeed, he was not merely criticising; as someone who cares deeply about the problem, he went on at length to state exactly what steps are needed. The SANDF’s prime mission equipment is in a sorry state – broken, out of service or rotting away. He said, “This is an embarrassing state of affairs, which exposes us to being ill-prepared on land, in the air and at sea.”

Whereas our Defence Review in 2015 recommended defence spending of 2% of GDP, we are spending only .67% because government economic policies have been a disaster, producing no growth and therefore no more resources for defence. Even then, the spending of the resources that are available is often misguided, misdirected, misspent on bloated personnel numbers or looted. Our main problem is that in most democratic countries, governments do not stay in power for generations. The voters have the gumption to kick them out after a decade or so and usher in a period of relief, renewal, rejuvenation. The ANC was never capable of transforming from a liberation movement (glorious or otherwise) to an efficient and effective governing party able to run a very complicated country. That they have proved. The voters are starting to realise this. They are following the process that has happened all over Africa: after about 20 or so years, liberation movements are rejected by the electorate and new governments are elected. Roll on 2024.