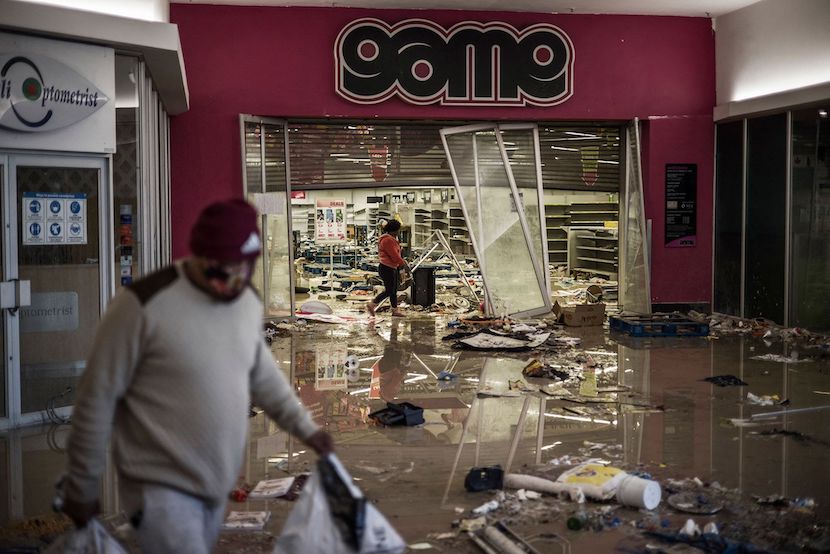 To help control (and eventually put an end to) the looting gripping KZN and Gauteng, government has said that troops in those provinces will increase from the previous figure of 5,000 to 25,000. Minister Khumbudzo Ntshavheni told reporters that fewer incidents of looting and violence are being reported, while “more than 1,700 people have been arrested.” Since last week, at least 72 people have been killed, making it the deadliest uprising South Africa has seen since the apartheid regime ended 27 years ago. Speaking to Bloomberg, Business Leadership SA has estimated the damages to be near the R5bn mark. “More than 200 malls were targeted, over 800 stores were looted and 100 were completely burnt,” said the CEO in an email to Bloomberg. – Jarryd Neves

By Loni Prinsloo and Monique Vanek

(Bloomberg) – South Africa will significantly ramp up the number of soldiers deployed to help quell riots following days of looting and destruction of businesses, after the government said a military presence may be helping to ease the violence.

Defence Minister Nosiviwe Mapisa-Nqakula told lawmakers that troops in the provinces of KwaZulu-Natal and Gauteng will be boosted to 25,000 from about 5,000 now, following a discussion between the government and opposition parties.

“We are seeing less incidence of violence and looting reported,” acting Minister in the Presidency Khumbudzo Ntshavheni had earlier told reporters in Pretoria, the capital. More than 1,700 people have been arrested, she said.

Protests erupted on July 10 after former President Jacob Zuma was incarcerated for defying a court order to testify before a graft inquiry and degenerated into a free-for-all in KwaZulu-Natal and Gauteng, two of the country’s main economic hubs. At least 72 people have been killed, making the uprising the deadliest since apartheid ended in 1994.

Marauding mobs have ransacked hundreds of businesses and destroyed telecommunications towers and other infrastructure, while transport networks and a program to vaccinate people against the coronavirus have been disrupted. The government logged 208 separate incidents of violence overnight Tuesday.

Business Leadership South Africa, one of the main business lobby groups, estimates that damages amount to more than R5bn ($343m) and counting for the retail industry alone. More than 200 malls were targeted, over 800 stores were looted and 100 were completely burnt, its Chief Executive Officer Busi Mavuso said in an emailed reply to questions.

“It will take 2 to 3 years to recover the infrastructure lost here,” Colin Coleman, former chairman of Goldman Sachs Group Inc. in Sub-Saharan Africa said in an interview to Bloomberg TV. “To restock these centres will take 10 weeks and we are going to have severe shortages for some time.”

Ntshavheni urged people not to resort to panic buying because there is enough food for everyone, and said the security agencies will escort vehicles carrying goods from KwaZulu-Natal’s Durban port, the country’s largest, to destinations inland to safeguard supply chains. She described the violence as “economic sabotage.”

“We are not at liberty to announce who are behind it,” she said. “If we do so we will jeopardise the investigation and possible prosecution of people.”

Some business groups have urged President Cyril Ramaphosa to give the police and army additional powers to end the violence, fearing that communities and private militias will mete out their own form of justice. Video footage published on Johannesburg-based radio station Kaya 959’s website showed private security guards firing live ammunition at a mob on Tuesday.

While the government has shied away from declaring a state of emergency – a measure the apartheid regime used to counter opposition to White-minority rule, Ntshavheni said it could review its stance depending on how the situation evolves.

Ramaphosa’s office said he’d consulted with the leaders of religious groups, business and political parties on how best to restore stability.

“The destruction witnessed by the nation hurt all South Africans, not only those in the affected areas, and it hurt the poor, the elderly and the vulnerable the most,” the president’s office cited him as saying. “Several areas of the country may soon be running short of basic provisions following the extensive disruption of food, fuel and medicine supply chains.”

The turmoil has exacerbated economic hardship caused by the coronavirus and associated lockdowns, and rattled the financial markets. Economists from accounting firm PwC estimate that the upheaval could shave 0.4 of a percentage point from the nation’s gross domestic product.

The rand steadied on Wednesday after plunging to the weakest level since April a day earlier. The currency was 1.8% stronger at 14.47 per dollar as of 8:25 p.m. in Johannesburg. A foreign exit from South African stocks has gathered pace, with non-residents selling R4 billion of local equities on Tuesday, the largest outflows since November.

Paper producer Sappi, building supplies company Cashbuild and state port and freight rail operator Transnet have joined a long list of firms whose operations have been interrupted. Hapag Lloyd AG told customers that it’s shutting some of its container-shipping facilities.

Retailer Mr Price Group said 109 of its stores were entirely looted, and another 539 were closed, while fast-food restaurant operator Famous Brands said 99 stores have been damaged and non-operational.