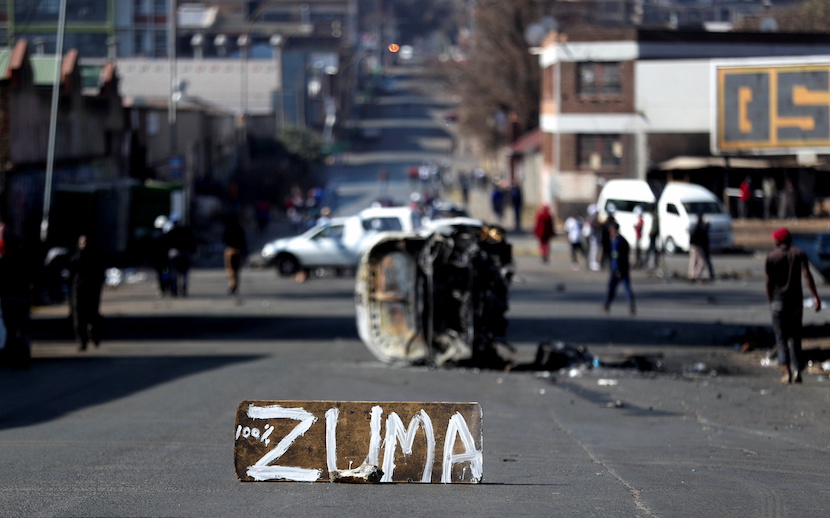 There’s no doubt on a joint reading of Zondo’s second State Capture report and the report by the presidential probe into the July 2021 civil unrest, that the fractious, rapacious and dysfunctional ruling party is unfit to govern. That’s not an emotive opinion, but a conclusion anyone can draw after reading both reports, some of their highlights featured below. We constantly talk of ‘government’ as a single holistic entity existing to serve those who elected its’ political leaders. It isn’t and it doesn’t. Ever since Zuma gained and lost power, the two ANC factions have used, abused and fashioned every possible lever of government to their own ambitions, pockets and agendas. Hardly any service delivery, corruption, insecurity, worsening poverty, inequality, urban migration, and a fragile, unreliable power grid, are ignored in favour of internecine party battles for supremacy. The unrest report finds cabinet hugely wanting. Story courtesy of the Daily Friend. – Chris Bateman

A comprehensive failure of governance, and government

While the country digests the reports of the Zondo Commission, detailing how the carcass of the state was carved up under the so-called State Capture project, another report was made available to the country on Monday. It deserves to be studied with as much diligence as those put out by Judge Zondo. Indeed, the two might fruitfully be read together.

Entitled drily Report of the Expert Panel into the July 2021 Civil Unrest, it is dated 29 November 2021. Why it has been withheld until now is not clear (when a journalist enquired, a presidential spokesman said that he’d ‘look into it’).

As an account of what took place, the report offers little that is new. Eight Days in July, a book by Qaanitah Hunter, Kaveel Singh and Jeff Wicks, has already given those interested a near blow-by-blow account of what went down, drawing on – among other sources – leaked intelligence documents.

In fact, on access to information, the Report is rather disappointing. It admits upfront: ‘We record that whilst the security services informed us about the intelligence reports they had produced and submitted to various clients, we did not have sight of these classified documents, and could therefore not make a determination of the quality of intelligence provided.’

Elsewhere, the authors confirm that they were unable ‘to meet with Ministers serving in the NSC [National Security Council] collectively, though we asked.’

One can’t help reading into this a lukewarm commitment on the part of the authorities to assisting the commission in its work.

Nevertheless, this is an official report – not a paper by an academic, or a commentary by a journalist – produced on the request of the president to probe what must rank as one of the lowest points of South Africa’s post-1994 history. For those with long memories, the visuals from July last year could not but bring to mind the xenophobic riots in 2008, or the low-intensity civil war (sometimes, not so low) that wracked the country in the early 1990s – above all, because it signified that the state had effectively lost control over significant parts of the country.

If the Zondo Commission has described the pathologies in the inner workings of the state, this report described them on visible display, intruding violently into the lives of South Africa’s people.

The report is an indictment on the state of governance and of those in charge of it. Perceptive readers may recall that a few years ago, much concern was expressed about the rise of the ‘securocrats’ and how this phenomenon posed a dread danger to our democratic institutions and civic freedoms. A valid and sage concern, although whatever it produced proved impotent in the face of last year’s riots.  ‘The question that must surely arise,’ says the Report, ‘is why, with all the security capacity available to the State, and all the systems in place for coordination at the national and provincial levels, the government and the security structures were not able to anticipate and prevent the widespread violence.’

In broad terms, the Report records the mobilisation around President Zuma’s incarceration, with at least some element of planning for an outbreak of violence. This is, however, located within a context of ‘multiple crises’. These are set out on page 37:

These preceded any of the pro-Zuma politicking that may have provided the initial spark to the riots. These are matters that should have been at the centre of policy and governance. Indeed, the Report notes that warnings of the combustibility of these factors, even with a major political crisis, had long been received by the National Intelligence Coordinating Committee. It is a testimony to just how central intelligence is to the failures that made the riots possible that the word – ‘intelligence’ – is used no fewer than 234 times in the Report’s 154 pages.

‘However,’ the Report continues, ‘it appeared that not many members of the Executive, at all levels of government, appreciated the meaning of the warnings raised in the different NICOC reports, and accordingly largely ignored them.’

It goes on to describe how clear evidence was available – not only to state agencies, but to business and community groups – that violence was imminent with the pending incarceration of former President Zuma. This represented a catastrophic ‘intelligence failure’, not only in the sense that the threat went unheeded and was not prepared for, but because it also seemed to signify a reluctance on the part of the security community to gather intelligence on prominent political figures, dysfunctional working relationships between key people at the helm of this system, and a failure on the part of the executive to coordinate plans and give leadership at this time.

Meanwhile, the conduct of the police left a great deal to be desired. ‘The testimonies we received from civil society organisations and the countless media reports indicate that the people felt abandoned by the State during the violence, or that the police were simply not up to the task of protecting the public. Even the police admit that they were hopelessly outnumbered, and outmanoeuvred and could not keep pace with the fast-moving, dynamic and dangerous conditions.’

It even appears that at times, police officers joined in the looting.

Scale of the violence

This is ascribed not only to the scale of the violence, to the lack of equipment or to the ‘pitifully’ small numbers who were trained properly to deal with public order issues – although these were clearly important issues: ‘We were informed that they have access to only one water cannon per province, they have no air capacity, they ran out of rubber bullets.’ It also involved a breakdown of trust and cooperation with communities, and poor leadership, not the least important aspect of which is the ‘strained’ relationship between the minister of police and the National Commissioner. The fraught relationship ‘is not conducive to providing coherent direction and leadership to police officers they are meant to lead, and to the public at large.’

Beyond this, the Executive comes in for some sharp words, something that media coverage of the Report has noted. Whatever the failure of other bodies, the Executive ‘carries some of the blame too and must take responsibility for its lapse of leadership.’ It describes a generally reactive if not lackadaisical attitude at the outset, a failure to distinguish between political and operational authority, and a sad lack of coordination. The picture is one of confusion.

One of the most striking elements of the report is just how absent President Ramaphosa is from its narrative. Very little is said of his role or conduct, and much of this relates to his (tardy) decision to deploy the military. His seems to be largely a background role, in office but not really engaged. This is an impression that one takes away from Eight Days in July too. (The Report at one point says that ‘the President was proactively managing the crisis as it unfolded’, although not much would seem to support that assertion.)

But perhaps the sharpest and most important message to be taken from the Report is that the conduct of the African National Congress has come to threaten the country as a whole. This message comes up several times.

‘Did not mince their words’

It notes under its comments on its interaction with the business community: ‘The business delegations did not mince their words in asking us to communicate their frustration that the inner conflict of a political party has now become a threat to the stability of the State.’ It records the views of civil society activists that ‘the culture of violence and criminality within the ruling party was having a negative impact on communities and had to be brought under control.’

Finally, towards the end, the report is explicit: ‘It would be remiss of us if we did not express the strong view expressed by some of the groups we met, to the effect that the internal differences within the governing party, the ANC, contributed to the unrest and should be addressed as a matter of national security now.’

This draws a connection to the work of the Zondo Commission, for much of what transpired under the rubric of state capture cannot be understood without an appreciation of the conduct of the ruling party, its deliberate politicisation of institutions and its appropriation of state resources to feed a voracious patronage system. This was by design not by chance, and ultimately the prerogatives of party (and party faction) have well-nigh displaced considerations of governance and administration.

In July, South Africa paid a steep price for it.

Interestingly, the Report discusses the claims made during the riots that a group of mastermind instigators had been identified. They have never publicly been identified, still less arrested: ‘The fact that none of the organisers or real instigators of the violence have been apprehended is a matter of concern. If there is such intelligence that has been shared by the intelligence services, the President should address any systemic weaknesses that may have caused such intelligence to escape his review. If the President has received intelligence about the instigators, the question would be why has he not assured the nation that the government will act on this matter.’

The phrasing of this passage indicates that even for a panel appointed by the President himself certain key issues remain unresolved. Do those masterminds exist? Will the President find the courage to level with the country about this? Will he have the inclination to take action? Indeed, given the trajectory that brought the country to this point, could he do so even if he so wished?