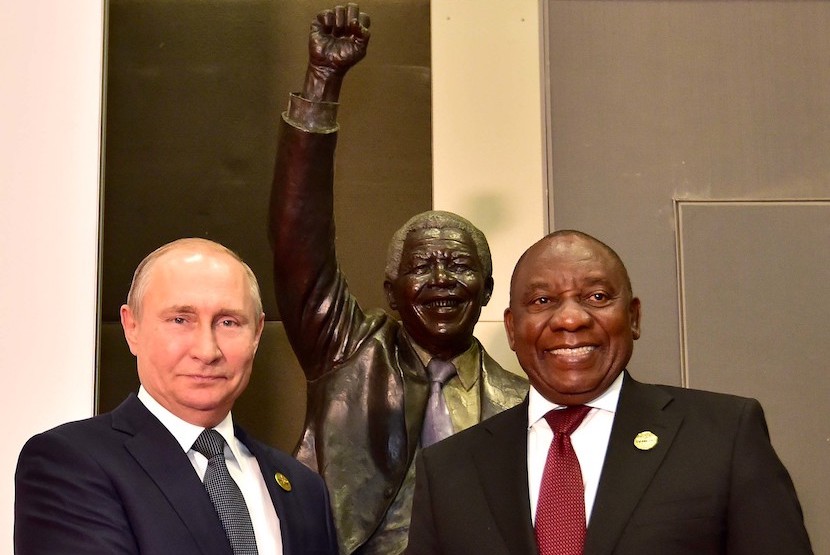 The ANC government’s response to the Russian invasion has been that it wants to be neutral. President Cyril Ramaphosa has decided to sit on the fence. In a call to Russian President Vladimir Putin, he thanked the man who invaded Ukraine, for taking his call, “So that I could gain an understanding of the situation that was unfolding between Russia and Ukraine.” While he was talking to Putin: his defence minister, Thandi Modise, attended a reception at the Russian Embassy in Pretoria and the ANC celebrated 30 years of Russian–South African friendship at a drinks reception in Cape Town. The overriding impression from the West is that South Africa is not neutral; that it has taken the side of Putin. While Ramaphosa told Bloomberg the benefit of his neutral position is that he can talk to both sides, he has not engaged with the Ukrainians. Criticism against South Africa’s foreign policy has come from many quarters. Ukrainian UN Ambassador, Sergiy Kyslytsya lambasted South Africa when the country introduced a resolution to the United Nations General Assembly titled ‘Humanitarian situation emanating out of the conflict in Ukraine’ and it made no reference to Russia or President Putin and their role in the war. And in the vacuum the ANC left in its foreign policy, opposition parties are filling in the gap with both DA leader John Steenhuisen and ActionSA’s Herman Mashaba standing firm behind the Ukrainian people. In this article, Ray Hartley and Greg Mills write that the country needs to go back to a human rights-driven foreign policy and cite an example of how President Nelson Mandela followed this principle when he mounted a campaign against Nigeria’s Generalissimo Sani Abacha. – Linda van Tilburg

On Russia and Ukraine, the opposition, not the ANC, speaks for SA

By Greg Mills and Ray Hartley*

How can South Africa’s foreign policy credibility be restored? The starting point ought to be to return the country to the human rights-driven foreign policy of the Mandela era most spectacularly illustrated by the campaign he mounted to get the Commonwealth to isolate the brutal dictatorship of Nigeria’s Generalissimo Sani Abacha following the execution of the activist Ken Saro-Wiwa.

The Russian invasion of Ukraine has cruelly exposed the poverty of the South African government’s foreign policy and embarrassed the country with a series of public flip-flops, which ended with SA being among the minority of African countries to abstain from condemnation of Vladimir Putin’s actions.

The Department of International Relations first issued a public statement condemning the invasion but this was quickly followed by back-pedalling culminating in the SA ambassador to the UN being instructed – presumably by President Cyril Ramaphosa – to abstain.

The subsequent justification of this position by Cyril Ramaphosa was confused and confusing. Addressing parliament, he blamed NATO for the invasion (although he never called it an invasion). “The war could have been avoided if NATO had heeded the warnings from among its own leaders and officials over the years that its eastward expansion would lead to greater, not less, instability in the region.”

Not one to leave waters unmuddied, Ramaphosa added as an afterthought, “We cannot condone the use of force or violation of international law.” Was he referring to Russia? Ukraine? Mozambique?

Thanking His Excellency President Vladimir Putin for taking my call today, so I could gain an understanding of the situation that was unfolding between Russia and Ukraine. pic.twitter.com/jzuWXyIjfL

Ramaphosa’s ambivalence was underlined by a fawning tweet following a telephone conversation with Putin on 10 March. “Thanking His Excellency President Vladimir Putin for taking my call today, so I could gain an understanding of the situation that was unfolding between Russia and Ukraine.”

Thank you to President Xi Jinping for a productive call earlier today, where we exchanged views on several issues of global importance. We expressed our concern about the conflict in Ukraine and the need to end hostilities and find a lasting peace. pic.twitter.com/33aXF1HBSt

Perhaps realising that China might feel left out, he called President Xi Jinping nine days later and produced a similar tweet. “Thank you to President Xi Jinping for a productive call earlier today, where we exchanged views on several issues of global importance. We expressed our concern about the conflict in Ukraine and the need to end hostilities and find a lasting peace.”

The decision to address Putin as ‘His Excellency’ without according Xi the same honorific has not gone unnoticed in the diplomatic community where such statements are dissected and analysed, particularly by the word-perfect Chinese.

Ramaphosa’s fumbling has opened the way for a proper discussion about South Africa’s foreign policy and the Leader of the Opposition, John Steenhuisen, has responded with perhaps the clearest outline of how the country ought to position itself.

“There is no moral ambiguity in this situation. The line between wrong and right has not been this clearly drawn since the 1940s, and the vast majority of nations were quick to take a position on the right side of that line.”

And, referring to the confusion in government, he said: “No-one believes that the ANC has not already picked their side. No sensible person can fall for their ruse of ‘neutrality’.”

He pointed out that when the defence minister and chief of the defence force attended a cocktail party to honour the Russian military on the day of the invasion, it was clear which side had been chosen.

He quoted social development minister, Lindiwe Zulu, who stated that “Russia is our friend, through and through,” even as Russia bombed residential areas.

“Perhaps the ANC’s own oligarchs – those who have built their fortunes on dodgy political connections and corruption – oppose action against Russia’s oligarchs because they fear that their day of reckoning will also come?”

The starting point ought to be to return the country to the human rights-driven foreign policy of the Mandela era most spectacularly illustrated by the campaign he mounted to get the Commonwealth to isolate the brutal dictatorship of Nigeria’s Generalissimo Sani Abacha following the execution of the activist Ken Saro-Wiwa.

It is noteworthy that it is the official opposition and not the ANC, which believes that this return to foundational principles of the Constitution is essential to restore the country’s global credibility.

Steenhuisen also pointed out the ANC was mistaken if it believed most South Africans sided with its failure to condemn Russia, citing The Economist poll – the first to properly measure local responses to the war – which found that “the overwhelming majority of South Africans are against, or strongly against, Russia’s invasion of Ukraine”.

“Ordinary South Africans are good people. Most are appalled by what is happening in Ukraine right now and have deep sympathy for the innocent people who are being attacked and killed by a tyrant. And most South Africans are mortified that their government has chosen the side of the tyrant.”

What Ramaphosa appears to have missed is something that the Kenyan representative to the UN, Martin Kimani, observed. Speaking after Russia recognised the independence of two regions in western Ukraine prior to the invasion, he said: “At independence, had we chosen to pursue states on the basis of ethnic, racial or religious homogeneity, we would still be waging bloody wars these many decades later.

“Instead, we agreed that we would settle for the borders that we inherited, but we would still pursue continental political, economic and legal integration. Rather than form nations that looked ever backward into history with a dangerous nostalgia, we chose to look forward to a greatness none of our many nations and peoples had ever known.

“We chose to follow the rules of the Organisation of African Unity and the United Nations charter, not because our borders satisfied us, but because we wanted something greater, forged in peace.”

It was a powerful moment not least because Kimani also underscored that Russia’s ambitions were nothing less than modern colonialism and no less odious than the old type with which Africa was very familiar.

Kenya – and not South Africa – has provided leadership abroad and domestically it is Steenhuisen, not Ramaphosa, who has spelled out where the country ought to stand.

What is curious is that even if human rights are put aside as a compass, South Africa cannot fall back on the explanation that it is taking a stance based on its interests.

Russia’s trade with South Africa is small. Phillip de Wet has done the maths in an article on Business Insider. South Africa’s trade with Russia and its allies totalled R15.7bn in 2021 compared to R1.131 trillion with NATO countries.

Even if trade with India and China is added to the Russian figure, this amounts to only 57% of the country’s trade volume with NATO countries.

So even in an amoral, calculating world where such numbers determine policy, Ramaphosa’s stance would be irrational. Citing Lord Palmerston, who said that countries have no permanent friends or enemies, only perpetual interests, the DA leader noted, “Ukraine has reminded us that those interests can also be long term and values based.”

“Let me put it this way,” he added in posing a challenge to the donor community, which has a habit of turning a blind eye to authoritarians if they believed to safeguard their short-term interests, “if the much-overdue Western action on Ukraine is to be meaningful, it has to take in Africa along with other regions.”

And as he pointed out on his own country: “If the ANC did indeed speak for all of us on the global stage, our shame would be huge. But they don’t. And I trust that enough people out there know that the people of South Africa are better than that.”