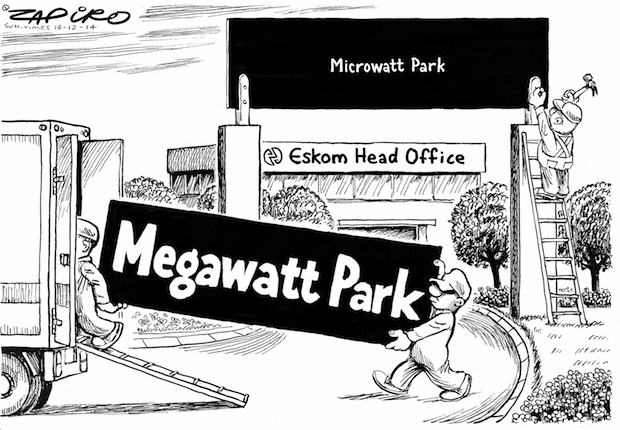 Well that didn’t last long, did it? Two days after claiming Public Enterprises Minister Lynne Brown was orchestrating a plot against him, Eskom chairman Zola Tsotsi has left Megawatt Park. The UK-trained chemical engineer, who was involved at Eskom full-time between 1997 and 2000 and then again as a corporate consultant between 2000 and 2004, announced this morning that he has severed his ties. This is the second time he has left Eskom. Ten years ago he moved to the mountain kingdom to chair the Lesotho electricity Authority before returning to chair the SA utility in 2011. – AH

JOHANNESBURG, March 31 (Reuters) – Eskom Chairman Zola Tsotsi has stepped down, the South African power utility said on Tuesday, after the board accused him of acting improperly by suspending the chief executive.

Eskom’s board said that with the departure of Tsotsi, who had dismissed the accusations as minor issues, the company could focus on challenges facing it and regain the confidence of its stakeholders.

“The board and the chairperson held a constructive discussion about charting a way forward for the power utility. Mr Tsotsi agreed to step down as a director and chairperson of the board,” Eskom said in a statement.

State-owned Eskom has implemented regular power cuts this year to prevent the national grid from being overwhelmed as Africa’s most advanced economy faces its worst energy crisis since 2008.

The company’s CEO and three other senior executives were suspended earlier this month while an inquiry was conducted into its operations.

Standard and Poor’s cut Eskom’s credit rating to junk status, saying the suspensions had led to a loss of confidence in the utility’s corporate governance.

“Mr Tsotsi indicated that the board had unity of purpose and that his decision to step down was in the interest of the company and the country and was done in order to allow the board to focus on the core issues facing Eskom,” the Eskom statement said.

Eskom’s chief executive, Tshediso Motana, has filed a complaint of unfair suspension with the national labour arbitrator. Motana was appointed to his post in August.