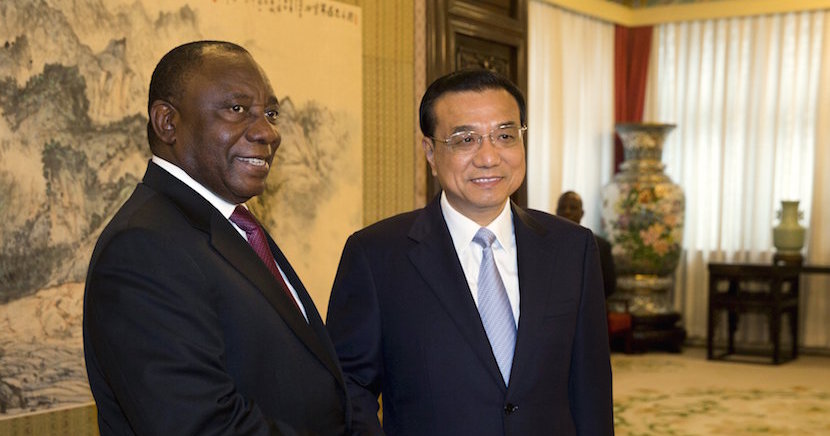 If you listen closely, there is much to glean from the seemingly trivial.

In Parliament yesterday, Deputy President Cyril Ramaphosa provided oral replies, including feedback on his recent official visit to China. For the most part, the answers were what you’d have expected. But then Cyril deviated, dropping hints of China’s approach to State Owned Enterprises “worth noting”.

Here’s the interesting bit: “The success of many of China’s SOEs is due in part to the reform of their shareholding system. In some cases, this has included the introduction of strategic investors and the listing of some SOEs in capital markets.”

Could Cyril have been hinting SAA, Eskom, Transnet and other perennial underperforming SOEs may be getting the same treatment? If that’s the concrete result of his China adventure, for taxpayers, the trip will prove a great investment.

I see what you did there, ‘investment’! That’s a brilliant way of looking at it. I wonder whether the Chinese approach also involved opening it up to private investors before listing? Previously I made a bit of a buck with Telkom when their share price grew, so I would be curious to how this plays out with the likes of Transnet which is playing a key role regionally.

China does not have BEE/reverse Apartheid to contend with.

There is no way any sane investor would buy these shares on the JSE unless
all the ANC deployed cadres who have screwed them up were fired and
management appointed on ability alone.

Cyril hints at new approach to ownership of Eskom, SAA and other SOEs. Don’t hold your breath. Nedlac and the unions still have to give the nod/nay… Which is the FINAL NOD/NAY. No second round discussions allowed…! Sensibility tells me NAY.

Why can’t you lose weight? Spoiler: it’s not because you’re greedy or lazy

Even cheaper Chinese steel could kill ArcelorMittal. Does Pretoria care?