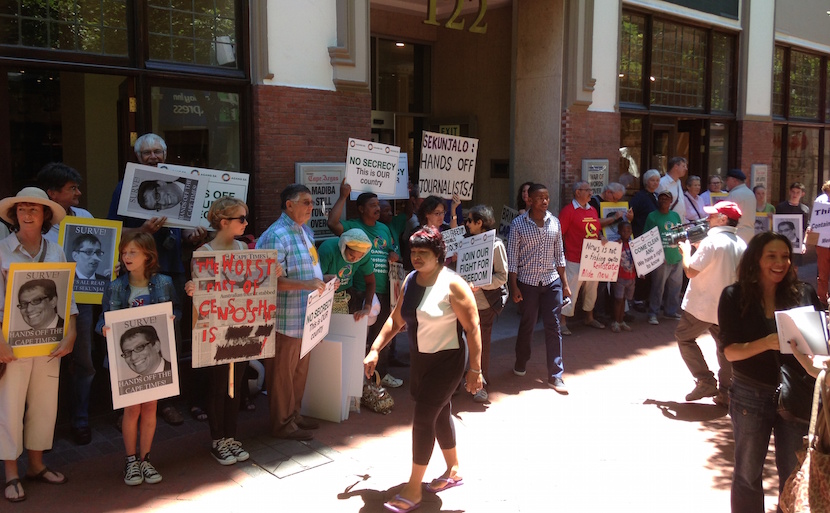 It’s another modern day David versus Goliath story. And in this case many may agree with former Cape Times editor Alide Dasnois that the settlement could have been reached two years ago. But it may have been delayed as Iqbal Survé, chairman of the Independent group, threatened to use his ‘billions’ to destroy her in the meatime – hoping to sweep the whole incident under the rug. But the resolve from Dasnois and her supporters, and the impending day in court, may have been too much for Independent and Survé to deal with. But the damage has been done, the 67-page tell all affidavit is public knowledge, and South African readers can make up their own minds and draw their own conclusions as to why Dasnois was fired. The independent says the reaction to the coverage of Mandela’s death was a matter of “a difference of opinion”. The story on Sekunjalo Marine Services, which had been “improperly” awarded a maritime tender, may be another. – Stuart Lowman

Dasnois’s legal team received the settlement offer on Friday, giving them and Dasnois only the weekend to consider it.

“But it could have been made two years ago,” Dasnois said when the settlement was announced at Cape Town’s Labour Court.

She had been accused by Independent chairperson Iqbal Survé of racism and “disrespecting” Nelson Mandela by publishing a four-page “wrap-around” special on the night of Mandela’s death.

Survé has now unconditionally withdrawn all accusations of racism and has conceded that the reaction to the coverage of Mandela’s death was a matter of “a difference of opinion”.

Dasnois maintained that the real reason for her sacking was that the Cape Times had carried a front page item noting that the Public Protector had found that one of Survé’s companies, Sekunjalo Marine Services, had been “improperly” awarded a maritime tender.

Papers submitted to the court also revealed that at a disciplinary hearing called by Independent Newspapers, Survé had accused Dasnois of racism and had pledged to use his “billions” to destroy her.

@alechogg Gosh…so there's hope for me in year nine Alec.

Because the issue involved freedom of expression and freedom of the media, the Open Democracy Advice Centre, Right2Know and other media freedom groups rallied to Dasnois’s support.

“Without the support of many journalists and friends and the financial help from groups such as the ODAC, I could never have maintained this fight for so long,” Dasnois said.

The danger existed that the matter could be “dragged on for several more years” had the settlement not been agreed to.

“I would have preferred an apology,” said Dasnois. “But I was prepared to settle for the withdrawal of his accusations of racism and the fact that I had not disrespected Nelson Mandela in the way I and my editorial team decided to cover his death.”

In fact, the four page special wrap-around produced by the Cape Times was regarded by Time magazine as one of the 14 best examples of print media coverage of the icon’s passing.

As part of the settlement, a joint statement was released in which Independent Newspapers confirmed “its ongoing commitment to the principles of press freedom”. – News24