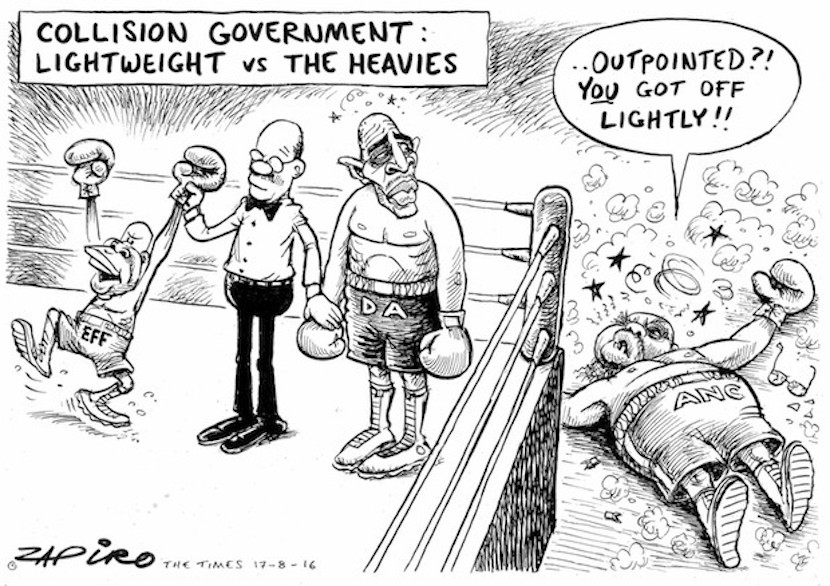 It has been a historic morning in South African politics with the Nelson Mandela Bay metro and Gauteng’s Mogale City municipality replacing ANC mayors with candidates nominated by the DA. While the appointment of Athol Trollip in NMB was celebrated last week, but that of his counterpart Lynne Pannall in Mogale City was in the balance right up until the votes were counted. The IFP voted for the ANC nominee for Speaker, but switched sides to a clearly delighted DA/EFF alliance to secure Pannall’s mayorship. In NMB, the DA got 46.7% of the vote compared with the previous ruling ANC’s 40.9%. The DA won 57 of the 120 seats (ANC: 50) so only needed the support of four from the 13 won by smaller parties. In Mogale City, however, it was very different with the opposition requiring all of the non-ANC seats (DA 27; EFF 9; VF+ 2; and IFP’s 1) to surpass, by a single seat, the ruling party’s 38. – Alec Hogg

Port Elizabeth – The near chaotic first meeting of the new council of Nelson Mandela Bay metro on Thursday was eventually brought to order, after reported attempts by the ANC to stop the meeting from going ahead, followed by the party demanding to be let into the hall.

Minutes after the DA’s Athol Trollip was elected the new executive mayor however, ANC members rose and walked out the hall, amidst loud cheering.

Finally the call for nomination for a speaker was put to the floor, causing an ANC councillor to take to the floor to call for a point of order. Mettler refused to acknowledge the councillor, saying points of order need to be raised with the new speaker.

One nomination was received, and DA councillor Jonathan Lewack was elected unopposed.

Lewack immediately started cracking the whip, calling the audience to order and waving around the rule book to warn them about their behaviour. He refused to acknowledge ANC councillor who stood up to object.

Lewack pointed to Section 28, and said if he determined that the councillors’ behavior was disruptive, he could have the councillor removed. – News24