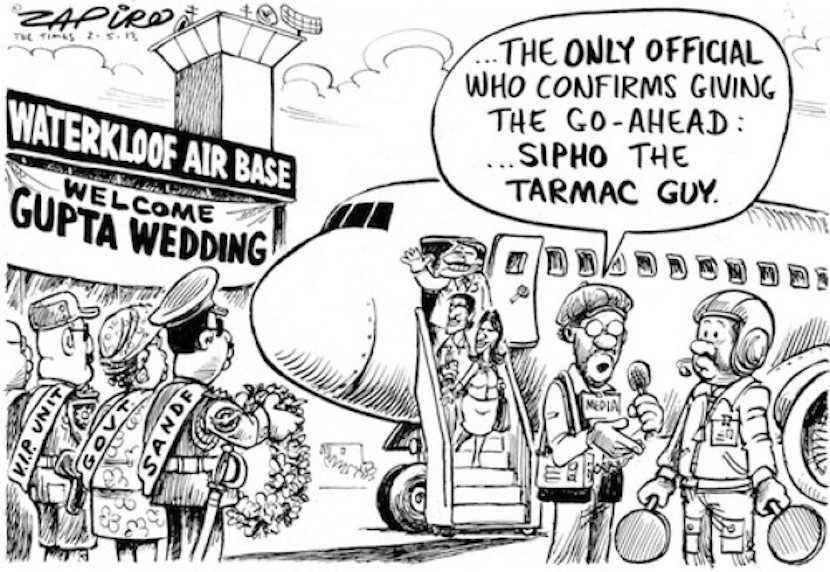 Life has a way of arriving all at once. At least for South Africans. First came the live television transmission of a well-attended, emotional “People’s Assembly” where  Anglogold chairman Sipho Pityana and other ANC stalwarts called Zuma’s spade a bloody shovel.

At the same time tens of thousands marched through Pretoria calling for an end to the Zuma Presidency. And all the while Gupta puppets made a last vain effort to block the State Capture report filed on her last day in office by former Public Protector Thuli Madonsela. As the court ruled the report be made public, it is obvious to all why Zuma, Van Rooyen and Zwane had followed what is surely their last demeaning Gupta order.

In amongst all this, during an explosive interview with political and business insider Dominic Ntsele, he told me how Gupta gall reached an unimaginable level three years back. The family’s infamous commandeering of the Waterkloof Airforce base was only Plan B. They had originally demanded ACSA clear OR Tambo International for their wedding guests – cancel flights or keep other aircraft in holding patterns so their Indian visitors could be collected from the tarmac.

ACSA’s unbribeable Bongani Maseko turned them down. The Guptas had expected to exact their revenge later today when Maseko is scheduled to appear in front of what Ntsele says is an internal Kangaroo Court on trumped-up charges. After Madonsela’s Masterpiece went public yesterday, you have to wonder whether ACSA’s captured directors will still proceed.