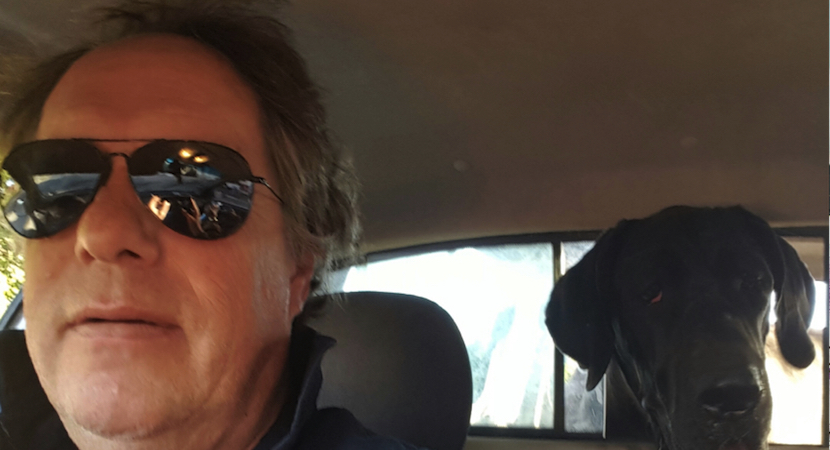 A compilation of tributes to Professor Matthew Lester

Yesterday’s email from the director of Rhodes Business School was like an unexpected stomach punch. Owen Skae wrote that the inimitable Matthew Lester had passed away. The chartered accountant turned tax prof, lifelong Great Dane fan and Biznews columnist had passed away shortly after being admitted to hospital with a chest infection. This shouldn’t have happened. Matthew wasn’t someone you’d expect to die in his mid-50s.

He lived at the coast because he loved teaching young people about tax, Rhodes University, fishing and being away from Joburg, not necessarily in that order. In a piece for us three months ago he admitted spending December mostly sleeping off 2017’s stress. But Matthew entered the new year with his usual abundance of positive energy, quick with a joke to help unpack complex issues for the rest of us.

A member of the Davis Tax Commission, his natural optimism shone through in the passionate argument against an increase in VAT ahead of the 2018 Budget. He also regarded the election of Cyril Ramaphosa as offering a promising new dawn for his beloved South Africa. The new leader seemed to inject fresh life into Matthew’s ample frame, encouraging him to hit the keyboard with renewed vigour, flooding us with contributions.

I will desperately miss my larger-than-life friend from Kenton-on-Sea. The loyal pal who switched his popular Sunday Times tax column to Biznews as a show of support. The possessor of a brilliant mind, forthright opinions and font of creative business ideas who never learnt how to pull a punch. This St Johns old boy was a mensch. In every way possible. Rest in peace Matthew. Your nation is a heck of a lot poorer today.

Rhodes University has learned with deep shock and sadness about the passing on today of Professor Matthew Lester after a short illness.

Prof Lester was a qualified chartered accountant and had worked at South African Revenue Services (SARS), BDO, Department of Accounting, Rhodes University and at the Rhodes Business School where he specialised in the fields of stewardship, governance, taxation and entrepreneurial law. In addition, he lectured throughout South Africa on taxation, national economics, stewardship, governance, and related matters.

In July 2013, Matthew was appointed by the Minister of Finance to the Davis Tax Committee investigating the structure of aspects of the South African tax system. During this assignment, he chaired the sub-committees investigating the Small and Medium Enterprises sector and estate duty.

Widely acknowledged as one of the foremost tax experts in South Africa, Prof Lester has written regular articles for the Rhodes Business School website (www.criticalthought.co.za), biznews.com and has published various other extensive journal articles on corporate governance.  For many years, he wrote the very popular column Tax Talk in the Sunday Times.

In 2001, he received the Rhodes University Vice-Chancellors Award for distinguished teaching. In 2009, Matthew received the South African Institute of Chartered Accountants (SAICA) Southern Region Honours Tie for his contribution to the continuing education of chartered accountants in South Africa.

Since 2009, Matthew has been developing e-learning and blended learning solutions to supplement lectures and class materials. In 2018, it was anticipated that this material would be developed to a stage where the ‘Stewardship and Governance Module’ of the Rhodes Business School’s MBA programme would become more universally accessible and understandable to all South Africans.

Director of the Rhodes Business School, Professor Own Skae, described Prof Lester as “a larger than life character. He was an extremely dedicated teacher, kind and generous. Notwithstanding the fact that he was one of South Africa’s foremost tax experts, his gift was to explain this in the easiest of terms. Behind all of this was a man deeply committed to social justice”.

“We will miss him in many ways, but most of all his ability to make us laugh,” added Prof Skae.

On 17th February Matthew Lester sent me the following link to a YouTube video he had made “What Does Zuma leave behind”.

The song track to this video is a favourite of mine – Time to Say Goodbye, by Andrea Bocelli. Who knew that, less than a month later, I would be bidding Matthew goodbye? To say that the news of his death was a bolt out of the blue is something of an understatement. Many memories came to mind last night during my quiet time of being forced to say goodbye to Matthew.

Matthew and I have been friends for a long time.  We met when I lived on the opposite side of the Bushman’s River from him – in 2008. It’s easy to see why we became friends – we both like to question the status quo, both chartered accountants, both love the sea and, mostly, both love dogs.  In fact, so much so that he did not bat an eyelid when I brought my dog to a dinner we had arranged in Cape Town not that long ago. We were both happy to be inconvenienced for the sake of Lexi being with me. Here is my favourite picture of him that shows his love for his dogs – they even featured in his lectures, presentations and videos!

I believe that we leave this earth when we have done what we came to do. Even if this is true, Matthew’s passing is a loss to me – I will miss his friendship and his excellent sense of humour. He had a certain shyness, despite his ease with public speaking. Matthew certainly was not the typical accountant, but that was part of his charm.  A quick glance at Prof Matthew’s Wall shows his irreverence.

His desire to change education and continual questioning of how we can do things better was refreshing- a far cry from the academic norm. He wrote:

“There have been massive advances in educational technology. But South Africa has been slow on the uptake, with many educators still asking, ‘Where’s the chalk and podium?’ Yes, some educators want change, but not in their lifetime.”

Matthew was at the forefront of change in education. Few people realise how much time and money he invested in providing much of what he has done for free – simply because he cared about education and people. His presentation style was unmatched – interesting, always different and, most importantly, made simple so that his audience did not leave his presentation feeling like fools who knew nothing.

Matthew, your death leaves me with the uncomfortable feeling that I did not make the time to communicate frequently enough with you. It raises the question – do we make time for the people that are important in our lives? Matthew wrote “But life changes. Or if it doesn’t, it gets boring”. I wish this change was not one I must deal with.

From Simon and Jilly Lester

Our brother Matthew died suddenly and unexpectedly on Monday 12 March. As recently as 4 days prior he had delivered one of his inimitable post-Budget lectures to a standing room only audience in Johannesburg. As usual his charisma and larger-than-life presence were on unbridled display, belying grave ill health. His death leaves us all bereft as Matthew was undoubtedly an irreplaceable font of colour in our lives.

It was Matthew’s unequivocal wish that no fuss should be made upon his death. He gave very clear instructions that there should be no ‘event’ to mark his passing, bar for a trip out to sea by those closest to him to commit his ashes to the deep waters of “Die Gang” off Kenton-on-Sea. So despite our collective inclination to (in Matt’s favourite words) “give it horns” in celebration of his life, we will be honouring his wishes and ask that you raise your glass in your own quiet moment in simple remembrance of the quirky, clever, enigmatic, talented, unusual, funny, unpredictable, kind, generous, crazy  man who was Matt.

Despite the brilliant intricacies of Matthew’s mind and the complexities of his life he was at the end of the day a simple chap who loved nothing more than catching fish and a really good laugh. Indeed his lifelong passion for both will forever populate the majority of the many wonderful memories of Matthew that we will treasure forever. His ability to verbalize the ridiculous in any situation could at times be withering, but no one could deny that he was profoundly astute and often brilliantly entertaining. His ability to combine his humor, his knowledge, his command of the English language and his intellect to connect with his various audiences, both formally and informally, was renowned and he carried forward our parents’ legacies as remarkable teachers to generations of pupils with distinction.

In his private life, Matt was just that. He kept to himself and the handful of those whom he allowed close to him, and devoted himself to generations of massive Great Danes and garrulous Bull Terriers with whom he maintained an otherworldly connection. Many will recall his huge frame walking the empty beaches around Kenton and Boknes with his beloved family of dogs, happy with their company in a place he loved dearly. Matthew adored Kenton and the Eastern Cape from the earliest days of his childhood, unceasingly watching the river for shoals of mullet, and the sea for a signal that he could take his boat out and go fishing. He never really settled anywhere else and remained stoically committed to our grandfather Boet van der Riet’s property at Kenton through thick and thin.

It is of profound significance that Matt seemed to have finally found a sense of peace and resolution in his life, ironically just as he was taken from us. After recent years of disillusionment with his beloved South Africa he had taken up his pen again to write optimistically of a sense of imminent change for the better. His private communications with both of us were redolent of someone who had put the turbulence of the past behind him and was content, if a little bored. Matthew’s mind never rested, and for that we have no regret.

The outpouring of sympathy and admiration for Matthew received from across the world over the past week has touched us deeply and we and Jessica are enormously grateful to everyone who has expressed their kind condolences at this terribly sad time. Matt didn’t know how many people knew of him, followed his writing and teaching, liked him or were touched by him in one way or another. It is clear that Matt misunderstood people as much as he was often misunderstood by others. He would not have believed it as he was in reality a shy and introverted person, but he would have been quietly pleased and indeed greatly moved.

And our parents would have been so proud, as we are too.

Matt leaves his partner Erna, his daughter Jessica and his 2 grandsons, Reece and Liam, to each of whom he was devoted.

Rest in peace, Toot. We will miss you forever.