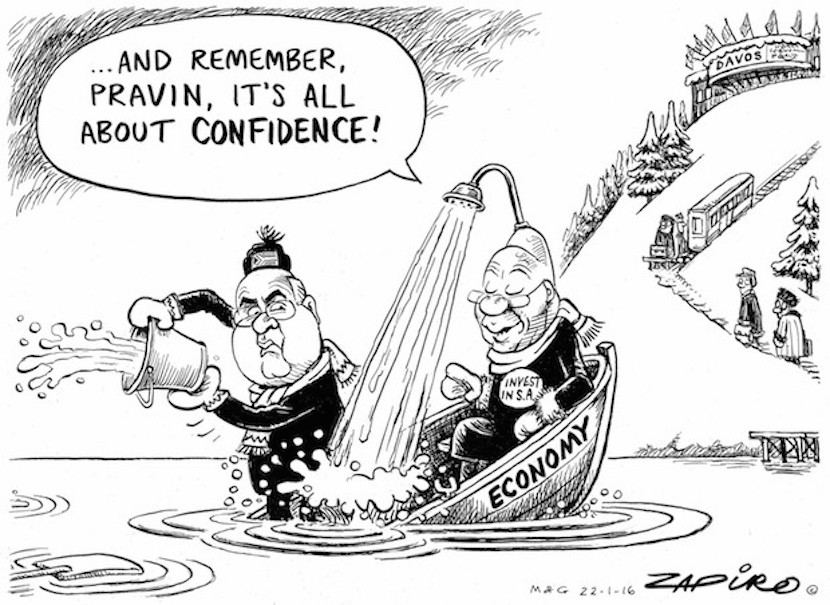 Looking from the outside in, the success of the World Economic Forum from a South African vantage point, was mixed. Yes, we saw positive movements on the billion dollar nuclear project and Finance Minister Pravin Gordhan offered some hope in a presser with the Forum’s Oliver Cann but it was also blighted. The missed debate was opportunity gone for South African, as our voice was not represented. And it’s hard to gauge how the international press received South Africa given the negative news piece on President Zuma in one of the local papers. A detailed brief must be delivered to tax payers on what was spent and what in fact was gained, new projects not those already in process. Below is the Presidency’s statement on how the trip went. – Stuart Lowman

Statement issued by the Presidency

President Zuma, led a high powered Team South Africa delegation and delivered the message that South Africa is open for business to global investors and other stakeholders.

Team South Africa leveraged the presence of international business, analysts and politicians in Davos to assure the global community of the country’s commitment to maintaining policy certainty, fiscal discipline, macro-economic stability and the promotion of inclusive growth and development.

South Africa reiterated that the National Development Plan, the 9 point plan for economic recovery and Operation Phakisa were being implemented with a view to ensuring economic and social growth and development. The current global economic challenges requires South Africa to develop a robust and responsive set of measures to ensure economic stability. The message was advocated by Team South Africa consistently to delegates in Davos.

During the Forum, Team South Africa had high level interactions including bilateral discussions. President Zuma hosted global investors during a session of the Business Interaction Group on South Africa. During this session President Zuma emphasised South Africa’s commitment to policy certainty by announcing the establishment of the Inter-Ministerial Committee on Investments and a one-stop interdepartmental clearing house to facilitate support for investors.

With particular reference to the theme of Davos 2016, Mastering the 4th Industrial Revolution, Team South Africa emphasised the need to create a balance between the use of technology to mechanise and industrialise to move the economy into a knowledge state of human development and job security.

The overwhelming sentiment emanating from Davos was that investors continue to see South Africa as a preferred investment destination. In addition, many countries around the world are faced with similar challenges of slowing economic growth, falling commodity and oil prices. Davos 2016 presented Team South Africa with an opportunity to discuss these challenges, global responses and best practices.

Speaking to the media, the Minister of Finance said that “There was very positive sentiments expressed towards South Africa and the international community continued to see South Africa as a preferred destination. The fact the multinationals – amongst others, Mercedes Benz, BMW, Johnston and Johnston, Marriot Hotels – continue to invest in the country is indicative of this positive sentiment.”  In the last week, ICICI Bank of India announced it would establish an office in South Africa.

Minister Davies said that “We’re telling investors that – despite our country’s enormous challenges, many due to global shocks – we are resilient.”  It is also significant that according to the Oxford Business Group “foreign investors are often less pessimistic about South Africa than many South African companies are.”

Meanwhile the South African delegation remains cognisant of the challenges imposed by industrialisation on development economies. In this regard, Minister Patel observed that “the 4th Industrial Revolution is challenging our world on how we do things. We now have an opportunity to bring health care services to the people, (especially) rural communities using the internet. It also presents us with an opportunity for children to access education in a modernised way.”

While communicating that South Africa is open for business, Team South Africa also acknowledged the challenging times in which the country finds itself.

In this regard, the Governor of the Reserve Bank Mr Kganyago, speaking to the media in Davos, “As far as South Africa is concerned, our pillars remain our strong macro-economic foundations and a solid monetary policy framework.”

The CEO of the Johannesburg Stock Exchange, Ms Nicky Newton-King pointed out that, “we have to understand that there is the new normal which is the slow growth, highly volatile and uncertain global world.  South Africa competes in that global world and we are connected from a financial market perspective.”

Mr Vassi Naidoo, Nedbank Group Chairman drew on the best that WEF has to offer by saying that, “we are here to network and help bring the relevant thinking from the global world on areas such as business leadership, social entrepreneurs for Nedbank and for South Africa,” however, “the reality is we are in a very difficult time from [the] drop in commodity prices, oil prices.”

The Chairperson of the Industrial Development Corporation, Ms Busi Mabuza summed up the challenges of the 4th Industrial Revolution saying, it “is the convergence of technology and creativity of people. We need young population that is skilled, knowledgeable to use telecommunication and medical technology for the betterment of the people. Our networks for telecommunications should be robust enough to support the implementation of the 4th industrial revolution.”

“As Team South Africa departs from snow covered Davos, the challenges of the global economic environment coupled with domestic growth imperatives are top of mind. What remains undisputed is that with all sectors working together, South Africa can move forward. The brand of our country depends of all sectors playing their part for our common developmental agenda. This means business, government and labour must keep interacting and talking to ensure that we move together towards inclusive growth and prosperity for our country. We must build on the WEF 2016 success by cementing unity in action and stronger partnerships for the good of our country and its people,’’ said President Zuma.

Team South Africa went to Davos against the background of investor confidence that has been demonstrated by many international companies that have increased their investments and expanded their South African operations.

Government welcomes the following main investments among others: