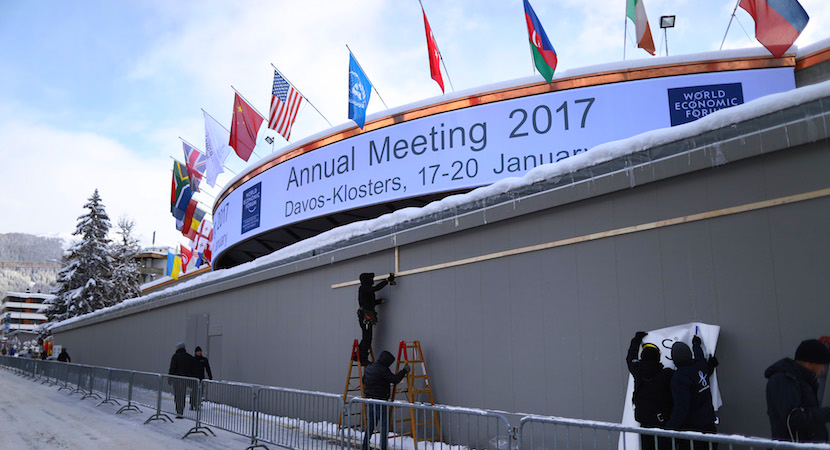 President Zuma, it seems is determined to be consistent when it comes to unexplained cancellations or ‘no-shows’ at vital global diplomatic and investment forums, ranging from his “Annus In-Absentia-Horribilis,” in 2014 to last year’s woeful showing at Davos. While the man everyone at the Davos World Economic Forum wants to meet, politically-embattled Finance Minister, Pravin Gordhan, remains at daggers-drawn with the Zupta-faction, the President’s absence will leave a vacuum ripe for rumour and innuendo. With no President’s Office explanation given, he’s sent his deputy, Cyril Ramaphosa – something he could hardly avoid, given his growing pariah-like international status – nor could he publicly state the real reason (the party advising him to stay home?). Previously we’ve have excuses for either his total non-attendance or missing a vital Africa-focussed session at Davos. In 2014 Zuma cited a “diary clash”, (which later turned out to be the wedding of Robert Mugabe’s daughter) for not showing up. That same year he skipped Queen Elizabeth’s thanksgiving service for Nelson Mandela – after it was postponed to accommodate his schedule. Seven months later in 2014, he arbitrarily pulled out of the Third Annual BRICS Conference in London. Former SA Ambassador to the UK, Dr Dennis Worrall, (1984-1987), at the time fumed about the huge cost to diplomacy in a column which Biznews carried. Ramaphosa and Gordhan’s presence at Davos from tomorrow is by far the best for us all. The theme is after all, “Responsive and Responsible Leadership.” We’ve already had Gordhan talking about ethical leadership and presidential-aspirant, Ramaphosa making local, thinly-veiled allusions to the rot at the leadership core. Zuma is the antithesis of the Davos theme – you don’t sport the albatross around your neck on such occasions – the lack of excuses notwithstanding. – Chris Bateman

Statement from the Presidency

This year, over 2 700 leaders in the public and private sectors will meet under the theme Responsive and Responsible Leadership”.

WEF Davos 2017 takes place in a challenging global environment for both governments and business in which global events in 2016 have highlighted that the more complex a system, the greater a community’s concern about its future.

South Africa will once again use the opportunity to market the country as being open for business and partnerships for development in various sessions and interactions with global business. Team South Africa includes Ministers, a large business delegation and representatives of labour, taking forward the spirit of cooperation to promote inclusive growth.

From government, Deputy President Ramaphosa will be accompanied by the Minister of Finance, Mr Pravin Gordhan; Minister in the Presidency for Planning, Monitoring and Evaluation, Mr Jeff Radebe; Minister of Trade and Industry, Dr Rob Davies; Minister of Economic Development, Mr Ebrahim Patel; Minister of Water and Sanitation, Ms Nomvula Mokonyane and KwaZulu-Natal MEC for Economic Development, Tourism and Environmental Affairs, Mr Sihle Zikalala. South Africa will host the WEF Africa meeting in Durban in May this year.

Organised under the theme Responsive and Responsible Leadership, this year’s World Economic Forum taking place against the background of a challenging global environment is expected to attract over 2700 world leaders in the public and private sectors to discuss the global economy.

The programme for the 2017 World Economic Forum annual event has been organised around five areas which have been identified as in need of urgent responsive and responsible leadership namely: Preparing for the fourth industrial revolution; Strengthening systems for global collaboration; Revitalising the global economy; Reforming market capitalism and addressing identity through positive narratives.

The South African Team under the leadership of Deputy President Ramaphosa will communicate to the global community the positive message that ‘’Working together our future is in our hands’’. In this context the South African team will utilise the opportunity presented by the World Economic Forum to highlight the work that the government working together with business and labour is doing to:

During the proceedings of the World Economic Forum, Deputy President Ramaphosa is expected to participate in five sessions including: Building a new water economy; operationalising the sustainable Development Goals-unlocking the power of public-private co-operation; Africa’s Road to Prosperity; Gathering of World Economic Leaders on Responsive and Responsible leadership in a multi-polar world; African Regional Strategy Group; High-level panel on water; Global Goals-the road to 2030.

The Deputy President will also participate in Business Interaction Group on South Africa aimed at deepening the process of interaction between South African policy-makers and leading multinational businesses from the perspective of advancing national growth and well being. Panelists for this session will include Ministers Rob Davies, Pravin Gordhan, Ebrahim Patel and Jeff Radebe.

South Africa is poised to host in May this year the WEF Africa meeting in Durban.