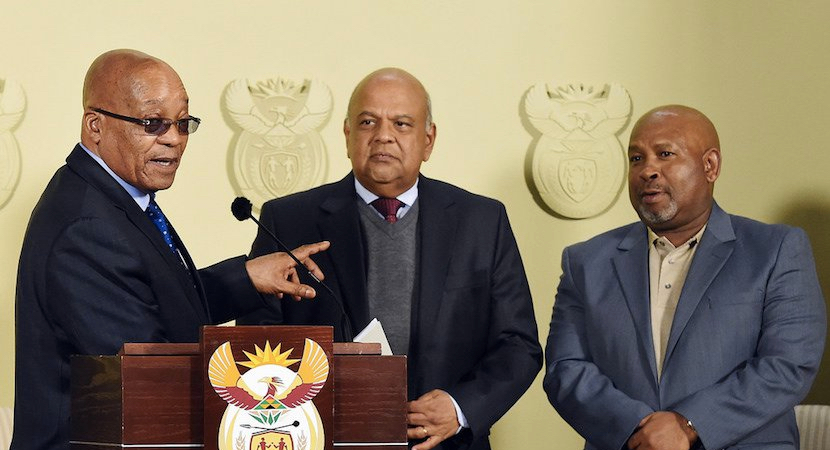 The optimism around South Africa that was created at this year’s World Economic Forum in Davos, has been reversed when one fast forward’s to the World Economic Forum on Africa, currently on the go in Durban. And while state capture, management of state-owned companies, and regulatory stumbling blocks are concerns business leaders faced then and now, the removal of Finance Minister Pravin Gordhan and slide to junk status, is what has broken the thin line of trust between government and business. That is according to Telkom chairman Jabu Mabuza, one of the leaders of the Business Leaders initiative, speaking on the sidelines of the forum. So much was done to rebuild this tender relationship and one wonders if this trust will ever be regained, especially given the various nefarious reasons President Jacob Zuma has given for his late night cabinet reshuffle. – Stuart Lowman

“We had a private dinner with the president and we raised lots of issues,” Mabuza, who is one of the leaders of the so-called CEO Initiative, said in an interview Thursday at the World Economic Forum on Africa in Durban, the eastern port city. “We raised our concern that our working together, the trust, has been destroyed by the developments of the last few weeks.”

Zuma ordered Pravin Gordhan, who was with business and labor leaders in London to meet investors on March 27, to return home and dismissed him four days later, prompting the rand to plunge. Since being reappointed in December 2015, Gordhan led efforts to retain the nation’s investment-grade credit rating, meeting regularly with business and labor-union leaders and foreign investors. S&P Global Ratings and Fitch Ratings Ltd. cut their assessment of South Africa’s debt to junk after Gordhan was removed.

The North Gauteng High Court in Pretoria ordered Zuma on Thursday to explain why he made the changes to his cabinet.

A day after the April 28 meeting with business leaders, Zuma’s office announced that he signed the Fica bill, aimed at fighting tax evasion and money laundering. The law will make it easier to monitor the financial activities of politically connected individuals.

The president pledged to meet with business leaders after he returns from the WEF gathering to respond to some of the other concerns that were raised, Mabuza said, without being more specific about the date.