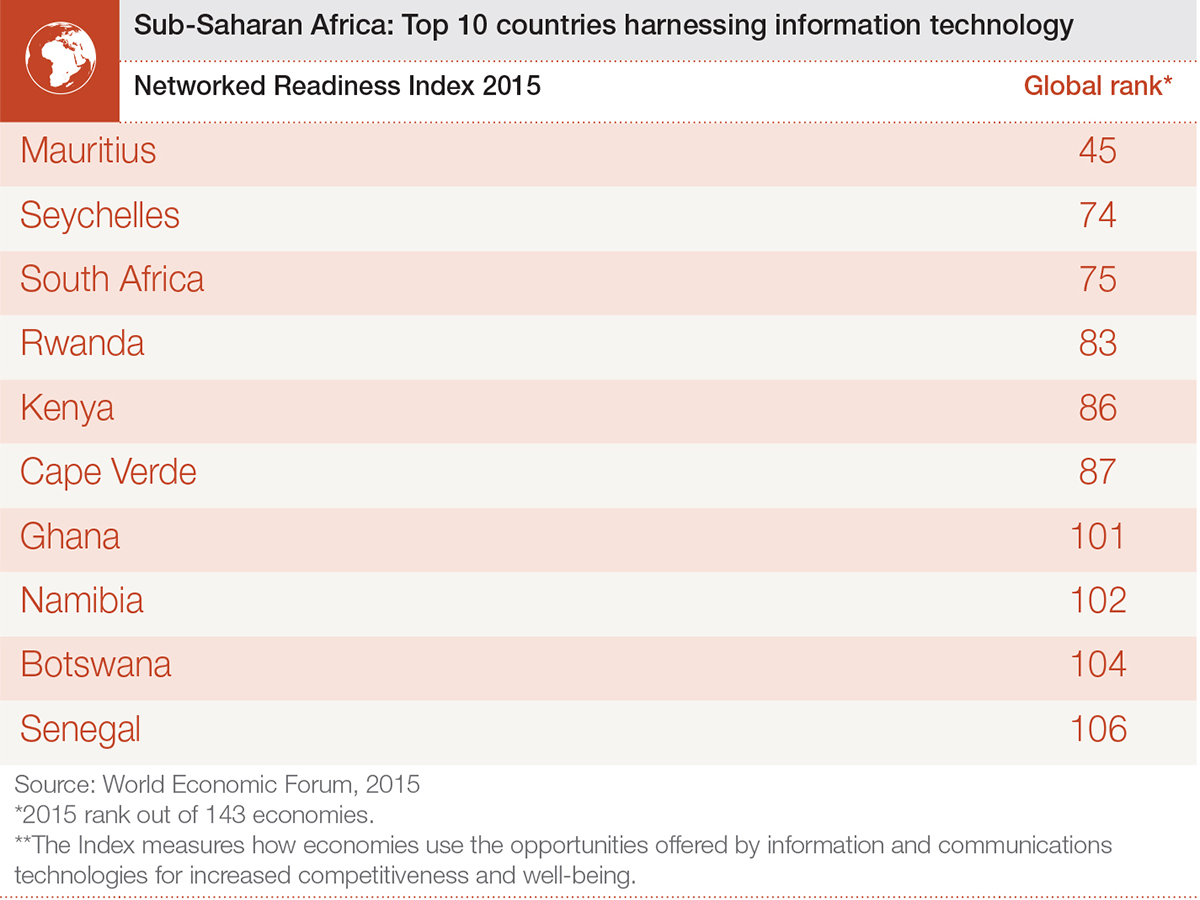 Every year the World Economic Forum produces a raft of benchmarking reports, intended to encourage countries to compare and improve. The first of these for 2015, on Global IT, is released this morning. It measures how countries are performing in leveraging information and ICT for social and economic impact. Of the 143 countries compared, only one country from sub-Saharan Africa, Mauritius (45) is in the top half. South Africa has dropped to third in Africa, one place behind Seychelles and down five spots in all at 75th. The WEF’s analysis shows SA to have a a good regulatory and business climate, but its ICT is hampered by low levels of affordability (123rd on competition); bandwidth availability (128th); low focus by Government  (113th); and internet access in schools (117th). If further evidence for the unsuitability of the ANC’s Developmental State were required, here it is.  – Alec Hogg

From the World Economic Forum:

The world’s developing and emerging economies are failing to exploit the potential of information and communications technologies (ICTs) to drive social and economic transformation and catch up with more advanced nations, according to the World Economic Forum’s Global Information Technology Report 2015, published today. Data from the report’s Networked Readiness Index (NRI), which measures 143 economies in terms of their capacity to prepare for, use and leverage ICTs, suggest that the gap between the best and worst performing economies is widening.

Those in the top 10% have seen twice the level of improvement since 2012 as those in the bottom 10%. This demonstrates the scale of the challenge facing developing and emerging nations as they seek to develop the infrastructure, institutions and skills needed to reap the full benefits of ICTs, as only 39% of the global population enjoys access to the internet despite the fact that more than half now owns a mobile phone.

The 2015 edition of the NRI ranks Singapore as the top country in the world when it comes to leveraging ICTs for social and economic impact. The city state replaces Finland, which had been number one since 2013, and is joined in the top 10 by one other Asian nation, Japan, which climbs an impressive six places year-on-year to 10th position. Occupying the third slot behind Finland is Sweden. The highest-placed G7 economy is the United States (7th), followed by the United Kingdom (8th). Germany, the world’s fourth-largest economy, ranks 13th, down one place on last year.

Progress by the world’s larger emerging markets towards networked readiness has been largely disappointing.

The Russian Federation is the highest-placed BRICS nation, climbing nine places in 2015 to 41st. It is joined in the top half of the ranking by China, which remains at 62. All other members of the group have declined, with South Africa coming next (75th, down five), followed by Brazil (84th, down 15) and India (89th, down six).

“The example of the BRICS is not unique: many other countries that have improved their NRI ranking over the last decade or so are now facing stagnation or regression. This is partly down to persisting divides within countries between rural and urban areas and across income groups, which is resulting in large portions of the population being left out of the digital economy,’’ said Bruno Lanvin, Executive Director of INSEAD’s European Competitiveness Initiative (IECI) and Global Indices projects and co-editor of the report.

“The report shows that the digital divide across nations is increasing and this is of great concern, given the relentless pace of technological development. Less developed nations risk being left further behind and concrete actions are needed urgently to address this,” said Soumitra Dutta, Anne and Elmer Lindseth Dean at the Samuel Curtis Johnson Graduate School of Management at Cornell University and co-editor of the report.

With high-income economies predictably occupying the top 30 places, the report does identify a number of countries that have made considerable improvements, both in terms of their index score and ranking.

Among those punching above their weight are Armenia (58th) and Georgia (60th), which are among the most improved nations since 2012. Outside of the Caucasus, the UAE (23rd), El Salvador (80th), Macedonia FYR (47th), Mauritius (45th) and Latvia (33rd) all improved markedly during the same period.

Early-stage improvements are being witnessed in some of the world’s most fragile and least developed countries as well. Burkina Faso, Cape Verde, Kenya, Lesotho, Madagascar, Mauritius, Nigeria, Tanzania and Uganda have all fully liberalized their ICT markets, while Kenya and Tanzania are beginning to see the benefits of similar reforms.

“Mobile telephones may be becoming ubiquitous around the world, but the ICT revolution will not be carried over voice or SMS. Without better access to affordable internet, a huge proportion of the global population will continue to live in digital poverty, missing out on the enormous social and economic benefits that the ICTs represent,” said Thierry Geiger, Senior Economist, World Economic Forum and co-editor of the report.

With the report confirming the extremely high correlation between ICT adoption by individuals, businesses and government, and the capacity to generate economic and societal impact, it also notes that government leadership in the creation of a good regulatory and business environment with competitive ICT markets is a fundamental requirement for all countries. “Broadband is an income multiplier,” says Dr Robert Pepper, Vice President of Global Technology Policy, Cisco.

“To ensure that ICT benefits everyone, broadband adoption needs to increase overall, but especially for low income populations. Unconnected countries and people are being left behind.”

But while government action is necessary to address digital divides, efforts must also be made to encourage people to participate in the digital economy, argues Bahjat El-Darwiche, Partner, Strategy&, and leader of the firm’s Communications, Media and Technology practice in the Middle East. “Emerging markets need to ensure a sustainable supply of local and relevant digital content if they are to give more people reasons to go online. This requires coordinated action among the major players who have a significant role in the development of the digital ecosystem: governments, brands, operators and content developers. More and better local content will help to provide jobs and higher incomes to millions of people in emerging markets.”

The report is the result of a partnership between the World Economic Forum, INSEAD and the Samuel Curtis Johnson Graduate School of Management at Cornell University. It benefits from the valuable support of Cisco and Strategy&. 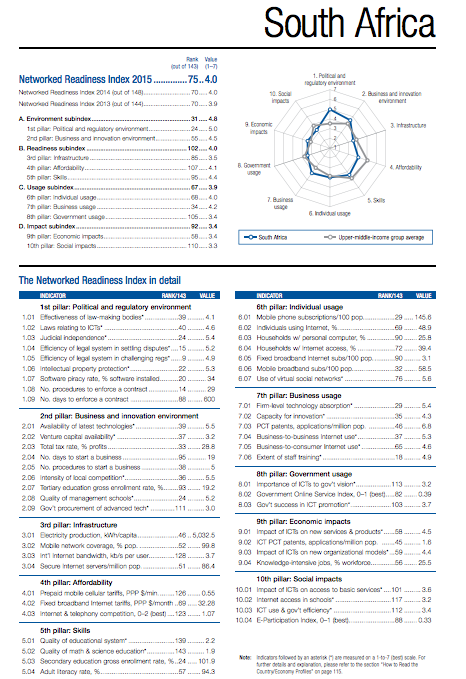