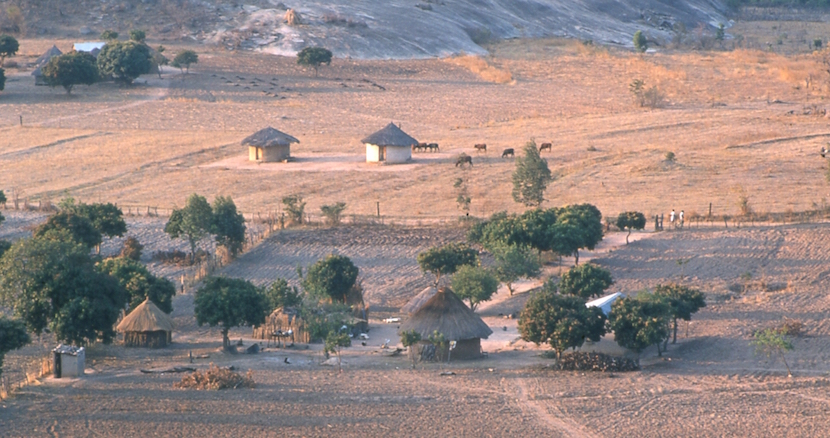 The news broke last week and it did leave a few people perplexed, Cathy Buckle included. It stated that Zimbabwe’s new black farmers will soon have to pay rent for the once white-owned farmhouses they were given under President Robert Mugabe’s land reform programme. She’s not buying it and on closer inspection she finds the contradiction, the same people paying rents and levies into the Land Compensation Fund are apparently also going to get assistance out of the Fund to ‘enhance productivity.’ Surely one cancels out the other? Buckle wonders who gets dibs on any money that comes into that Fund, the dispossessed farmer or the farm beneficiaries in order to enhance productivity? And it’s a sensitive subject for Cathy as her family had their farm taken away 16 years ago. – Stuart Lowman

Driving past the big Acacia trees where the vervet monkeys always used to play, I feel the knot in my stomach tightening. It’s a beautiful day: warm blue sky, pink and white Cosmos flowers along the roadsides and the grass is tall and golden but already I don’t want to see what I know I’m going to see. I’m going to drive past my farm; the farm that was seized by the Zimbabwe government sixteen years ago and for which not a single dollar of compensation has yet been paid. The reason for my drive-by of our farm this week was to see the state of our seized property because the Zimbabwe government have just announced the establishment of a Land Compensation Fund.

According to the memorandum presented this week to members of Parliament, the purpose of the Land Compensation Fund is to: “provide resources for the payment of compensation to former farm owners whose farms were acquired by the State under the Land Reform Programme and to enhance productivity on allocated land.”

Despite sensational international media headlines you need to read the document carefully!

Expenditure from the fund is to pay compensation for land and improvements to indigenous farmers and those with foreign investment agreements (BIPPAS); to pay for improvements only in the case of all other dispossessed farmers and to pay for farm equipment that was seized. Expenditure from the Fund is also specified as being for the Ministry of Lands to carry out farm inspections, undertake valuations and for various other administrative and operational costs (including the never ending computers, vehicles and other items). The Land Compensation Fund will also be used to assist beneficiaries of seized land to “enhance productivity.”

Income for the Fund is apparently going to come from rentals and leases paid by the new occupants of seized farms as well as from ‘development partners’ and donors.

The new Land Compensation Fund all sounds very grand, but wait, look a bit closer. We are a country that is completely broke and has just declared a national disaster, appealing to the world for one a half billion US dollars of emergency food aid and other assistance. For the last fifteen years the 200,000 plus beneficiaries of seized land have turned us into a food insecure country; leaving us nett importers of 80% of our food. These same 200,000 plus people aren’t even able to provide their own seed and fertilizer to grow their crops, continually needing inputs from the government. How then will these same people be able to pay the rents and leases which are apparently to provide the income stream into the Land Compensation Fund? Then there’s the peculiar contradiction in the Compensation document because the same people paying rents and levies into the Land Compensation Fund are apparently also going to get assistance out of the Fund to ‘enhance productivity.’ Doesn’t one cancel out the other? Who, we wonder will get first dibs on any money that comes into the Fund: the dispossessed farmers who’ve been waiting 16 years or the beneficiaries of the seized farms to enhance their productivity?

For a Zimbabwean born but non-indigenous farmer like me I have to pin all my hopes on the ‘improvements’ on my seized farm because I am apparently not entitled to be compensated for the land itself because of my skin colour; this despite the fact that the farm was purchased ten years after Independence with the approval of the Zimbabwe government. But I’m worried, very worried, because according to the Land Compensation Fund memo to Parliament it is the same Zanu PF government who seized our farms 16 years ago who are now going to value our farms and the improvements on them. By any stretch of the imagination how can that be considered to be fair and impartial? Why would any ‘development partner’ or donor agree to that?

And so, with all this swirling in my mind I went to have a look at the state of the ‘improvements’ on the farm that was seized from us back in 2000. I can only look from the road; the grass is tall and I can only see a fraction of the improvements that were left on the farm sixteen years ago. I can see that houses have been demolished; I can see that infrastructure has gone: I can see four kilometers of boundary fencing along the main roads has gone; I can see the roof, doors and fencing around the tobacco barns are gone; I can see water storage tanks have gone. What else lies beyond the tall grass? I can hardly bear to think of it and am overcome by sadness. Why such destruction?

What will the government valuators find? What is left for them to value sixteen years later? More to the point, unless this whole issue is handled by a completely independent, impartial body how will it ever put an end to the mayhem on the land that continues to cripple our country, drive away investors and leave us importing 80% of our food. For all the new political parties sprouting like mushrooms in a dark shed, now’s your chance to speak out and insist this is sorted out properly for the future of all Zimbabweans.