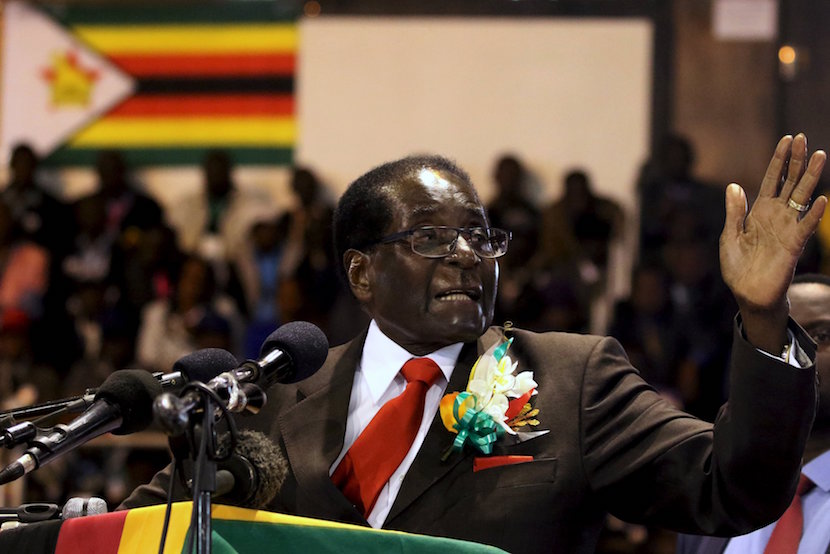 Power corrupts. Absolute power corrupts absolutely. But in the case of Zimbabwean President for Life Robert Mugabe, it also affects proper brain functioning. After 35 years of ruinous rule and massive economic destruction, the 92 year old Mugabe still believes he is the country’s best possible leader. In a 90 minute monologue yesterday, he chided those within his political party who want him dead – the only option for change. “I am not dying, shame on you,” Mugabe told veterans of Zimbabwe’s Independence war that happened 40 years back. They wouldn’t have bothered correcting him. Their real interest was to get their absent minded leader to raise monthly grants to US$260 – a thorny issue given the country is bankrupt and is renegotiating yet another foreign loan that only the most delusional lender would expect to be repaid. When South Africans feel hard done by, one way to cheer up is simply glancing to the north. It’s a living reminder of the danger of allowing the Big Man of Africa syndrome to take hold. Zimbabwe shows us what happens when democracy fails. – Alec Hogg

Africa’s oldest leader at 92 years, Mugabe has held power since independence from Britain in 1980 and says his heir must be chosen democratically and that his wife will not automatically inherit the role.

Mugabe told a meeting of about 10,000 veterans of Zimbabwe’s 1970s independence war that his frequent trips to Malaysia and Singapore had fed newspaper reports that he was ill and sometimes dying, stoking succession fights in ZANU-PF.

“You then see a stampede now, they will be saying the president is dying. ‘I am not dying, shame on you’,” Mugabe said during the first ever such meeting with the veterans.

Zimbabwe's President Robert Mugabe has told war veterans that he is prepared to leave office if he is asked to.

Thursday’s meeting came at a time of high tensions in ZANU-PF as party officials position themselves for a post-Mugabe era.

Local media had reported the meeting could split ZANU-PF, especially after Mugabe said last month the veterans had indicated they wanted him to retire.

Instead, veterans pledged their loyalty to Mugabe, but also presented a list of grievances and demands for top positions in government and state-owned firms, diplomatic posts and at least a fifth of all farmland and mining concessions.

The veterans, 30,000 in total, also want their monthly allowances increased from $260. But Mugabe said the government would only meet such demands if it had the resources.

The last time Mugabe caved into demands from veterans was on Nov. 14 1997 when the Zimbabwean dollar crashed by 72 percent after the government announced unbudgeted allowances for veterans. That day became known as ‘Black Friday’.

But without balance of payment support or foreign credit, Zimbabwe cannot afford such demands. It already runs its budget hand-to-mouth, leaving it with no money for infrastructure.

Mugabe has agreed to major reforms, such as compensation for evicted white farmers and a big reduction in public sector wages in a bid to woo back international lenders and to have part of its $8 billion in foreign debt cancelled.

“We have a disease in Zimbabwe where we just want to receive and forget that debts are supposed to be repaid. It’s a very bad culture,” said Mugabe in a monologue that lasted 90 minutes.