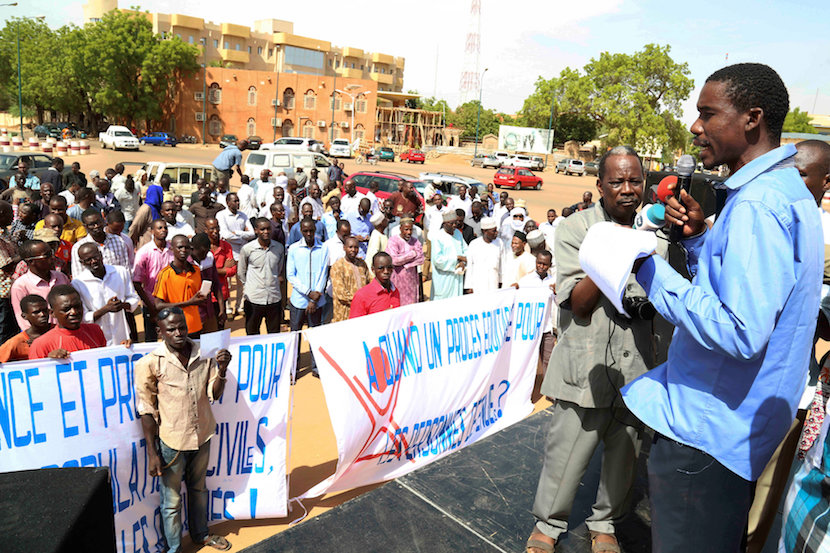 Nigeria is a country of 300 identifiable tribes and almost 600 distinct languages which colonialism consolidated into a single geographic unit. After the honeymoon of gaining independence in 1960, pressures have grown against this artificial construct – witness the Biafran War in the late 1960s and succession of brutal military dictatorships which followed. But since the 1998 murder of perhaps the worst of them, Sani Abacha, Africa’s most populous country has pursued a democratic path. Economic stresses created by a collapsing oil price have exposed deep cracks papered over during the recent good times. Quite apart from the well publicised claims by Boko Haram, other minorities are now using force to publicise their own grievances. This raises questions about whether Nigeria will survive in its current form and if so, at what cost? If not, what might are the implications for business, investment, law and order? It is not only in Europe where serious questions are being asked of the status quo. – Alec Hogg

(Bloomberg) — Just as Nigerian President Muhammadu Buhari appeared to be gaining the upper hand against the Boko Haram Islamist insurgency, more rebellions have exploded across Africa’s most populous nation while the government grapples with the worst economic crisis in decades.

They range from renewed attacks in the southern oil-rich Niger River delta that have cut monthly oil shipments to the lowest in about three decades to attempts to revive the secessionist state of Biafra in the east.

A more than 60 percent decline since June 2014 in the price of oil, the source of two-thirds of state revenue, has hamstrung the government’s ability to deal with the crisis. Buhari, 73, took office a year ago pledging to defeat Boko Haram, end corruption and spur growth in Africa’s biggest economy. It hasn’t gone as planned.

“Dealing with multiple challenges of a complex nature has stretched resources of a state already reeling from a once in a generation economic crisis,” said Antony Goldman, head of London-based PM Consulting that specializes in West Africa’s Gulf of Guinea countries.

While the government has made some progress in weakening Boko Haram in the northeast, the insurgents are still capable of carrying out bombings and kidnappings. And with attacks on oil facilities intensifying, the government has been forced to deploy troops on two fronts.

The Indigenous People of Biafra separatist group, campaigning for an independent state in the southeast, said more than 40 people were killed in the city of Onitsha when security forces fired on protesting members on May 30. The group was marching to mark the anniversary of the failed declaration of independence in 1967 that led to a civil war in which at least a million people died.

Security forces in Onitsha responded in self-defense to attacks that included the use of small arms and “volatile cocktails such as acid and dynamite,” the army said in an e-mailed statement. Five pro-Biafra protesters were killed, eight were injured and nine arrested, it said, denying the figures claimed by the separatist group.

In March, mainly Muslim herdsmen who’re moving south to escape the advancing Sahara Desert attacked the mainly Christian farming town of Agatu with which they’ve had disputes over grazing land, leaving at least 300 people dead, according to the Benue State Emergency Agency. A raid a month later on the southeastern farming community of Nimbo by the ethnic Fulani cattlemen killed another 20 people. Buhari is an ethnic Fulani.

“The Fulanis may get a sense and feel he is part of them, and will even become more confrontational,” said  Clement Nwankwo, executive director of the Policy and Legal Advocacy Centre, based in the capital, Abuja. “Those who are attacked will also think the same and have to find means of protecting themselves.”

Buhari ordered troops to pursue the suspected herders, whom government officials have said are mostly from neighboring countries.

Still another religious crisis erupted after troops responded to the stoning of the army chief’s convoy by members of a Shiite Muslim organization in December with a two-day assault on the group’s buildings in the northern city of Zaria. More than 300 Shi’ites were buried in mass graves and no one has been held accountable, according to Amnesty International. The group’s leader Ibrahim El-Zakzaky and his wife, who were both shot in the attack, remain in detention.

It’s in the delta where Buhari faces potentially the greatest danger because of its importance to power supplies and oil exports. Attacks by militants on oil and gas installations are compounding the nation’s problems. Without gas flowing to power plants, electricity generation has been cut by more than 70 percent, leading to more blackouts.

When the delta was rocked by an even bigger campaign of violence between 2006 and 2009, then President Umaru Musa Yar’Adua subdued the militants by offering them pardons and monthly payments. His successor, Goodluck Jonathan, agreed to pay rebel commanders to protect the oil installations.

Buhari ended all pipeline security contracts and reduced the monthly stipends. In a wave of attacks this month, the militants responded by blowing up key pipelines, pushing oil output to a 27-year low of 1.4 million barrels a day.