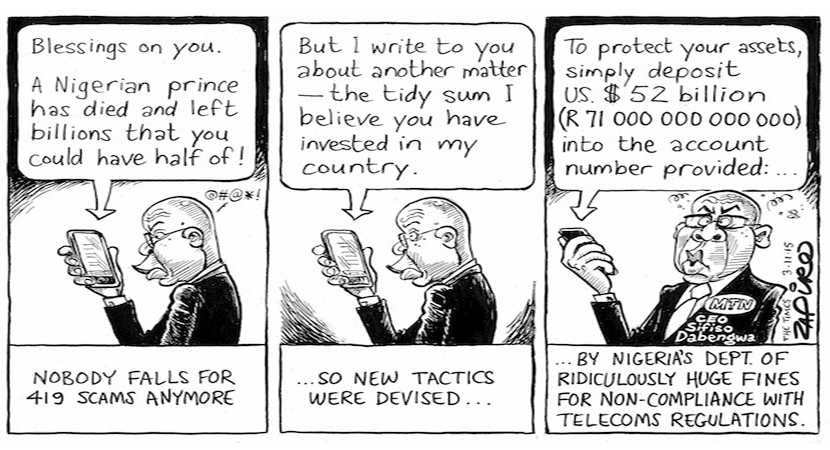 Not for the first time, MTN’s chairman Phuthuma Nhleko has proved his value to Africa’s largest mobile business. In the eight months since taking over as chief executive again, the 56 year old one-time banker has quietly but firmly chipped away at the life-threatening $5.2bn fine imposed by the Government in MTN’s biggest profit geography. Last week’s confirmation of a $1.7bn settlement was warmly applauded by shareholders, with the share price rising over 15%. Further upside is in prospect as MTN’s market cap is still $5.6bn below the pre-fine level. Two lessons from this particular story – doing business in Africa isn’t for sissies. And if you decide to, best to have a world class executive in the hot seat. It’s hard to imagine anyone other than Nhleko extracting so much from the terrible situation. Sometimes a CEO really is worth more than their weight in gold. – Alec Hogg

By Camillus Eboh and Joe Brock

ABUJA, June 13 (Reuters) – South African telecoms group MTN will take immediate steps to list shares in Nigeria as part of a deal to settle a dispute over unregistered SIM cards and will also issue an apology, according to a copy of the agreement seen by Reuters.

The company said on Friday, after months of talks, that it had agreed to pay a heavily reduced fine of $1.7 billion in a settlement with the Nigerian government for failing to deactivate more than 5 million unregistered SIM cards.

Authorities have been cracking down on unregistered cards, concerned they are used for criminal activity in a country battling an insurgency by Islamist militant group Boko Haram.

Nigeria, facing its worst economic crisis for decades, had agreed to cut the fine initially demanded by almost 70 percent after MTN threatened to shut down its operations in the West African nation, a Nigerian official said on Friday.

Under the deal, MTN – Africa’s largest telecoms company – will strengthen its presence in Nigeria by listing its local unit, a plan held up by the prolonged dispute, according to the copy of the agreement obtained by Reuters on Monday.

“MTN undertakes immediate steps to ensure the listing of its shares on the Nigerian Stock Exchange as soon as commercially and legal possible after the date of execution,” the document said.

MTN-dividend not under threat so a year or two BUT big SA capex. So must get cash from Nigeria and Iran over medium term to fund dividend

The South African mobile phone giant will also issue an apology to the Nigerian government and people within one month of the execution of the deal, the agreement said.

The group – which filed a lawsuit against the fine before opting for an out-of-court deal – will also cover its own legal costs, the agreement said.

The fine will be paid by MTN Nigeria over three years and is only around a third of the $5.2 billion figure initially demanded by the country’s communications regulator last October.

However, in a potential obstacle to the settlement, a committee of Nigerian lawmakers said on Monday that it intended to press on with an investigation, launched in March, into the legality of offering MTN a reduced fine.

“We will certainly continue with our investigation,” Saheed Akinade-Fijaba, chairman of the parliamentary communications committee, told Reuters.

“We are disappointed that this agreement was reached without our consultation,” he said. “We need to make sure everyone complied with the law. The law doesn’t say anything about reducing a fine.”

Nigeria’s House of Representatives – the lower house of parliament – was due to question the communications minister and a senior official from the communications regulator on Monday, but the hearing was delayed for one week, lawmakers said.

MTN is the largest mobile phone operator in Nigeria with 62 million subscribers, and the country accounts for about a third of its revenues.

The company has already paid 50 billion naira of the 330 billion naira ($1.7 billion) owed. The rest will be paid in six instalments over three years, the company said. It set aside $600 million in March to pay the fine.