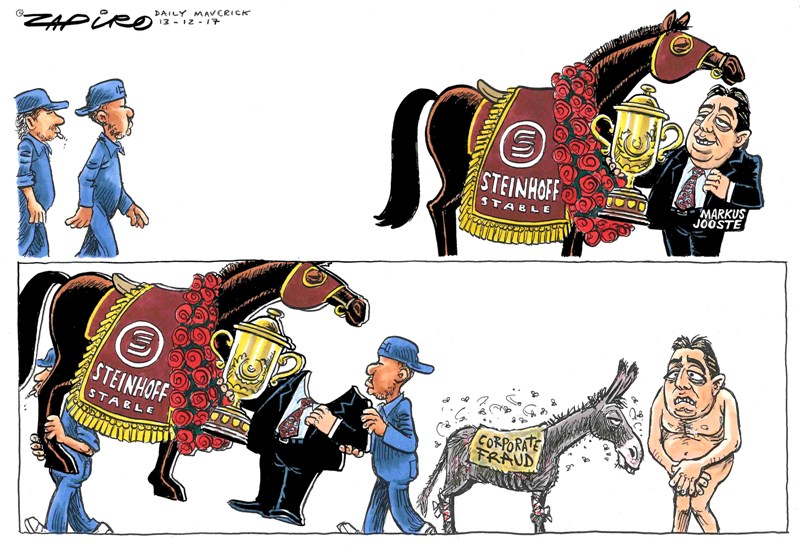 CAPE TOWN — The word is ignominy and it applies to former CEO of Steinhoff International Holdings NV, Markus Jooste in the town where his company’s stamp was everywhere; that bulwark of Afrikaans prestige, Stellenbosch. Jooste’s company was the ubiquitous, all-familiar sponsor of everything from Rugby Sevens to cricket to the town’s world famous local university – not to mention his commercial presence in shopping malls and business centres. Today any sign of Steinhoff in Matie-land is either obliterated or sourly tolerated. The signage on the university campus is either taped over or covered with black cloth, but there’s very little mourning that might benefit such actions. It’s more like shame at having been associated with a scandal-rocked company whose senior executive misappropriation of funds has so far wiped nearly R167 billion off its market value. A multiple Owner of the Year in national horseracing, Jooste’s race it seems, is run. The comments from key figures he once rubbed shoulders with, say it all below. – Chris Bateman

The former CEO of Steinhoff International Holdings NV is at the center of the accounting scandal that’s wiped some $14 billion off the retailer’s market value and roiled the wealthy enclave of Stellenbosch, where many prominent business leaders live, work and play. Jooste would probably have met a chilly reception at Kenilworth Racecourse this year.

“People are cheesed off,” said Heather Steel, 58, as she waited near the grandstand between races last Saturday. “He’s lost a lot of people money, a lot of pensioners too.”

Jooste led an acquisition spree that turned Steinhoff into a global retailing giant, a national champion and a source of pride in Stellenbosch, home to its plush South African headquarters and one of the country’s elite universities. Surrounded by vineyards and the Helderberg and Simonsberg mountains, the town’s oak-lined streets are fringed with restaurants, boutiques and art galleries. Cape Dutch architecture points to the region’s colonial history, as does the widespread use of the Afrikaans language.

Signs of Steinhoff’s presence, once splashed all over town, are diminishing in the wake of the scandal, in some cases almost overnight. The company’s sponsorship of Stellenbosch University sports teams had placed its maroon branding—which matches the school’s colors—on everything from the rugby posts at Danie Craven stadium to the score boards, tickets and athletes’ uniforms. Both Jooste and ex-chairman Christo Wiese are alumni of the university.

Since Steinhoff recently withdrew that sponsorship, athletes have been forced to unstitch its emblem from their jerseys and groundsmen to take down the posters and signs that bore the company’s name. The university is even reprinting tickets to replace those with Steinhoff’s branding. Now, billboards from the rugby field lie in a dusty pile at the back of a shed, past lawn mowers and wooden work benches, while masking tape has been used to cover the company name on the stadium bridges.

Over at the cricket field, a Steinhoff sign was draped in black cloth in a last-minute effort to ensure that first-year students arriving for their official welcome by the rector wouldn’t see the name from the stadium’s seats. With the arrival of students for the start of the academic year, the town’s population of about 160,000 swells by more than 30,000.

Much like every shopping mall in South Africa, the one in Stellenbosch houses Steinhoff-owned outlets such as Pep, Ackermans and Tekkie Town. But in this town, a 45-minute drive from Cape Town, the connection runs deeper.

Now residents are only talking about two topics: Steinhoff, and a crippling drought that’s left vineyards, golf courses and the odd vegetable garden as the only patches of green in an otherwise parched valley. For others, the company’s woes have caused such misery that it’s a forbidden topic of conversation at the regular weekend barbecue.

Johann Rupert, the chairman of Swiss luxury-goods maker Compagnie Financiere Richemont SA and South Africa’s richest person, was born and grew up in Stellenbosch. He doesn’t live in the town anymore, but is chancellor of the university. Through Twitter, he has expressed his irritation with how the Steinhoff scandal has sullied the town’s reputation, all the more so because none of those involved were “born in Stellenbosch or grew up there.” Rupert isn’t the only one who has expressed such feelings.

“I don’t think what has happened at Steinhoff is a true reflection of what the town actually is,” said Rob Barrie, a 63-year old dentist by training who studied at the university and has lived in the area since 1980. “Just because one company may be up to no good, doesn’t mean the whole town is corrupt and rotten.”

Since early December, when Steinhoff made international headlines by announcing the discovery of unspecified accounting irregularities and Jooste quit, the company has been scrambling to raise cash to meet its obligations. Wiese, one of the country’s richest men and still Steinhoff’s biggest shareholder, soon left as well. The stock has dropped 85 percent, leaving some Stellenbosch residents who bought into the hype poorer and disillusioned.

“Steinhoff had a very good name in Stellenbosch,” said Shaun Scheepers, a 37-year-old radiologist who studied at the university and works at a private practice with offices in the town. “But the trust has been eroded.” He owned Steinhoff shares and said he and some friends are joining a class action suit against the company.

Of course, the impact extends beyond the town and its environs. The collapse in Steinhoff’s stock price resulted in billions of rand in losses to the country’s pension funds.

On Saturday, a three-year-old filly bred and owned by Rupert’s family won the main race to take home the 5 million-rand ($420,000) prize. She beat Legal Eagle, which until mid-December was owned by Mayfair Speculators Pty Ltd., the company that Jooste used to manage many of his more than 200 racehorses.

Last week, Lyndon Barends, the CEO of the National Horseracing Association of South Africa, made it clear that Jooste wouldn’t benefit from participating in Saturday’s races, where some of his horses had been scheduled to appear.

“It would be hard for him to show his face again,” Barends said.