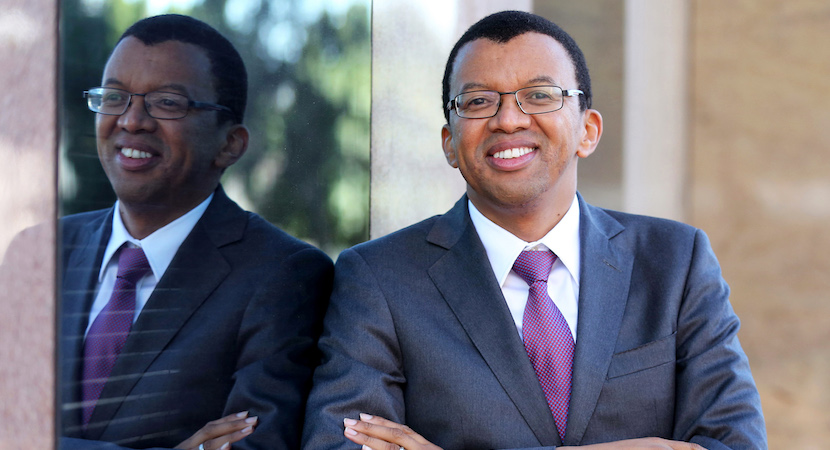 LONDON — If all Black Economic Empowerment schemes delivered as well as Vodacom’s YeboYethu offering, there would be no debate about a philosophy which some feel has been hijacked by elites. Vodacom’s 2008 scheme, which required a minimum investment of R2,500, has delivered for 85,000 black shareholders and 8,500 staff. Their initial investment is now worth almost R16,000 – with roughly half of that about to be distributed by way of a special dividend. The scheme having reached expiry date, RMB’s Kgolo Qwelane has been intimately involved in repackaging YeboYethu Mark Two – and once again shareholders are buying in at the kind of discount that’s sure to deliver handsomely again. Qwelane provides the details in this special podcast. – Alec Hogg

This special podcast is brought to you by RMB. In 2008 Vodacom SA attracted 85,000 new black shareholders in a public offer of shares via the widely publicised YeboYethu transaction. With 8,500 Vodacom staffers also opting into the scheme, this innovative, Black Economic Empowerment (BEE) transaction was one of the largest of its kind and, as it turns out, a hugely successful one for those who invested in it. They’ll be getting back, in cash, a multiple of the original capital that was put in, plus a significant stake that’s now being reinvested in YeboYethu 2. At almost R16.5bn this is the largest single, empowerment transaction in the ICT sector in SA to date. RMB Corporate Finance transactor, Kgolo Qwelane has been intimately involved in this year-long project that drew on experts in various departments at the bank.

The deal started off in 2008 with three components: a strategic partner component (Royal Bafokeng Holdings and Thebe Investment Corporation); the YeboYethu component (essentially the black public component) and the Vodacom employees.

We are talking about big numbers here – 85,000 people who participated in it and 8,500 employees. To manage this number of people must have been quite an administrative issue?

Yes it really was. All of the black public came through via a public offer process. The company ran a very extensive process to issue prospects to bring everyone in. In the same vein, the employees who were there at Vodacom at the time, as well as new ones, who joined further in during the period had to be accommodated.

How well did they do out of their investment?

The maturity of the deal is a very positive and exciting story that will deliver R7.1bn worth of value to all of those VSAB shareholders. A portion of that will come out in the form of a special dividend of R3.3bn, while the remaining R3.8bn will be reinvested into the new deal.

The minimum investment was R2,500 per individual shareholder in 2008. Those shareholders will receive cash of about R7,300 and get to keep their shares, reinvesting approximately R8,600 into the scheme. So is really is a significant cash windfall and unwind event.

Wow, so that’s R16,000 roughly that you would have got back for R2,500. That’s a return on investment that even Warren Buffett would have been very proud to have.

Yes absolutely. Those are very good returns and excellent times when money goes back to the investors.

The point that you’re making as well, is that got their money back, plus a huge profit on it, and they’ve got an investment of R8,600 in the new transaction. These are the people for every R2,500 they originally put in. That in itself must have been quite a complicated exercise.

Indeed. There was a lot of complexity that we had to deal with. Just to highlight some of them – we obviously had to think about how to unwind the current deal and how to implement the new deal. We dealt with multiple stakeholders, Vodacom, the three BEE parties I referred to a bit earlier, RBH, Thebe Investment Corp and YeboYethu. Another point not to miss was the R16.4bn that effectively makes this the largest BEE deal in the ICT sector in South Africa to date. We had to also think about the large funding requirements that was required in order to fund the deal. While the original deal was pitched at a South African level, we also had to migrate it to a group level. That added quite a bit of complexity to deal with, but in the end we came out with quite a unique and very simple solution that achieved all of those objectives.

Without getting bogged down in the detail, because having read through some of it, I can see how easy that would be. Can you unpack it for us in layman’s terms?

Essentially, the new deal is a R16.4bn deal that equates to 6.23% of the Vodacom Group. It’s funded by a combination of third party funding from banks and Vodacom to make up 60% of the funding structure which amounts to R9.9bn.

What do you mean by ‘third party?’

A portion of the funding structure is funded by the banks. As part of the process our Leveraged Finance, Syndication and Distribution teams were appointed as mandated lead arranger in order to raise a bank funding package for the deal. That forms a component of the overall funding structure.

So other South African and international banks would have been involved as well?

Just the South African banks. Vodacom approached a number of the local banks and ran a process. The banks that emerged were Absa, Nedbank and RMB who ultimately formed the joint funders to YeboYethu on the transaction.

So that’s about R10bn of the R16bn. What return are the banks who put in the funding going to get?

The R10bn is split almost half-half between the banks and Vodacom. The bank funding package was priced very competitively at 68% of prime, while the Vodacom funding was priced at 70% of prime. This resulted in a blended funding rate of 69% of prime – making for quite competitive pricing.

Indeed, and the cost of the new shares? Is there any incentive or any benefit for the YeboYethu shareholders there?

Yes, as part of the overall funding structure, there’s the equity reinvestment that amounts to R3.8bn. Vodacom in addition provided an 11.8% discount which amounted to an extra incentive of R1.95bn into the new deal.

Let’s unpack. You’ve done it in the way that I can understand it, but just to make absolutely sure. If you’re a YeboYethu shareholder, you’re getting the benefit of interest rates, which is effectively two thirds of the prime overdraft rate – that’s your funding rate. Plus, you’re getting a discount of nearly 12% on the share price. It looks like you’re starting off from a pretty attractive base.

Yes. When you put it all together, the discounts and the equity reinvestment, including the new employee share option scheme for Vodacom employees, it makes up 40% of the net asset value from day one. So the deal is basically in the money from day one.

YeboYethu is currently listed on the BEE Exchange. As part of the wider transaction, there’ll be additional shares that will be issued to RBH, Thebe Investment Corporation and to this new employee share option scheme. That will all increase the number of issued shares in YeboYethu Ltd. The current listing will remain and shareholders will continue to trade their shares.

Kgolo, just so that nobody gets a fright after that dividend gets paid, if you were to take a person who has 100 of those BEE shares, which are listed on the JSE today. Is the price going to change at all, after this transaction?

So that dividend is R73 a share, effectively if the share price goes down by R73 don’t worry because you’re getting that in cash.

That is correct, yes.

So to get back to that question, the total BEE shareholding now in the Vodacom Group, after this transaction?

So it has a double benefit for Vodacom – on the one hand for staff and 85,000 shareholders on the other hand who came to the party 10 years ago – they are all  going to get a nice dividend pay-out. Plus, they’re going to stay in while the BEE shares expand. It looks like this is one of those transactions that could be applied elsewhere in the SA economy.

Yes absolutely. We think that the end result is really a great outcome for all involved. There are some unique features from this deal in terms of sustainability and how the deals are basically structured that could potentially be replicated.

So where do you start? There’s a lot of moving parts in all of this. When you got the assignment, where do you even begin, given that you were instrumental in putting this whole thing together?

The way we normally approach it from an RMB perspective is that we spend quite a lot of time upfront in sitting down with the client to really understand the objectives to ultimately serve their needs and make sure that their objectives are fully met. We also spend a lot of time in pulling in the right experts from the bank and bringing them onboard.

As I mentioned before we roped in teams from Leveraged Finance, Syndications and Distribution to work on the transaction. All of them brought enormous experience – having worked on similar transactions before. At RMB we also have this mindset of saying, ‘there’s a solution to every problem, rather than a problem to every solution.’ So, in essence, we do try and make sure that even if there is something that does look quite complicated, we do try and get to the bottom of it to figure it out so that we can achieve the right outcome for the client and all involved.

How long did it take you to do all of this?

It took close to a year. One of the things that we were working towards was to ensure that we implemented the solution before the maturity date of the original 2008 deal.

Would you be engaging with Vodacom, obviously, on the one hand, but with RBH and Thebe, being two cornerstone BEE shareholders?

Yes absolutely. We were advisors to Vodacom on this specific deal. But the solution itself would have affected all of those parties. We would obviously have had to engage with them and discuss their views on what the proposed solution was going to be.

How did they react when you put the final proposal on the table?

I think everyone was very excited about what we proposed. There was always the unresolved issue around how the whole deal would unwind, and what would happen to it. Everyone was relieved when they got certainty around how exactly the unwind would work and how they would be able to ultimately end up having shares that are linked to the entire Vodacom Group, rather than just Vodacom SA business.

How will the younger people who missed out 10 years ago participate?

On the BEE Exchange YeboYethu will continue to be listed with the shares freely tradable. They can sign up to acquire shares on the BEE Exchange. There are certain verification procedures that they would have to undergo, and then they will be able to trade and participate in this transaction.

That was Kgolo Qwelane, Corporate Finance transactor from RMB, and this special podcast was brought to you by RMB. I’m Alec Hogg, until the next time, cheerio.