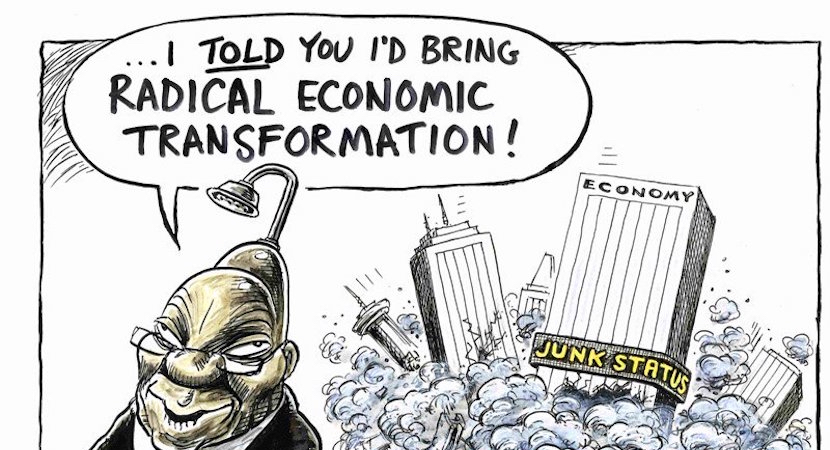 With Zimbabwe’s economic suicide both on SA’s doorstep and seen everywhere in refugees eking out an existence inside the country, you’d expect wise leaders to do everything to avoid the same fate. But wisdom, along with courage, is in short supply among those calling the ANC’s shots right now. Such is the emotion against “white monopoly capital” stirred up by the likes of Gupta-paid London consultancy Bell Pottinger that otherwise sensible individuals are acting most irrationally. Indeed, some in the ANC’s leadership have even swallowed the idiocy that SA should follow its northern neighbour into an economic abyss – because this is the best way to slay the WMC beast. These worthies are celebrating the resignation of Treasury’s Director General Lungisa Fuzile as another step in hastening Zuma’s “radical economic transformation” project. In truth, they are so deeply enslaved to prejudice they are being willingly led by crony capitalists with a greed-driven agenda who have engineered the entire farce. If you thought education was expensive, try ignorance. In another excellent contribution, independent economist Azar Jammine applies his mind to the latest blow to SA’s economy. – Alec Hogg

In the wake of the announcement of a Cabinet reshuffle on Thursday, we expressed alarm at the potential for state capture of the National Treasury, the consequent potential for abandonment of fiscal rectitude and in turn the likely impact which this would have on the country’s credit ratings.

However, we added the encouraging note that Lungisa Fuzile, the Director-General of Treasury, had refrained from tendering his resignation. This was important because it would ensure some element of continuity within the workings of National Treasury and in particular would act as a gatekeeper in preventing the ravages of state capture from having full rein.

Indeed, we even suggested that the depreciation in the Rand was more muted than one might have anticipated in the face of the news at hand precisely because of Fuzile’s apparent decision to remain at Treasury under the new Minister.

It is in this context that we are therefore extremely disturbed by the news that Fuzile has submitted his resignation.

Huge institutional memory to be lost in National Treasury

He has done so magnanimously and has made it quite clear that he has called upon his Treasury team to continue to support the new Minister and Deputy Minister of Finance, Malusi Gigaba and Sfiso Buthelezi respectively.

He has also intimated that he had already expressed his intention to resign prior to the Cabinet reshuffle, in this way trying to defuse political criticism of his abandoning the “Gordhan” Treasury simply because of the departure of its head.

However, we remain concerned about the implications of his departure.

Firstly, he was a seasoned Treasury official who had built up 19 years of experience in the institution, something which is going to be extremely difficult to replicate whosoever follows in his footsteps. His departure entails a massive loss of institutional memory within Treasury especially at a time when both a new Minister and Deputy Minister of Finance, with little direct experience in the institution, have taken over.

Secondly, we fear that his departure might yet be accompanied by a similar string of resignations of other Treasury officials, leaving a void of technical expertise in the organisation. This remains to be seen, but indeed remains a significant possibility.

To this end, a report in Business Day today suggested that Gigaba had brought along 28 officials from the Ministry of Home Affairs to assist him in his task of taking over the Ministry of Finance, but to replace a mere nine officials who had served under Gordhan. If this is true, then it highlights the technical constraints facing the new Treasury team which has required the secondment of so many new faces into the team.

Thirdly, one is alarmed at the possibility of the installation of a new Director-General of Treasury who is aligned to the faction of the ANC supporting the decision by president Zuma to reshuffle Cabinet. This will surely exacerbate the concerns about a full capture of the National Treasury.

People like Lungisa Fuzile remind us there are excellent black role models in a country where some betray blackness at altar of corruption.

There have been initial suggestions that Brian Molefe might be called upon to fill this post. As much as Molefe is experienced at management and has arguably performed reasonably well as CEO of the Public Investment Commission, Transnet and Eskom at various times, he has become stigmatised as having been “captured” by the Zuma interests in laying their hands on the funds at National Treasury. This is extremely disturbing given the stature of the National Treasury as a bastion of stability in the economy and the country.

Confidence vote within the ANC given to Zuma

The resignation of Fuzile coincides with a vote of confidence in President Zuma at the NWC meeting held yesterday. In a media briefing, ANC Secretary-General Gwede Mantashe suggested that the leaders of the party had basically kissed and made up and decided to go ahead with the Cabinet reshuffle notwithstanding the fact that three members of the “top six” of the ANC had expressed their dissatisfaction with the Cabinet reshuffle and the manner in which this was communicated to them.

The initial response of the Rand to this news was negative, once again highlighting how the currency’s fortunes seem to be dependent upon the probability of a resignation by President Zuma from his position, with the concomitant hope of a diminution in the likelihood of state capture.

The NWC vote also comes after substantial mass action on the part of pro-Zuma supporters within the ANC. It highlights the fact that the Cabinet reshuffle and change in the leadership of National Treasury might be representing the climax of the standoff between two diametrically opposing ideologies regarding the direction of South Africa’s economic policy.

The “mixed economy”, half-market oriented and half interventionist approach aligned to the National Development Plan, which has been the cornerstone of the Gordhan tenure of Ministry at the National Treasury, seems like it is being overthrown by a more redistributive and interventionist approach by those anxious to embark upon radical economic transformation, inequality reduction and upliftment of the poor through socialist means. Zuma enjoys much support from the relatively uneducated masses, especially the youth, who wish to overthrow the existing “white capitalist monopoly class”, believing that they can do a better job of improving the likelihood of the poorer sections of the community.

The belief of these “have-nots” is that state capture of the National Treasury will ensure redeployment of funding towards projects which help the Black community away from assistance to big, primarily White owned, business. What is not fully appreciated is that it is difficult to just switch on the implementation of ambitious projects without a comprehensive technical and administrative capability, which currently resides within big business.

Unfortunately, those with knowledge of business will understand that the new incumbents in National Treasury are in for a big surprise in terms of the challenges faced in undertaking large-scale infrastructural and other social projects. Furthermore, the constraint of doing so within the ambit of fiscal consolidation is likely to prove virtually impossible.

There are therefore two possible scenarios.

Firstly, implementation of radical economic transformation might fail because of a lack of expertise to implement such a programme. The result will be even lower economic growth than what the economy has been experiencing.

Alternatively, the relative success in radical economic transformation is likely to be accompanied by a transgression of fiscal constraints.

Either way, the probability of further credit ratings downgrades and disappointment with the outcome of attempts at radical economic transformation, will intensify. Blame for lack of transformation will then be redirected away from Treasury to other areas of the economy, which might result in still more unsavoury intervention in the conduct of private sector business.

Unfortunately, attempts at persuading Zuma supporters of the importance of education and skills development to bring about transformation tends to fall on deaf ears. Many within the ANC recognise the futility of recent attempts at bringing about transformation through the Cabinet reshuffle, but the political system does not seem to allow them to find practical expression in political outcomes.