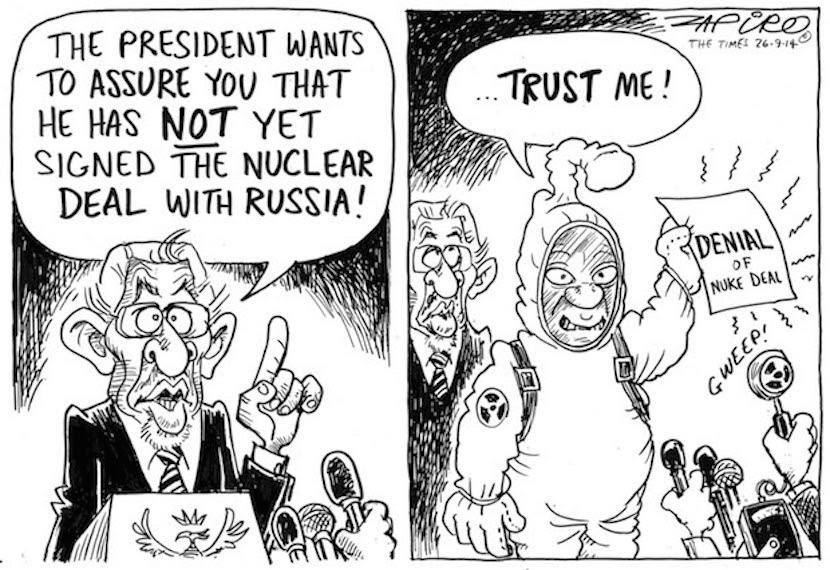 The nuclear power build has been widely regarded as the main prize by many watching the state capture strategy unfold in South Africa. This week, the project was dealt a major blow when a court ruled in favour of civic groups that have been working hard at stopping the government from rolling out a costly programme that could easily cripple the country’s finances. The project is believed to be linked to a cabinet overhaul which preceded credit ratings downgrades. Emerging markets economist Peter Attard Montalto of London-based Nomura says it is doubtful whether this court ruling will derail a Moody’s ratings cut. Montalto doesn’t believe the nuclear issue is ‘dead’. – Jackie Cameron

Cape Town – It is doubtful whether Wednesday’s nuclear court decision would derail a ratings cut from Moody’s, according to emerging markets economist Peter Attard Montalto of Nomura.

It does put more focus on an S&P local ratings cut this year, though, given the growth shock Nomura expects, that should happen eventually anyway, in his view.

Therefore, the wide-ranging high court judgment – basically throwing out SA’s entire nuclear procurement process, including intergovernmental agreements – can be seen as a marginal positive for ratings and the market, he said.

Montalto added that this marginal positive for ratings will, however, be within a set of larger negative factors and shocks.

Judge Lee Bozalek ruled in favour of the applicants against government.

In his ruling, he declared unlawful government’s attempts to secure 9.6 GW of nuclear energy, including the initial determination to procure nuclear energy in 2013, the cooperation agreements signed with Russia, the US and South Korea, as well as former energy minister Tina Joemat-Pettersson’s decision to hand over the procurement of nuclear energy to Eskom late last year.

“While an appeal is likely, if unsuccessful the government is back to square one. A winding road still exists from here towards nuclear power, which we expect the government and Eskom, under significant pressure, to try to navigate,” said Montalto.

Montalto expects the SA government to appeal Wednesday’s decision, because – in his view – “the Zuma faction” is under pressure to show progress on nuclear procurement.

“We think it was a key contributing factor to Nenegate and the recent reshuffle,” said Montalto.

Montalto cautioned that the nuclear issue cannot be dead here. The stakes politically and geopolitically for the government, and specifically for Zuma, are simply too high, in his opinion.

“Overall, this ruling adds both time and further obstacles to nuclear implementation…For us, however, the real focus was getting far enough to have contingent liabilities put in place as the key investor and credit risk to the sovereign,” said Montalto.

“Remember, no significant money or contingent liability commitments had been made so far on the process. It was still at a relatively early stage.”

To Montalto, ultimately the whole nuclear issue in SA is not about technology type, environmental issues or energy mix policy or even cost.

“Instead, we have always seen the ability to undertake such a high-cost project corruption-free as impossible. We certainly do not think today’s events have killed off SA’s nuclear plans but, alongside the other post-reshuffle issues, they have made the path from here longer and more winding,” he explained.

“Together with the more stretched path for Moody’s to reach sub-investment grade and the benign market reaction to the last reshuffle, we think this means focus remains on December and the elective conference…Now, however, the process of actual nuclear procurement may extend beyond his term and so put further pressure on the succession.” – Fin24