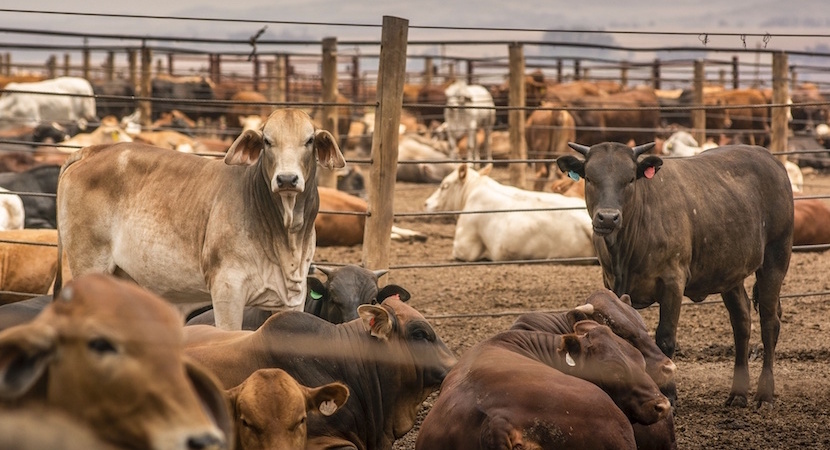 CAPE TOWN — While the financial heavyweight Public Investment Corporation’s (PIC’s) cash management has generated a lot of hot air and political propaganda in recent years, it’s latest acquisition, a 90% stake in the world’s largest bovine feedlot will almost certainly do a lot more than that. In fact, it will more than make up for any soft loans to ANC-friendly newspaper magnates – to use but one small example. The majority PIC stake in the local Karan family’s cattle feedlot in Gauteng is a shrewd investment in a global market hungry for quality beef. The business is popping, doubling export volumes last year after cracking the Chinese market, having politely refused a Chinese buy-out in favour of the more patriotic local deal. Yet more reason to be hopeful that a national turnaround is possible should the ruling party shift from predominantly ideology-driven to more pragmatic economic policies. – Chris Bateman

By Felix Njini and Antony Sguazzin

(Bloomberg) – The world’s largest cattle feedlot is expanding South African beef exports beyond the Middle East to take advantage of surging demand in China and other Asian markets.

Karan Beef (Pty) Ltd.’s feedlot south of Johannesburg is emblematic of a push by South African agriculture to boost exports of more niche products ranging from grapefruit and avocados to macadamia nuts. Increasingly, the emphasis is on high-value products rather than mass output of less lucrative crops like corn.

With 160,000 cattle on the property, which converted from dairy to beef production in about 1980, and half a million of the animals sent to slaughter every year, the 2,500 hectare (6,178-acre) operation is the biggest feedlot on a single site globally, according to director Matthew Karan.

The cattle are acquired from farmers around the country at about 8 months old. They’re more than doubled in weight to about 420 kilograms (926 pounds) within four months with feed including molasses and gluten mixed in a production line-like factory that sees specially equipped trucks constantly topping up troughs in the pens. The operation accounts for 70 percent of South Africa’s beef exports and 30 percent of the local market.

“This is as good as you would see in Texas,” said Karan, one of three sons of founder Ivor, whose own father owned a cupboard-making business in Johannesburg.

The business has been exporting beef to the Middle East since the early 2000s and last year won access to China, doubling export volumes, Karan said in an interview at the feedlot. In the year to November it shipped 4.34m kilograms of beef to China and 4.68m kilograms to the Middle East.

“China is the market that’s putting pressure on us, China needs more beef” 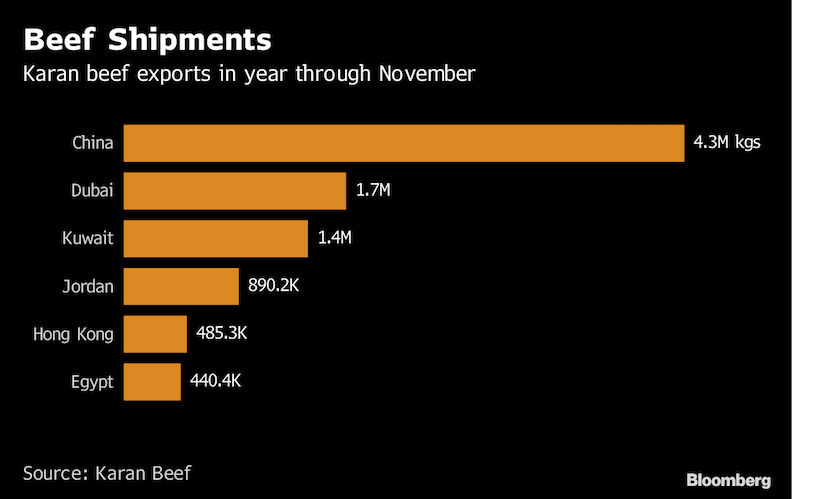 The company has had to work hard to promote South African beef, which is generally lean and “rose” in colour due to the local grading system, he said. That compares with the more marbled meat from the US and Australia, which contains more fat.

“China is the market that’s putting pressure on us, China needs more beef,” said Karan. “We have limited the volumes we send them because we don’t want to take away from the local market. There is potential for us to scale up exports, but this facility is pretty much at the maximum we could get to.”

China’s beef imports have jumped this year and are on pace for an annual record. Karan Beef is also looking at Malaysia as a new export market and is due to undergo an audit to ensure it meets the country’s halal standards early next year.

The South African beef industry more broadly is under pressure to increase production to meet local and international demand, said Gerhard Schutte, Chief Executive Officer at the Red Meat Producers Organization. One possibility is building capacity of small-scale farmers, who own about 40 percent of the nation’s livestock, but lack the competitiveness required for export markets, he said.

In October, the Karan family agreed to sell a 90 percent stake in the business to the Public Investment Corp., Africa’s biggest fund manager and the custodian of South African civil servants pensions, and black-owned Pelo Agricultural Ventures for R5.2bn ($374m) in one of the biggest attempts yet to address the legacy of apartheid in South African farming. The deal is the PIC’s largest to date in the agriculture sector, said head of corporate affairs Deon Botha.

The family will continue to manage the business for the foreseeable future, said Karan. An earlier offer of R6 billion for the entire business by Chinese investors who wanted to export all of the output was rejected, he said.

“We have to ensure we leave our legacy properly,” Karan said. “Do you really want to be the guy that sold out South Africa?”