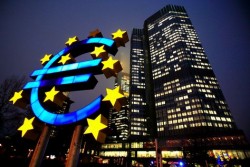 FRANKFURT, Aug 25 (Reuters) – Prodding governments to do more to boost demand and hinting at European Central Bank action to go along with it marks a major shift in ECB chief Mario Draghi’s euro zone policy away from a focus on austerity towards reviving growth.

In a landmark speech on Friday, the ECB president said it would be “helpful for the overall stance of policy” if fiscal policy could play a greater role alongside the ECB’s monetary policy, adding: “and I believe there is scope for this”.

The comments marked an end to the tacit coalition of ECB support in combination with German-style fiscal austerity that has been in place since the outbreak of the euro zone crisis. Draghi is now positioning himself closer to France and Italy.

In effect, Draghi is placing more of an emphasis on fiscal stimulus than austerity.

“It is admitting that the recovery might not come, that the euro zone’s problems go beyond structural reforms and austerity measures. It might be a U-turn for how the ECB looks at fiscal policy but not so much for how it looks at monetary policy.”

The euro zone economy is in danger of slipping again into recession and inflation is barely registering in many places.

This comes after the ECB has cut interest rates to record lows, plied banks with cheap funding, offered them a new targeted lending programme beginning in September and said it is ready to do more if needed.

So now Draghi wants governments to do more to boost demand, which has been crimped by belt-tightening in crisis-hit states on the euro zone periphery. The core is also starting to face weakness, with the Ukraine crisis sapping business sentiment.

Highlighting the bloc’s woes, a survey on Monday showed German business morale dropped for a fourth straight month in August. Euro zone inflation data on Friday is expected to slow to 0.3 percent — far below the ECB just-under-2-percent goal.

Draghi also used his speech at the Jackson Hole gathering of central bankers to point out that “financial markets have indicated that inflation expectations exhibited significant declines at all horizons” in August.

He pointed to falls in the so-called five-year, five-year forward breakeven rate — the ECB’s preferred measure of the inflation outlook, which measures roughly where investors see five-year inflation rates in five years’ time.

This measure dropped almost 20 basis points in August alone, to last trade at 1.96 percent. Traders say it is close to its 2010 record lows of around 1.90 percent.

Berenberg bank economist Christian Schulz described as “ominous” a sentence in the speech in which Draghi said of the shifts in inflation expectations:

“The Governing Council will acknowledge these developments and within its mandate will use all the available instruments needed to ensure price stability over the medium term.”

This raises the stakes for the Council’s Sept. 4 policy meeting, with financial markets growing more excised about the prospect of the ECB embarking on a policy of quantitative easing (QE) — essentially printing money to buy assets.

An intense policy debate can be expected at the meeting, though it is probably too early for the ECB to embark on QE.

Such an asset-buying plan could weaken the euro further, giving exporters’ an edge. However, opponents of the tool say there is little point in spending billions on bonds to lower their yields slightly when they are already near record lows.

Before embarking on QE, the ECB wants to assess the effectiveness of its new targeted loans, or TLTROs.

The ECB is offering banks a first tranche of the TLTROs on Sept. 18, with a second shot in December and more thereafter. It expects total take-up of 450-850 billion euros. The ECB is also intensifying preparations to buy asset-backed securities (ABS).

“I don’t think Draghi) wanted to signal that there is something coming at the next meeting but I think he does expect the discussions will be intense…,” Schulz said. “QE is definitely now possible.”

The ECB is coming under pressure from its peers to do more.

James Bullard, a top official at the U.S. Federal Reserve, on Friday called on the ECB at the Jackson Hole conference to act to bolster the euro zone economy and lift inflation.

Bank of Japan Governor Haruhiko Kuroda told Italian newspaper Corriere della Sera he does not expect the euro area to slip into deflation but is confident the ECB will act to stave off such a threat should it materialise.

Germany’s Bundesbank and other euro zone policy hawks will feel uneasy and under pressure after Draghi’s Jackson Hole speech, particularly as the German public remains deeply sceptical of loose monetary policy that many see as risky.

“More and more money is not a panacea,” the Sueddeutsche Zeitung wrote in an editorial in its Monday edition, arguing for countries to bring their economies into order. “That is a task for the politician – not the central banker.”