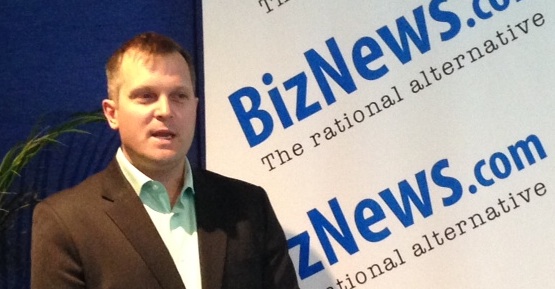 With a market cap approaching R100bn and sales close to R200bn, financial results from Brian Joffe’s Bidvest are always something of an event among Johannesburg’s investment professionals. Sasha Naryshkine among them. In this interview Naryshkine explains why he’s such a big fan of the man his Vestact colleague Paul Theron has dubbed “The Magician of Melrose Arch”. Bidvest paid a big premium over the current share price for its R3.9bn stake in Adcock Ingram, so logic suggests you could have worst ideas than coat-tailing Joffe into the pharma company. Naryshkine reckons a better bet is to align with Joffe himself – and buy more Bidvest shares. – AH

ALEC HOGG: Sasha, let’s talk about the big set of numbers just released, Bidvest’s share price has moved up 2.5% on those results.

SASHA NARYSHKINE: Yes, we jokingly say in the office (because we’re in Melrose Arch), that we’re very close to this business because their stairwell is right next to us. We call Brian Joffe the Magician of Melrose Arch, which is a reference to the Oracle of Omaha, Warren Buffett. I know you’ve made that connection before. In fact, my colleague Paul Theron saw him on his way to a watch Bidvest Wits, so he keeps busy on the weekend with the football teams – a very busy man. He’s done wonderfully well for shareholders and it just goes to show you what an individual operating in an environment with private business can do. Not only create a business worth R93bn , but also, it employs nearly 144,000 people. This is what human potential can unleash. In the South African context, we don’t celebrate these individuals as much as we should and he’s one of those individuals who should be put on a pedestal and say ‘here’s what you can achieve inside of 25/26 years’. 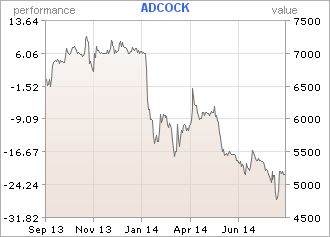 ALEC HOGG: Capital allocation: Brian Joffe is as good as anybody in the world at that. But the question has to be Adcock Ingram. The market is sceptical. I’m not as sure.  I think Joffe would have done his homework pretty well before he made the deal that he did, and what a pleasure to get in now at nearly 20 percent less than the R70 a share that he paid.

SASHA NARYSHKINE: Exactly. He had to overpay in order to trump the Chileans. Ironically, one of the other transactions they did in their food services business was in Chile. He’ll tolerate risk if it can give him the best possible return. He’s not thinking 18 months. He’s unafraid to cut if it’s not working. Everyone makes mistakes, as investors. I think you’re right. He and his team would have done their homework. Obviously, they’ve been disappointed but in the Adcock results, which I read last week and we spoke about, it said there are early signs that some of the implementation of their own processes in terms of productivity and accountability.

ALEC HOGG: Would you be buying his shares or Adcock shares?

SASHA NARYSHKINE: Correct. We do own Bidvest and it is one that we’re still buying. 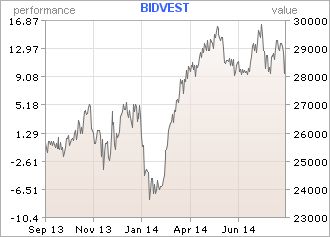 ALEC HOGG: It hasn’t done much in the last year at nine-and-a-half percent. It’s had a good day today, but generally speaking, maybe just forgotten.

SASHA NARYSHKINE: Well, I think it had a very good year along with many industrial businesses last year. They’re trading near and around those all-time highs of around 300. It’s neither cheap nor expensive. They’re growing in the mid-teens and it’s never going to be a business where you can say to yourself ‘well, how are they going to transform their specific industry’. You could have asked that about a business like Berkshire Hathaway or a business like Remgro over many years. There’s nothing special about that. What is special is (a) their capital allocation and (b) their ability to sweat those assets harder than the previous management did. That takes an enormous amount of skill to be able to recognise which business is available at a good price. But more importantly, to be able to manage that in a hands-off approach as well: I trust the people running those businesses and I’m going to make them do things better.

ALEC HOGG: Well, Bidvest is a stock that you have to wait for the retraction. Earlier this year, it came back all the way from R270 down to R240. That would have been a good opportunity. It’s now up close to R290 per share again.

Wilson Bayly: we have Mike Wylie the Chairman coming in, in just a few minutes. What are your thoughts on those numbers?

SASHA NARYSHKINE: Well, we’ve never really owned any construction stocks because of the profit margin issues. However, I’ve often heard from people in the industry if there ever was going to be one to own, it could possibly be Wilson Bayly, simply because they have better management than their peers.

ALEC HOGG: The Blue Chip of construction. I think everybody pretty much knows that. Over the years they’re the ones who haven’t had the disasters.

SASHA NARYSHKINE: Exactly, and there’s a reason for that. Its good management and again, doing the simple things right.

ALEC HOGG: Just to emphasise what you said now, when Mike Wylie stepped away as MD and became Chairman, they brought someone from within the business to take over, very smoothly, as Chief Executive. He had a six-month period. Aveng on the other hand, brought someone from outside and lost him. I suppose Murray & Roberts have also had a little bit of their challenges there. Group Five: maybe not quite as rocky as that. There’s just so much to like about Wilson Bayly in the overall picture, but they too are a construction stock and I guess, if the sector’s in trouble, you can’t really buck it.

SASHA NARYSHKINE: But quality attracts quality. If I’m a young graduate looking for a place to work, I speak to my peers in the industry, and they’ve always said ‘okay, I like the work, the ethics, the energy, and the environment’, you’ll be attracted to that in the end. That’s why it’s good to breed a proper internal culture of all those things that we spoke about earlier, with Brian Joffe. If there’s internal quality, it will attract people through the ranks and eventually, you’ll get the correct CEO  internally who understands the business and the business culture better than anybody else would. 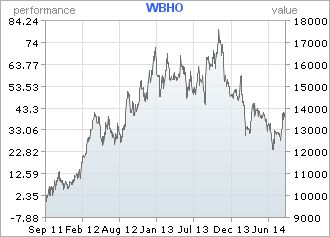 ALEC HOGG: You can buy WBHO shares now at 2011 prices. It’s come down from R175. It’s currently trading at R138. Would you be considering it on this set of results?

ALEC HOGG: Yes, but those margins are tight, aren’t they?

ALEC HOGG: Two percent in Australia. You do A$100 of business, you get A$2 in operating profit – and that’s pre-tax.

SASHA NARYSHKINE: Additionally, the problem is if there are any overruns or write-offs. However, credit must be given to them. They didn’t suffer as their peers did in the last downturn and because it’s too cyclical, you have to say to yourself ‘where are we in the cycle’. If I were investing in construction stocks, I would say ‘where are we in the cycle’. We’re a bit subdued because Government spending hasn’t been forthcoming. Private spending is cautious because at a South African level (and we’ve had this discussion about retail shopping centres i.e. how many more can you build), residential is looking a little bit… Interest rates are turning, so where to next? I think we’re in that point in the cycle where you could probably buy construction and probably buy Wilson Bayly. But you’re going to have to realise that there could be another downturn for 12 or 18 months.

You need a lot of patience because it’s difficult to tell where you are. You have to swing with the punches. In construction and mining there are going to be the points where you need to recognise ‘I need to buy now’ and maybe ‘I need to sell now’. If you’re a long-term shareholder who doesn’t like to pick a top and a bottom then these are sectors that people would tend to avoid.

ALEC HOGG: It all boils down to what’s going to happen to the economy. The economy is not going to thrive if you don’t have power. Today, we saw Business Day saying ‘forget Medupi. Even when that comes on stream, the real issue is that the power stations are old. They’re not at optimum capacity’. We’re going to speak to Andrew Etzinger from Eskom a little later to get the Eskom insight into this. That has to be a worrying issue not just for businesses, but for investors as well.

SASHA NARYSHKINE: Well, they’re one and the same, aren’t they? Investors have to wonder how businesses are going to react to such an environment. If Eskom continues to hike prices higher and higher, humans will respond because there’s a tipping point where it makes economic sense to go off the grid, as we chatted off-air. Not only will residences recognise that they need to get solar geysers or even the battery storage capacities becoming better and better…   It might be a big, initial once-off expense, but this is what will start to happen. That is what makes more economic sense with people who are bigger customers, so it’s not necessarily good for their business going further down the line. You might say our grid might be what it is for ten years, but then what does Eskom become…just an employer of 47-odd thousand people?

Eventually, the worst-case scenario would be they’d have to sell off all those assets at rock-bottom prices, so that’s not good for us as ordinary South Africans. I think businesses always respond in the best manner. They say ‘we’ll refit our entire workshops with energy-saving light bulbs’. That’s the first step.

ALEC HOGG: We’ve come to the point where you just don’t want to be hit again, you make that decision, and business is pragmatic. Capital is cowardly. It runs away from places where it’s not welcomed.

ALEC HOGG: It also finds (it’s almost like water, in a way)…it finds the path of least resistance.

ALEC HOGG: Interesting, as always – a conversation with Sasha Naryshkine. He’s a Director at Vestact.