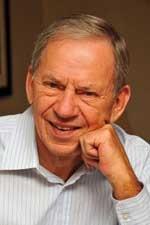 South African-based billionaire industrialist Natie Kirsh has come out to bat for his homeland with a plea that the US re-assess a decision to drop Swaziland from AGOA – the hand-up that gives certain African exports duty free status. Kirsh has substantial interests in America, primarily through his New York food services group Jetro. The significant impact of the US decision’s to drop Swaziland should be heeded by Pretoria. South African extracts enormous benefit from AGOA. If the approach towards the Swazis is anything to go by, the SA’s cosying up to the likes of Russian President Vladimir Putin could have consequences. – AH

(Bloomberg) — A U.S. decision to exclude Swaziland from the African Growth and Opportunity Act will damage the country’s economy and cost 20,000 jobs, according to billionaire Natie Kirsh.

“That translates into 150,000 or 200,000 people having nothing to eat” because each Swazi worker is supporting as many as 10 more people, Kirsh, the world’s 145th richest man with a fortune of $8.4 billion, said in an interview in Johannesburg today. “Bill Clinton initiated AGOA, George W. Bush nurtured it and Barack Obama is destroying it.”

Swaziland used AGOA to build a textile industry that employs about one fifth of the nation’s workforce. Obama removed Swaziland’s eligibility for the economic assistance policy in June because the country hadn’t “demonstrated progress on the protection of internationally recognized worker rights,” according to the Office of the U.S. Trade Representative.

“We got parliament together and we’ve already got two signed off,” Kirsh said, referring to five requirements the U.S. wants Swaziland to meet. “The other three, which need tripartite agreements, are in process.” Kirsh, 82 was born in neighboring South Africa and has Swazi citizenship.

Swaziland, with a population of just over 1 million, is ruled by King Mswati III, who has more than 10 wives and runs Africa’s last absolute monarchy. Political parties are banned in the landlocked southern African country, which gained independence from British rule in 1968.

Kirsh, who has no industrial interests in Swaziland and doesn’t formally work with its government, said he encouraged the nation to amend laws to allow for the registration of labor unions and made their leaders immune from prosecution in the event of violent strikes. Swaziland is working on a code of good practice on protests, amending its Suppression of Terrorism Act and its Public Order Act, he said.

Kirsh made his first fortune in Swaziland where he founded a corn milling and malt business in 1958. He now operates in the retail industry in the U.S. He won Swaziland’s professional golf championship in 1963 and walked with the country’s athletes at the 2012 Olympic Games opening ceremony.

“We reject the idea that the Swaziland unions don’t genuinely represent their members, they are far more representative than any other organization,” he said.

Cosatu supported Swazi unions in a series of protests in 2011 against Mswati’s rule, demanding an end to a ban on political parties. Swaziland uses the Tinkhundla system to create a government, which means 55 constituencies or Tinkhundla centers elect candidates to Swaziland’s House of Assembly.

Jack Hillmeyer, spokesman at the U.S. Embassy in South Africa acknowledged the receipt of e-mailed questions today and passed it on to the press office for the African Bureau in Washington. That office wasn’t able to respond immediately. – BLOOMBERG