(Bloomberg) — Pepkor Ltd., the South African clothing retailer bought by Steinhoff International Holdings Ltd. for $5.7 billion in 2014, plans to double its presence in Nigeria with 10 store openings per year through 2018. 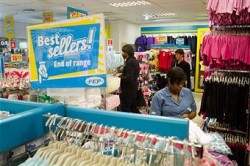 The company opened its first outlet in Africa’s most populous country in 2012 and will have 31 stores by July, Deon Conradie, Pepkor Nigeria’s general manager, said in an interview on April 27 in his office in Lagos, the commercial capital. The clothing and footwear chain plans to sustain that growth rate over the next three years, he said.

“‘Our prices are low and we cater for that middle-to- bottom market, which is the fastest growing,’’ Conradie said. ‘‘There’s a need for somebody to supply that market.’’

Nigerian demand for goods other than food is expected to increase to $110 billion in 2030 from $20 billion two years ago as Africa’s biggest economy grows and its working and middle classes seek alternatives to outdoor markets, according to McKinsey & Co. While a 40 percent fall in oil prices since June has curbed growth in the continent’s biggest crude producer, the economy is forecast to expand 5 percent in 2016, the International Monetary Fund said on April 28.

Entry to the Nigerian market requires relatively high capital investment due to inflated rental and power costs, according to Conradie. Woolworths Holdings Ltd., a South African retailer that targets wealthier consumers, said in 2013 it would close its three Nigerian stores because of costs and difficulties with getting products to shops.

‘‘I think anyone coming into the market who wants to have stand-alone stores is going to pay some expensive school fees,” said Conradie, adding that new mall developments by companies including Johannesburg-based Resilient Property Income Fund Ltd. may lead to reduced costs. “It can sometimes take three to four years to be profitable in these environments,” said Conradie, who has also worked in Angola.

Steinhoff, a Johannesburg-based furniture retailer, agreed to buy Pepkor for in November to expand into clothing and new countries. The deal, the largest purchase of a South African company in more than a decade, will create a retailer spanning three continents. Steinhoff shares have gained 29 percent this year, compared with the 10 percent increase of the FTSE/JSE Africa All-Share Index.

The increased size of Pepkor will allow it to buy more products for Nigerian stores in bulk, a way to keep prices low in a country where shoppers are used to bargaining in markets, Conradie said. The company is also attracting customers by allowing monthly payments for certain goods and is considering electricity and television-subscription payment services in its stores.