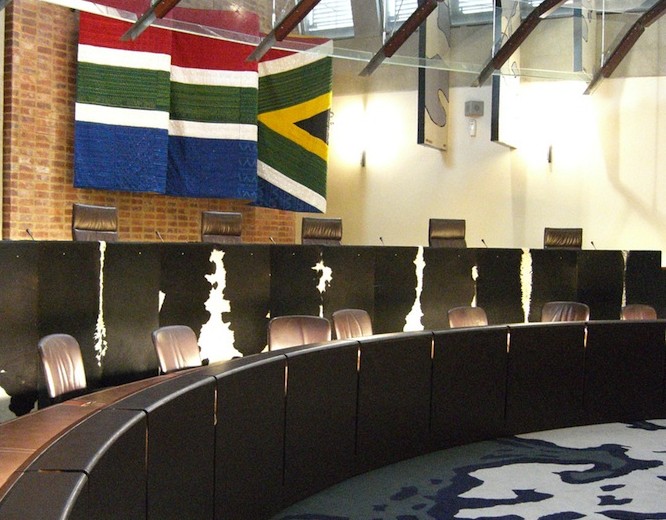 (Bloomberg) — South Africa will have to defy its own judiciary or risk the wrath of other African nations if the High Court orders the government to arrest visiting Sudanese President Umar al-Bashir on war-crimes charges.

Judge Hans Fabricius told the government Sunday to keep al- Bashir in South Africa while he decides whether to order the Sudanese leader’s arrest for two International Criminal Court indictments for alleged atrocities in the Darfur region. Al- Bashir arrived to attend an African Union summit in Johannesburg on June 13, after President Jacob Zuma’s administration published a notice granting all attendees immunity.

A signatory to the Rome Statute that established the ICC, South Africa’s obligations to arrest Al-Bashir contradict the pledge it made to the AU, said Dirk Kotze, a politics professor at the University of South Africa. The court will resume hearing arguments at 11:30 am today.

“It’s an absolute lose-lose situation,” Kotze said by phone from Pretoria, the capital. “They are really in a fix. If they do arrest him, they will probably be criticized by most other African countries. I think they will probably let him go.”

South Africa’s ruling African National Congress said on its Twitter account Sunday that it “holds the view that the International Criminal Court is no longer useful for the purposes for which it was intended.”

Al-Bashir will remain in South Africa until the end of the summit, Rabie Abdel Ati, senior official in Sudan’s ruling National Congress Party, said late Sunday in a text message.

“Immunity of all presidents participating in summit as declared by South Africa government will make the court order void,” he said.

Sudanese Information Minister Ahmed Bilal Osman said earlier by phone from Khartoum that al-Bashir had left South Africa. After Osman made his comments, Bashir was seen at the convention center in Johannesburg where the AU meeting is being held.