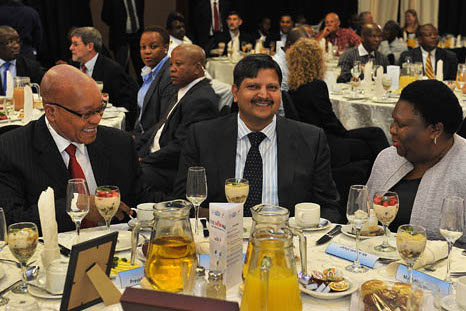 By Mpho Raborife and News24 Correspondent

Pretoria – The Gupta brothers on Tuesday obtained an urgent interdict to stop the EFF from threatening them.

Judge Johan Louw granted an order in the High Court in Pretoria, interdicting the party, its leader Julius Malema and its Gauteng spokesperson Ntobeng Ntobeng from making threats of violence against the brothers Ajay, Atul, and Rajesh Gupta, and their employees.

The interdict was granted while EFF members were protesting outside the Constitutional Court in Johannesburg, waving posters stating “Guptas must go”, “Honeymoon is over for Guptas” and “We’ll fight war with war” and singing “Shoot Zuma, shoot the Guptas”.

Louw said he would give reasons for his ruling later.

Nazeem Howa, CEO of the Gupta’s Oakbay Investments, said the intention of the application had been to secure the safety of their 4500 employees.

“It’s a victory for democracy. People who live and trade in this country must have the freedom to act within the law at all times.”

Malema said he was not inciting violence against the Guptas, and that it was simply part of robust political debate in an election year.

The court interdicted Malema and the EFF from calling for the removal of the Guptas from Gauteng or South Africa.

The party was interdicted from interfering with the activities of ANN7 and New Age journalists, and from preventing them from attending any public political event by any political party, including those of the EFF.

The EFF may not incite violence against the Guptas and their employees through public announcements, media releases, or public speech; may not damage the Gupta’s property and may not enter, or incite their followers to enter, any of the premises of the Guptas and their companies.

The EFF and its leaders may not intimidate the Guptas and their employees, or cause their employees to fear for their lives or safety, or unreasonably limit their freedom of movement and trade.

They may not promote the infringement of The New Age and ANN7’s right to freedom of expression.

The SAPS was directed to protect the Guptas’ interests if these were threatened by criminal activity resulting from the conduct of the EFF and its leaders.

The Guptas may approach the court again for further relief, should the EFF refuse to comply with the interdict.

On Thursday last week, Malema said journalists working for the Gupta-owned broadcaster ANN7 and its newspaper The New Age would no longer be welcome at EFF events and that the party could not guarantee their safety. He subsequently told the Guptas, who are South African citizens, to leave the country, or the situation “could become volatile”.He accused the Guptas of being a corrupt cartel that was in cahoots with President Jacob Zuma.

The EFF’s Gauteng spokesperson Ntobeng Ntobeng issued a statement over the weekend in which he said the Guptas “fled India in the midst of an uproar and rising resistance to their unquenchable greed and destructive habits of money laundering and downright thuggery”.The Guptas described these statements as defamatory, “absolute nonsense”, and an attempt to incite violence by spreading untrue rumours about them.

They said the EFF was using its members and resources to destroy their businesses.

Malema told reporters outside the Constitutional Court that he intended appealing the outcome.
“The Guptas need to be challenged,” Malema said.

JOHANNESBURG, South Africa, February 9, 2016/ — Oakbay Investments, the Gupta family, The New Age, ANN7 and other subsidiary companies today were granted an interdict by the Gauteng North High Court against the Economic Freedom Fighters (EFF) and its leader Julius Malema.

The applicants asked the court for relief in view of the inflammatory statements issued by the EFF with their implicit threat of violence to the staff and property of Oakbay Investments subsidiary companies and the Gupta family.

In the main affidavit, CEO of Oakbay Investments Nazeem Howa said he and the applicants had a “substantial interest in having the freedom” to exercise their constitutionally entrenched right to participate in the commerce and trade of the republic and were entitled to continue tom do so despite the threats issued by the EFF.

The court has ruled in favour of the applicants upholding their rights and those of the Gupta family as South African citizens to remain in South Africa and carry out business operations.

Howa made reference to the statements of Malema last week who at a press conference stated that the safety of the journalists working for The New Age and 24-hour news channel ANN7 could not be guaranteed at EFF events and further adding that the Guptas should leave South Africa.

Malema also referred to a letter written to the leadership of the EFF requesting explanation and withdrawal of the statements made by Malema and its Gauteng regional spokesperson who further threatened that “the Guptas must heed the call of EFF leader Julius Malema to vacate South Africa… otherwise, the predictability of what could happen to them and any of their properties, becomes a highly volatile matter. No one can guarantee their safety in this Gauteng”.

Howa said the statements contained an “unequivocal and clear message” that the EFF intended to use their members and resources to disrupt the businesses of the applicants and would stop by “no means to violently prevent the applicants from conducting their businesses on a day to day basis.

“Not only are these threats imminent and calling on violence but it further infringes on the constitutional rights of the applicants,” Howa said.

He said it was obvious from all the statements and correspondence that the EFF refused to withdraw any of the comments and threats of “imminent violence”.

“They rely on unfounded and slanderous allegations in order to incite violence. They convinced their supporters that the applicants are fraudsters and criminals without one single shred of evidence,” Howa said.

“We are left with no choice but to approach this court for the relief sought, namely an interdict to protect our assets, business, employees and their families,” Howa said.

Judge Willem Louw agreed and granted the interdict based on all the conditions requested by the plaintiffs.

Atul Gupta, speaking on behalf of the Gupta family, said:

Moegsien Williams, Editor-in-Chief of The New Age newspaper, said: “our employees have the right to go to work and do their jobs without the threat of violence. We welcome today’s ruling and hope that the EFF will cease its threats and intimidation of our staff immediately.”