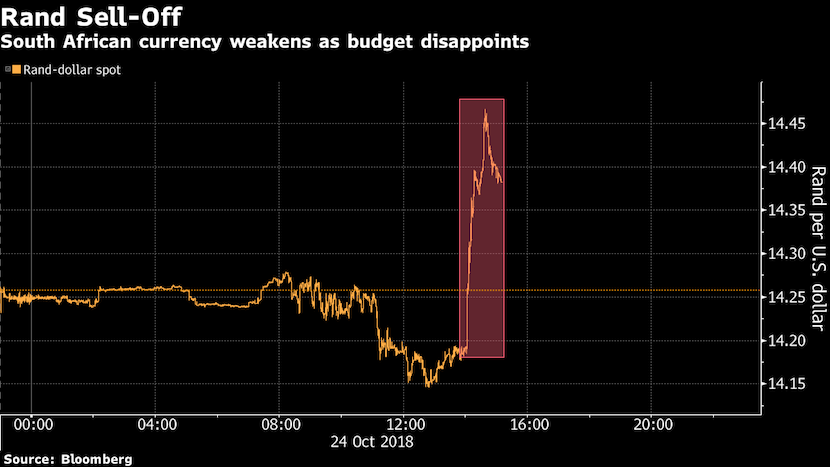 (Bloomberg) – The rand weakened along with bonds as the government’s latest debt projections increased the probability of a credit-rating downgrade that would move South Africa’s local-currency debt into junk status.

In his mid-term budget statement to lawmakers in Cape Town, Finance Minister Tito Mboweni said government debt will peak two years later, and higher, than previously forecast, the fiscal gap will widen further and state revenue will continue to undershoot.

The news is likely to weigh on rating companies including Moody’s Investors Service, which delayed reviewing the country’s debt rating earlier this month. Moody’s is the only one of the three major rating firms to assess South Africa’s debt at investment level. A move lower would spark forced selling of bonds by investors who track investment-grade debt indexes including Citigroup Inc.’s World Government Bond Index.

“I was clearly too optimistic that Mboweni would announce enough fiscal tightening to keep the ratings agencies at bay,” said Win Thin, global currency strategist at Brown Brothers Harriman and Co. “I think risks of downgrades have gone up significantly.”

Foreign investors own 38 percent of South Africa’s R1.97 trillion ($136 billion) of local-currency bonds, making the country vulnerable to capital flight. Outflows could reach $5 billion should the country lose its membership of the WGBI, according to Bank of America Merill Lynch.

Rand has softened to a weakest level today of 14.46 to US dollar from about 14.14 earlier in day before FinMin Tito Mboweni presented first Medium Term Budgetary Policy Statement. Investors concerned by cuts in three year tax revenue forecasts by R85bn. Rand now at 14.40. #MTBPS

The rand declined as much as 1.5 percent, reversing a gain of as much as 0.8 percent. It traded 0.9 percent down at 14.3915 per dollar by 3:36pm in Johannesburg, leading emerging-market currency declines. Yields on benchmark 2026 government bonds climbed seven basis points 9.23 percent, erasing an earlier drop of 10 basis points.

“South Africa remains stuck in a low-growth, high-debt environment and it is difficult to get euphoric about the outlook for the rand,” said Bernd Berg, a foreign-exchange strategist at Woodman Asset Management AG in Zug, Switzerland. “With little positive domestic drivers and a challenging external environment, it is hard to see the rand outperform its emerging-market peers in the short run.”