By Roxanne Henderson and Colleen Goko

(Bloomberg) – Naspers Ltd. will start trading on South Africa’s A2X Markets for secondary listings next week, the greatest prize yet for the upstart bourse as it seeks to challenge the operator of the country’s main stock exchange.

“It’s a big win for A2X,” said Nolwandle Mthombeni, equity analyst at Mergence Investment Managers, by phone. “In the medium to long term, this trend of secondary listings on the A2X will be an issue for the JSE Ltd., but volumes traded on the A2X are still thin.”

Secondary listings on the A2X come free of additional costs or regulatory compliance for joining companies. Even so, trading volumes remain less than 1% of those handled by JSE Ltd. as brokers assess whether they need to engage with the newcomer.

After gaining listings from local financial sector giants Standard Bank Group Ltd. and Sanlam Ltd. in recent months, Naspers’s arrival is another “game changer” for the fledgling exchange as “no broker can now afford not to be able to transact on A2X,” Chief Executive Officer Kevin Brady said by phone Tuesday.

There is increasing investment in infrastructure by firms wishing to operate on A2X, Brady said. “We expect to see quite a sharp jump in liquidity levels” in the first half of next year, he said. 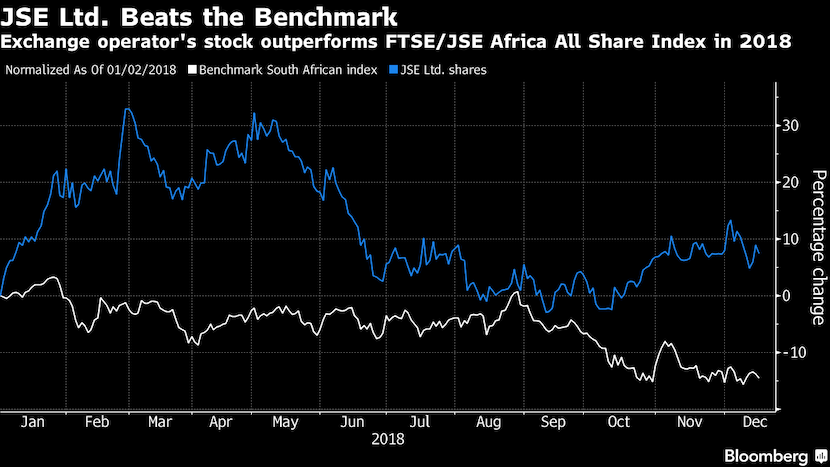 JSE Ltd. shares dropped 1.3% as of 2:48pm in Johannesburg. The exchange-operator’s stock has gained 7.3% in 2018, a better performance than South Africa’s benchmark equities index, which is down 14%, the most in 10 years.