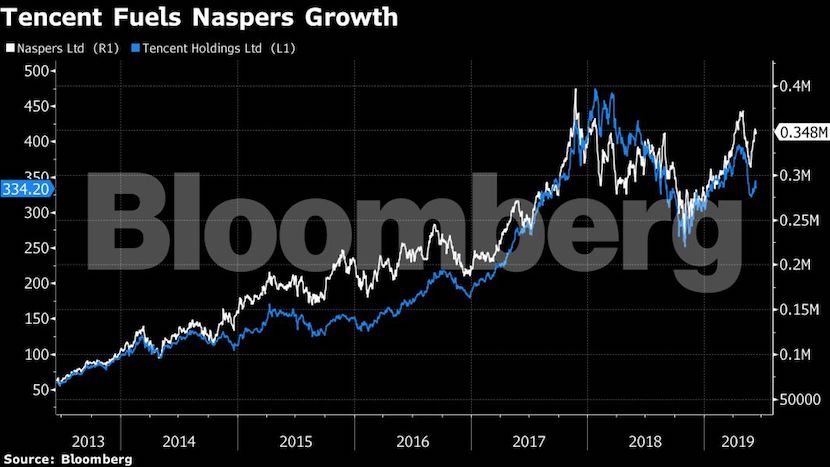 (Bloomberg) – Naspers Ltd.’s full-year earnings rose by as much as a third ahead of the technology group’s planned asset spinoff in Amsterdam, a move designed to reduce its dominance of Johannesburg’s stock exchange.

Core headline earnings per share, which strip out non-operational items, are expected to have grown by between 31% and 33%, the Cape Town-based company said in a statement ahead of more detailed financials scheduled for June 21.

The market value of Africa’s biggest listed company has increased by five times in the past six years, largely due to growth in Naspers’s 31% stake in Chinese internet giant Tencent Holdings Ltd. to about $128bn. The company now makes up about 25% of the FTSE/JSE Africa All-Share Index, compared with 5% in 2013.

To rectify that, Naspers plans to separate its global technology and e-commerce investments into a new company in the Netherlands next month. The move will reduce the need for South African institutional investors to sell shares to stay within exposure limits to a single stock, while attracting new global shareholders, Naspers said last month.

While Naspers didn’t give a reason for the improving operating performance, Tencent reported a better-than-expected 17% rise in first-quarter net income last month. The South African company’s stake in the Chinese firm is worth more than Naspers as a whole, and management led by Chief Executive Officer Bob Van Dijk are striving to reduce that gap.