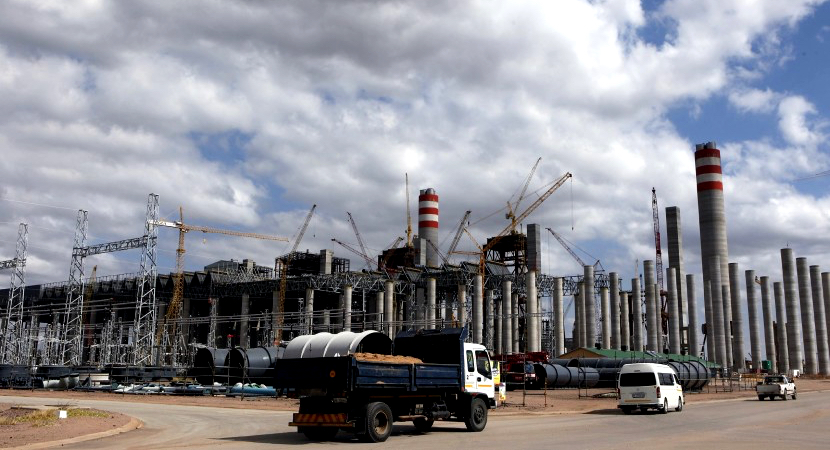 By Paul Burkhardt and Michael Cohen

(Bloomberg) – South Africa’s economy was roaring along in 2007 on the back of the global commodities boom when power shortages struck, bringing mines and smelters to a halt.

Then-President Thabo Mbeki publicly apologised for prevaricating about adding generation capacity despite repeated warnings that supply was constrained, and state power utility Eskom swiftly opened the spending taps. The botched implementation of the expansion plan has haunted the country ever since.

Eskom in 2007 alone approved 13 projects worth more than R200bn ($13.2bn) that it said would boost electricity output 56% by 2017. The flagships were two mammoth coal-fired power stations, Medupi and Project Bravo, that were both expected to be finished by 2015 at a total cost of R163.2bn.

Instead of resolving the energy shortfall in Africa’s most industrialised nation, the plants have been textbook studies on how not to execute large infrastructure projects. Medupi’s completion date has been pushed out until next year or 2021 and Kusile, as Bravo is now called, is scheduled for 2023. The delays have given South Africa months of rolling blackouts, an economy in deep trouble and a huge headache for its president, Cyril Ramaphosa.

While Eskom’s current management and Ramaphosa’s government have sought to come to grips with the problems at Medupi and Kusile, there’s no guarantee the plants will ever perform optimally.

“They needed to basically call a halt to the whole project and do a reset – to go back into the contracts and the design and engineering,” said Mike Rossouw, who was appointed as an independent consultant to Eskom in 2014 and advised it on how to address its construction challenges. “They never did that and haven’t at any stage and the consequences are there for all to see.”

Meanwhile, the anticipated price tag has ballooned to R451bn, including the costs of interest during construction and fitting the plants with equipment needed to meet environmental standards. That equates to Eskom’s entire current debt, a burden that’s left it unsustainable and reliant on a three-year, R128bn government bailout to remain solvent. 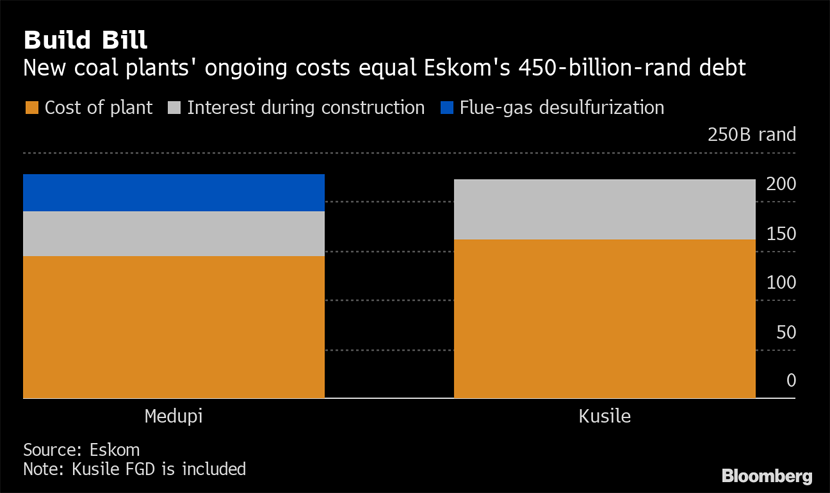 The utility now concedes multiple failings that led to cost overruns and delays, including inadequate planning and front-end engineering development, plus ineffective contracting strategy, execution and oversight. Contractors also performed poorly and incurred limited penalties, while strikes and demonstrations compounded the implementation woes. Turnover at the top -the company has had 11 permanent and acting chief executives since construction began – didn’t help.

Steve Lennon, Eskom’s former group executive for sustainability, recalled how Medupi’s construction went awry when the utility was ordered to fast-track the process.

“The project was under development and implementation at the same time, which is clearly a recipe for disaster in terms of any good practice for major project execution,” he said by email. “There was a shortage of contractor capacity given the worldwide demand for large-scale generation plant at the time. That meant that the main contractors could virtually name their price and conditions.”

Eskom also assumed much of the risk of developing Medupi and Kusile when it decided to coordinate the projects, rather than appointing an outsider to oversee engineering, procurement and construction – a common practice in plant development.

“The South African market at the time was not ready for a single contractor to handle the onerous risk of executing a project of this complexity and magnitude,” Eskom said in an emailed reply to questions. The company also wanted to develop skills and create jobs by bringing in small and medium-sized contractors, it said.

Medupi and Kusile, expected to be among the world’s biggest coal-fired stations, share the same configuration. The latter’s two towering smokestacks and six enormous boilers are visible from the main highway that runs between Johannesburg and the east coast.

Speculation that the plants could be delayed first surfaced in 2008. While Eskom initially denied that the projects had gone off track, it was forced two years later to adjust the time lines and anticipated price.

Eskom Rotek Industries, a wholly owned Eskom subsidiary, was appointed to establish the Kusile site – a process that entailed digging drains, laying pipes and doing the earthworks and terracing. Its contract was terminated early on because it was unable to deliver. That created a bottleneck for other contractors, which filed for damages.

Eskom said it has paid out R14.8bn to settle the claims, which totaled R252.9bn, and it filed claims of its own worth R2.6bn against companies that failed to meet their contracts. 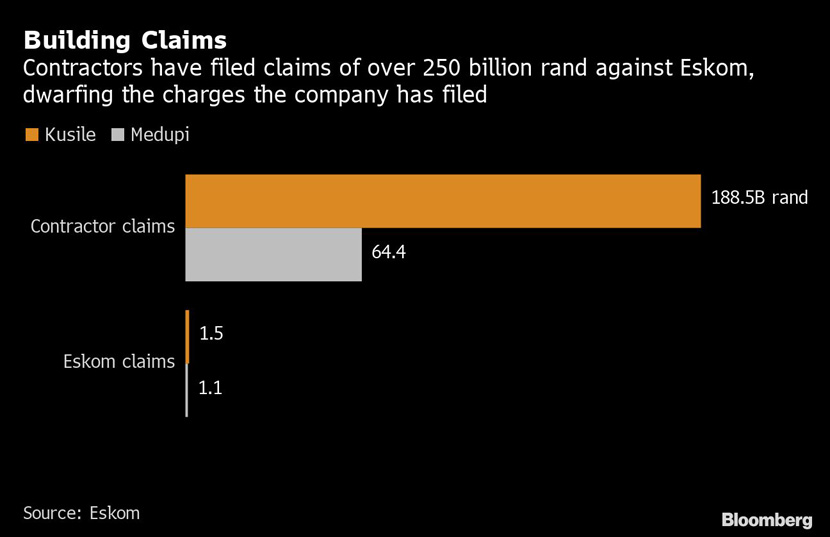 The delays and design changes reverberated throughout the program. While the manufacture of equipment continued as planned, it was left sitting in warehouses or on site with the clock ticking on warranties, according to Makgopa Tshehla, a professor at the University of South Africa and an expert on large construction project management.

The biggest construction headaches were caused by the installation of deficient boilers supplied by Mitsubishi Hitachi Power Systems Africa, according to Eskom. Talks on how to resolve the problems are ongoing, according to Jan Oberholzer, the utility’s chief operating officer.

Mitsubishi Hitachi didn’t respond to questions about the defaults or the discussion of plans. In 2014, Hitachi Power Africa, an earlier iteration of the company, blamed local subcontractors for faulty welds on the Medupi boilers, but Eskom’s former finance director, Paul O’Flaherty, said the main contractors were at fault.

Tshehla says Eskom’s board should ultimately bear most of the blame for failing to properly assess the projects and the related risks, and for not holding management accountable for poor performance.

Oversight deficiencies were compounded by the repeated changes to Eskom’s top management and demands by politicians for them to get a move-on with the projects. 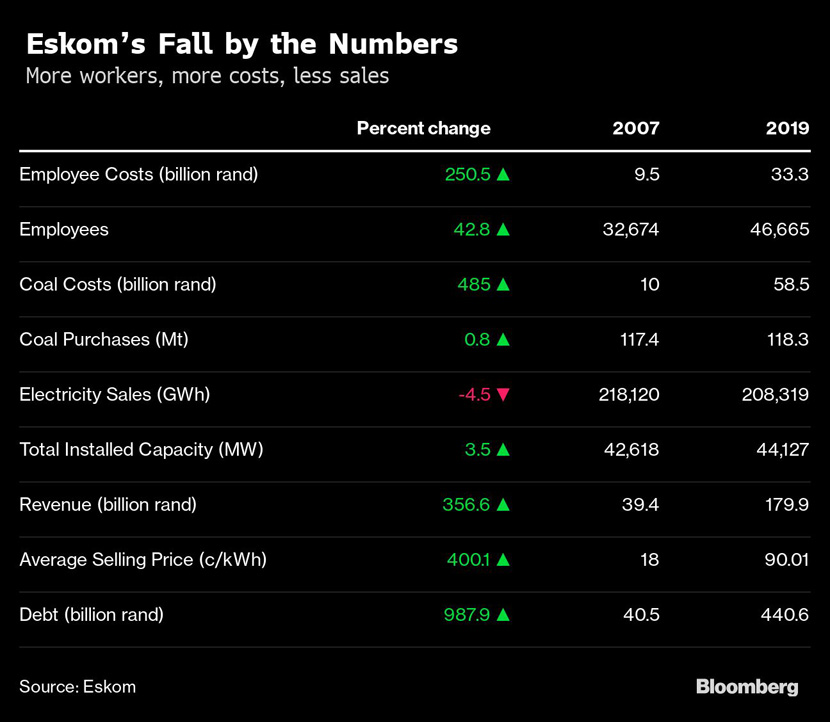 “Eskom was already under the whip for lack of capacity so they were chasing like mad dogs to get those power plants done,” Rossouw said. The management “took on responsibility and risk which I don’t think the board ever understood properly. They were hardly capable of conveying a concise, understandable picture to the board.”

In 2012 Eskom invited then-President Jacob Zuma to attend a pressure test on Medupi’s first boiler to show that the project was running according to plan. Rossouw recounted that management ignored engineers’ advice that the plant wasn’t ready and, when steam was pumped into pipes connected to the boilers, tools and other debris were blown out.

Zuma gave no indication that he was aware anything was wrong. He said in a prepared speech that he was “delighted” with the progress being made on the project and congratulated his minister, Eskom and its workers “for a job well done”. Zuma returned to the plant in 2015 when it delivered its first power to the grid – two years later than anticipated at the time of his previous visit.