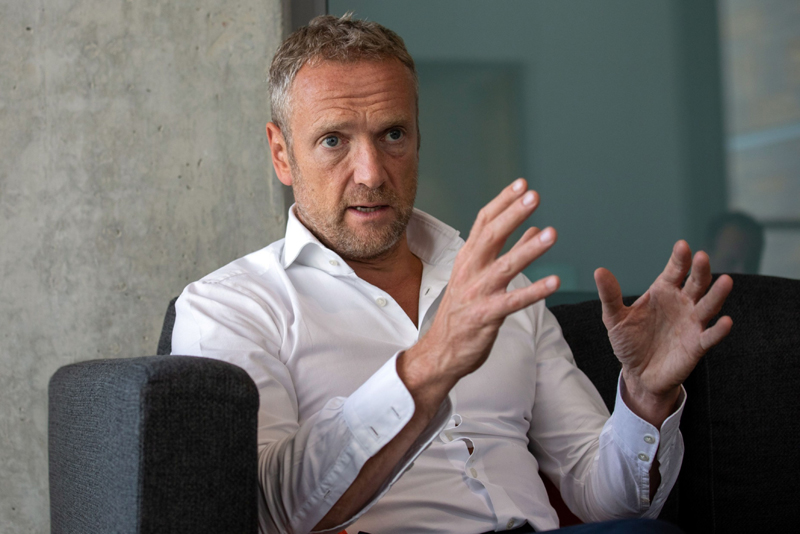 (Bloomberg) – Prosus Chief Executive Officer Bob van Dijk is on to something big with his bid for Just Eat, and he isn’t going to let it get away easily.

The giant Naspers spinoff officially filed its hostile offer for Just Eat on Monday, going up against both a unanimous rejection from Just Eat’s board, and a rival bid from Takeaway.com that was supposed to close by the end of the year.“In terms of opportunity, the food space is very, very, very large,” Van Dijk said in an interview prior to the bid.

It’s “probably the largest opportunity I’ve run into in my lifetime.”

Just Eat would be a key piece in building out Prosus’s take out empire. Begun in 2013 with a $2m investment in Brazil’s iFood, since 2016 it has invested about $2.8bn in the sector. The company also has holdings in India’s Swiggy and Germany’s Delivery Hero, but it doesn’t want to stop there.

An acquisition of Just Eat would result in a combined presence in more than 50 markets, and a number one position in 40 of those, according to Prosus. In Brazil, the deal would combine with Just Eat’s existing stake in iFood. Prosus is giving investors until December 11 to accept the 710 pence per share deal.

Prosus is keen to sell the idea that its food investment companies all get along rather than cannibalise each other. Swiggy CEO Sriharsha Majety said in an interview prior to Prosus’ bid for Just Eat that his team will sometimes hold calls with other Prosus companies if they think they solved a similar problem in a more effective way. Similarly, Fabricio Bloisi, chief executive of Movile, which owns iFood, said he was inspired by how Swiggy built kitchens where restaurants cook meals exclusively for delivery orders.

Last year, Prosus sent a task force of as many as 40 people to Brazil to help iFood develop a new artificial-intelligence strategy, helping the company reduce prices by predicting where and when people will want a certain dish.

If it succeeds in acquiring Just Eat, Prosus plans to make significant investments in product innovation, technology and delivery capabilities to ensure the delivery company maintains its market position.

“Just Eat’s under investment in the sector has lead to them losing market share, and having its share price under pressure,” Van Dijk said in a conference call on Monday. “We have been speaking to shareholders on how the business is doing and what the long-term potential is – and the investment required to take it there.”

WORLDVIEW: Naspers loves food delivery, but there are huge risks

Takeaway.com’s selling point is that it actually knows how to run a food delivery startup, rather than just owning one. Both the management of Just Eat and Takeaway.com are betting that their combined experience in turning a profit – in an industry scattered with loss-making startups – will help convince shareholders that it can fight off sizeable rival startups that may also join forces.

The fight over Just Eat comes amid an increasingly competitive landscape around the world for services that pick up or prepare meals and deliver them to customers’ front doors. Increased smartphone adoption, as well as innovations in mapping, logistics and other technologies have driven down the costs of online food delivery and helped catapult growth in the sector in recent years.

Still, margins can be tight and startups are going up against tech giants including Uber Technologies to strike deals with the most popular restaurants and keep customers happy.

While some Just Eat investors have complained about both the 710 pence-per-share cash offer from Prosus and Takeaway’s all-stock offer, currently valued at about 627 pence, neither company has indicated that they’d raise the bid.

For now, it’s down to the shareholders to make up their mind. Aberdeen Standard Investments, which holds about 5% of Just Eat, said that Prosus needs to increase its offer by 20%. The investor also wanted Takeaway to increase its bid. Eminence Capital, which holds about 4%, in September said Takeaway’s bid undervalued Just Eat and that it planned to vote against that deal.

“I can fully understand that the current cash values of both our and the competing offer aren’t particularly appealing to the Just Eat shareholders, and seem to be quite far removed from the fair value of Just Eat,” Jitse Groen, CEO of Takeaway.com, said in a statement posted on the company’s website on Monday. “We do however believe that the agreed merger ratio between Just Eat and Takeaway.com is appropriate.”