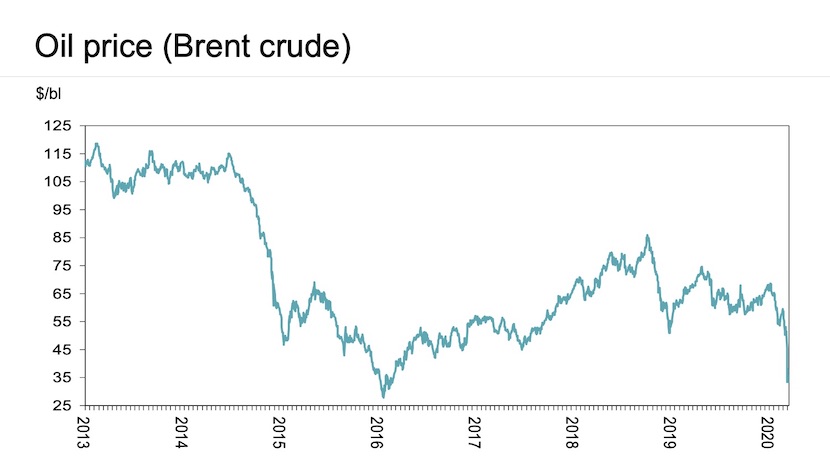 The international oil price (Brent crude) plunged from around $53/bl at the start of March to $36/bl on 9 March and $29/bl on 16 March, a drop of 45%. Essentially, the decline in the oil price can be ascribed to the breakdown of talks between OPEC and Russia regarding the need to cut oil production, as well as Saudi Arabia’s response to this breakdown in discussions by indicating that they would increase output. In addition, the severe economic disruptions caused by COVID-19 in recent days has led to a sharp fall-off in oil demand, further undermining the oil price.

According to the Department of Energy there is currently a massive daily over-recovery on the SA petrol price (95 octane) of R2.91 per litre. This is despite the fact that the Rand has declined significantly since the end of February 2020, depreciating by almost 5% against the US Dollar. Furthermore, in the first 16 days of March the average over-recovery on the petrol is R1.37/l. All of this means that if the oil price stays around $30/bl and the Rand/$ exchange rate hovers around R16.50/$ then the South African petrol price should decline by as much as R2.00/l next month.

There are a number of important implications of a R2.00/l drop in the SA fuel price. Firstly, it would significantly reduce consumer inflation, deducting a massive 0.6 percentage points from the monthly increase in prices. This would have the effect of reducing SA’s annual rate of consumer inflation in April to around 3.5%y/y (assuming that our forecast for the other components of inflation are largely on-track). Secondly, a R2.00/l cut in the petrol price would reduce the cost of filling a 60/l tank of petrol by R120. That would tend to be more beneficial than a 25bps cut in the mortgage interest rate assuming that you fill your tank of petrol only once a month and you have an outstanding home loan of around R750,000.

We are still waiting for the government to announce a set of fiscal and other measures to support households as well as small business during the COVID-19 period of “isolation”. In addition the South African Reserve Bank is expected to announce at least a 25bps cut in interest rates (possibly a 50bps cut) following their MPC meeting this week. The combination of fiscal support (hopefully this includes some form of additional social safety net, albeit modest, while COVID-19 remains a threat), a lower interest rates and a R2.00/$ cut in the petrol price would provide many economic participants with some meaningful relieve.