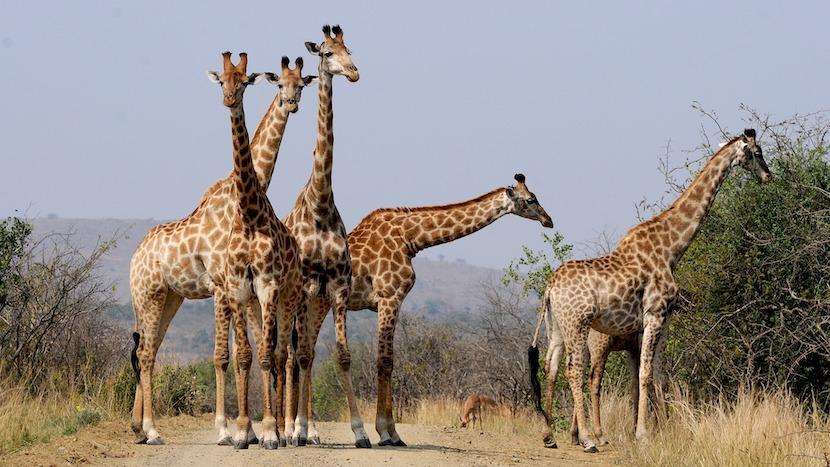 (Bloomberg) – More than half the world may be on lockdown, but more people than ever are going on safari.

Jarryd Du Preez, a guide at andBeyond Phinda Private Game Reserve in KwaZulu-Natal, South Africa, recently fielded questions from safari goers in India, Chile, Bahrain, Germany, Canada, the US, the UK, Saint Lucia, and Russia as he pointed out two white rhino calves hidden behind an adult female. Can you tell the sex of the calves? (They were males.) Are poachers a danger? (Always.)

Africa’s golden light cast its magical glow as a soft breeze rustled through patches of shrubbery called stinking grass. “What does stinking grass smell like?” someone asked.

In person, the skunk-like odor is easy to discern; over social media, where this scene played out in real time, scents are imperceptible. But luckily for andBeyond — which has been posting twice-daily game drives via Instagram Live since March 28 — few viewers seem to mind. Already, the company has seen a 50% increase in engagement, a 100% increase in its daily new followers, and a 130% increase in organic reach to its Instagram page, says Nicole Robinson, andBeyond’s chief marketing officer.

Success came so fast and furiously that within four days, the company was supplementing its efforts with twice-daily, three-hour-long “WILDwatch” broadcasts in collaboration with WildEarth on Facebook and YouTube, where the longtime purveyor of safari videos is also garnering record-setting numbers.

These livestream game drives aren’t just a promising pathway toward economic recovery following the Covid-19 pandemic, says Robinson. They’re also a desperately needed balm for quarantine wanderlust and, in less obvious ways, an important lifeline for the animals on screen.

Like andBeyond, Singita — which operates 15 ultra-luxe lodges and camps across four countries in Africa — has been livestreaming virtual game drives twice daily on Facebook and Instagram since March 25. They’re led by resident photographer and former guide Ross Couper, whose broadcasts have included a female leopard and her two young cubs, the roaring Nkuhuma pride of lions, and parades of elephants.

“Giving our viewers a daily, live glimpse of our wilderness areas reminds one of the simplicity of nature,” says Couper. “It’s soul restoring.”

We’re loving being able to bring the African wilderness to you through our live game drives on Instagram. We have limited signal in some parts of our reserve but whenever possible we will go live in the morning from 6:00–8:30 (SAST) and in the afternoon from 15:30–18:00 (SAST). pic.twitter.com/nmWM1aZLMI

The drives also elicit important discussions about conservation. While answering viewer queries about how social distancing works in the bush (no more than two rangers in a Jeep, sending home all but a few staffers kept on to maintain lodges), Couper and his colleagues have spent time discussing the importance of not sheltering in place within a game reserve: It would put the animals at risk.

Without guests, they explain, guides at these lodges have taken on additional patrolling responsibilities. Fewer tourist vehicles mean fewer eyes and ears on the ground. And that means more potential poachers.

“If tourism collapses, the ripple effect could wipe out decades of proactive conservation work on the continent,” warns Luke Bailes, Singita’s founder and chief executive officer. Financial strain among rural communities tends to link directly to a rise in illegal bushmeat hunting and poaching, he explains.

Then there’s the question of conservation NGOs running out of money in the absence of tourism revenues.

Lewa Wildlife Conservancy, which operates nine lodges in Kenya, has also recently launched live safaris. CEO Mike Watson says the halt in  tourism will deplete more than 22% of the Conservancy’s core revenue, or roughly $1.2m in 2020 — all money that ordinarily supports wildlife conservation and vital community programs. Worse, he’s anticipating increased poaching pressure in the coming months; some reports in Asia are touting rhino horn as a cure for this coronavirus.

“Without guests staying with us to experience Africa’s most extraordinary wilderness areas, our ability to fund their ongoing protection will erode fast,” says Keith Vincent, CEO of Wilderness Safaris, referring to the small conservation levies baked into the price of luxury trips. (It often costs as little as $5 per person, per night, but adds up.) On April 2, his 41-camp company joined its friendly rivals in sharing guided nature walks on Instagram stories and, where Wi-Fi allows, Facebook Live and Instagram Live.

“It is in difficult times like these that we need to come together with creative solutions to ensure a sustainable future for ecotourism,” Vincent says. He hopes that creating grassroots awareness of these issues might inspire small donations to compensate for the incremental fees that customarily fund philanthropic work.

Given the urgency of the pandemic and its downstream implications on wildlife, social media managers such as andBeyond’s Robinson are trying to toe the lines between sensitive marketing, philanthropic calls to action, and pure escapism.

A refreshing alternative to the Netflix series Tiger King, footage of hippos laughing in a watering hole and baby elephants at play has gotten people yearning for the bush at a moment of insatiable wanderlust. “This is getting me through quarantine” and “wonderful escape from isolation status” are common sentiments shared by viewers. Many say they “can’t wait to take a trip in 2021.”

It’s too early to tell if they’ll follow through with bookings, says Robinson, but she hopes that “if people engage with our guides and fall in love with andBeyond now, they’ll keep us top of mind when they are ready to book.”

Singita’s game drives engage viewers in a deeper way than still images on social feeds do, says  Lindy Rousseau, marketing director. She adds that live safaris have yielded a 351% increase in impressions and a 407% increase in engagement, with comments skewing more toward optimism (“you are giving me hope”) than the superficial (“wow, pretty”).

This engagement has helped maintain a trickle of inquiries and some new bookings for later this year and 2021. Every bit matters for a company with just 298 guest beds in its entire portfolio. Deposits for future trips can help retain Singita’s 1,600 employees, including 130 poachers-turned-game scouts.

Not everyone has the good fortune of being able to livestream from the bush; Beks Ndlovu, founder of African Bush Camps, says his camps are too remote for reliable Wi-Fi. But many small safari businesses are still finding ways to get in on the trend. For example, Tswalu, a private game reserve in South Africa, and Angama Mara lodge in Kenya have been streaming Q&As with resident researchers and photographers.

Says Wilderness Safaris’ Vincent: “We hope that when we all come out of this crisis together — stronger and more unified — the world’s intrepid travelers will come back to visit us in Africa to experience life-changing journeys that make a difference.”

If planning a trip isn’t possible, consider donating to any of these organizations — all working in collaboration with the outfitters mentioned above.

Singita Lowveld Trust Anti-Poaching Unit is a highly skilled team of tracking dogs and handlers that pursue intruders and sniff out rhino horn and ammunition at Singita Sabi Sand in South Africa. The annual operation costs $240,000, one trained tracking dog, $7,000. Donations of any amount are accepted here.

Wilderness Safaris’ Wildlife Trust funnels funds to its many projects, including the Scorpion Anti-Poaching Unit in Hwange National Park in Zimbabwe and ranger teams that guard desert lions in Namibia.

Empowers Africa is a US fiscal sponsor that supports programs in sub-Saharan African, ranging from Pangolin.Africa to the Cheetah Conservation Fund.

Rhinos without Borders is accepting donations to help offset the monitoring of andBeyond’s translocated rhinos in Botswana during this time.

Natural Selection Covid-19 Village Support Program is fundraising to transport food parcels to remote villages in Botswana and Namibia amid this unprecedented emergency.