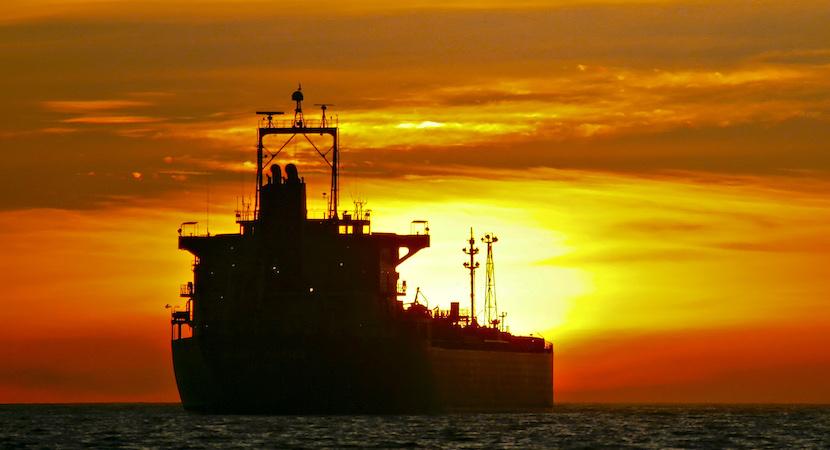 The global lockdown to fight the coronavirus had an unexpected victim, ironically on the eve of the 50th anniversary of Earth Day – the dramatic drop in the futures price for West Texas Intermediate (WTI) oil to negative $37+ a barrel overnight. What it boils down to is that traders with oil contracts for May delivery, and now later contracts, are willing to pay anyone to take the crude off their hands. Today, the panic caused violent intraday swings, spilling over to the next month’s contracts, showing that this month’s US-brokered deal to curb output by among others Saudi Arabia and Russia proved no match for the oil glut and the drop in demand caused by the  Covid-19 lockdowns. The collapse in oil is also unnerving currency and equity markets. Locally the rand weakened to below R19/$ and Sasol continues to suffer; the already battered share price is now down over 80% since the beginning of the year as the market seemingly prices in years of bad news on oil prices and that the balance sheet constraints will prevail for a very long time. – Editor 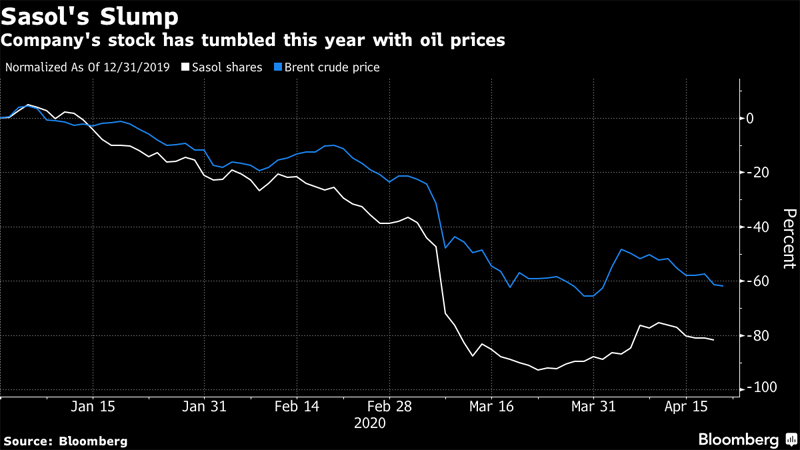 (Bloomberg) – The oil meltdown accelerated, with huge losses sweeping through markets as the world runs out of places to store unwanted crude and grapples with negative pricing.

West Texas Intermediate plunged below zero on Monday for the first time in history with the contract for May nearing expiration, leaving traders in a panic as they tried to avoid taking delivery of physical barrels. On Tuesday the losses spread to the next month – highlighting the massive glut in the market causing the rout rather than any technical quirk.

The collapse of later contracts underscored the severity of the crisis. Storage tanks, pipelines and tankers are rapidly being overwhelmed by a vast oversupply caused by slumping fuel demand as countries are locked down to fight the coronavirus. Traders everywhere are having to reassess their risk after Monday’s unprecedented collapse, leading to violent intraday swings.

“Once you have negative prices in crude oil, the limits change totally,” said Olivier Jakob, managing director at Petromatrix GmbH. “What happened yesterday was extremely bad for the confidence in the futures market. It’s not just back to normal trading anymore.” 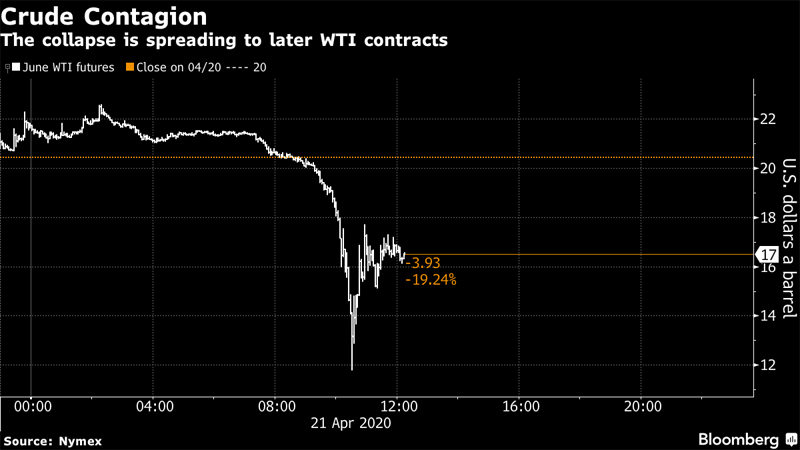 The collapse is reverberating across the oil industry, with prices trading below zero across America. WTI Midland in Texas – a flagship marker for the US shale industry – was at -$13.13 a barrel, while crude in Alaska was at -$46.63.

There are signs that these stunningly low prices are here to stay as tanks across the globe fill up. Royal Vopak NV, the world’s biggest independent storage company, said almost all of its space is sold. Crude stockpiles at Cushing – America’s key storage hub and delivery point of the WTI contract – have jumped 48% to almost 55 million barrels since the end of February. US nationwide inventories are estimated to have increased another 14 million barrels last week, according to a Bloomberg survey.

Countries fighting the virus pandemic have been on lockdown for weeks, drastically cutting road and air travel and stopping most economic activity. Many governments are extending confinement measures, which is ravaging demand further. That is forcing refineries from Asia to Europe and the US to use far less crude. Portuguese processor Galp Energia SGPS SA said Tuesday it will suspend operations at its Sines refinery for a month as its storage tanks are nearly full.

The speed and scale of the crash has been so massive that it has left plans for unprecedented production cuts by OPEC and its allies completely ineffective. To make matters worse, the supply reductions only start from next month, and the current market continues to be awash with crude. Russia said that it is monitoring price closely, but hasn’t decided on Venezuela’s call for a OPEC+ committee meeting.

“This is the kind of price that focuses minds in oil-producing nations, and minds are so focused they’re probably telekinetic at this point, or at least bending spoons,” said Kevin Book, head of research at ClearView Energy Partners.