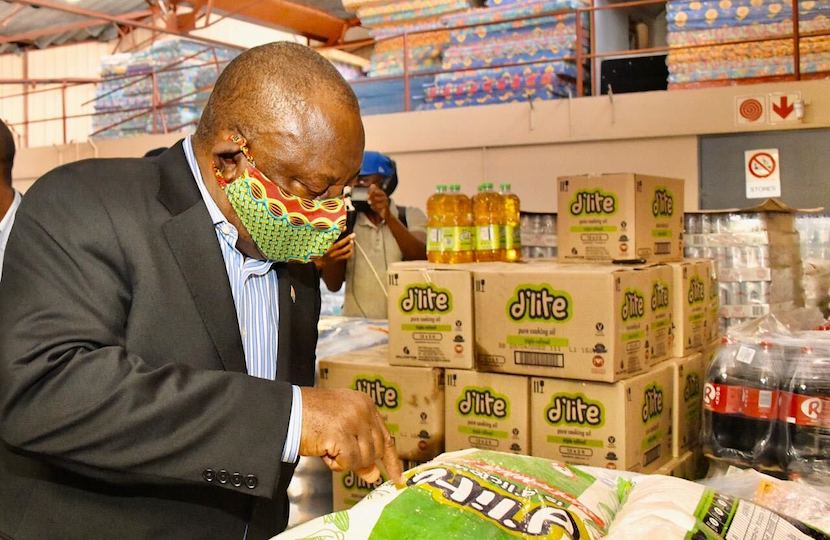 South Africa goes into Level 4 lockdown on the 1st of May. But what exactly does this mean, and what are the changes from Level 5. The below was published by the Government, which highlights the new permissions and the restrictions which remain in place. 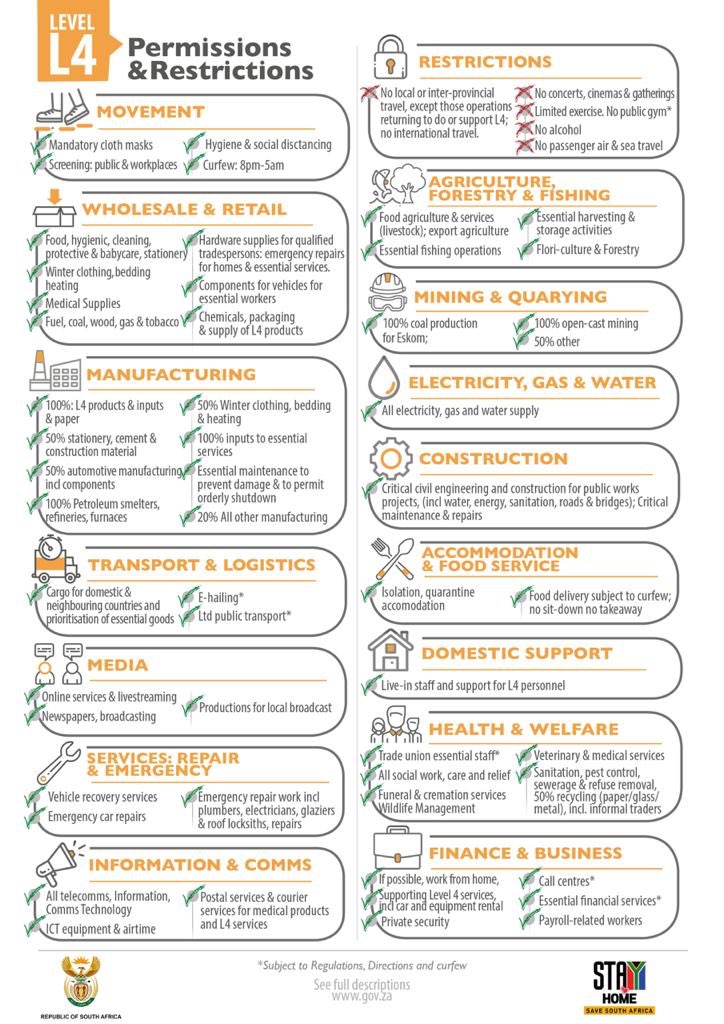 (Bloomberg) – South Africa’s government will next week begin easing a nationwide lockdown that’s devastated the economy, while retaining a raft of restrictions to curb the spread of the coronavirus.

The country will move from the maximum disease-alert level 5 to a national level 4 on May 1, allowing the phased reopening of some businesses and industries subject to strict precautions, President Cyril Ramaphosa said Thursday in a televised address to the nation.

A maximum of one-third of workers will be allowed to return to work. Government ministers will give details of the easing in coming days, and industry groups will be invited to comment.

“While a nationwide lockdown is probably the most effective way to contain the spread of the virus, it cannot be sustained indefinitely,” Ramaphosa said. “Our people need to eat and they need to earn a living.”

Businesses will only be able to begin planning when and how to reopen once new lockdown regulations are published, and with South Africa entering a long weekend, that may only come by April 28. While various iterations of the rules were circulating on social media on Friday, the government’s communication service said they weren’t official and draft proposals could be subject to revision.

Ramaphosa said the nation’s borders will remain closed, travel between provinces is banned, no large gatherings other than funerals will be allowed and bars must stay closed. Restrictions on the sale of cigarettes and some other goods will be lifted and people will be allowed to exercise outdoors under strict conditions. Buses and trains can resume operating.

To ensure the response to the pandemic remains targeted, there will be a national alert level and separate levels for each province, district and metropolitan areas, allowing for differentiated restrictions, Ramaphosa said.

The government initially imposed a 21-day lockdown on March 27 to curb the spread of the virus, later extending it by two weeks. Enforced by the police and military, it only allows people to leave their homes to buy food, collect welfare grants and seek medical care – unless they provide essential services.

“I would say it’s too late, but at least it’s a relaxing of the strict measures that were imposed on the economy,” said Dawie Roodt, chief economist at the Efficient Group. “The big question is, once we are at level 4, what would determine if we go back to level 5 again? What would be the triggers to move between stages?”

While South Africa’s 3,953 coronavirus infections and 75 fatalities are low compared with epi-centres such as the US, Spain and Italy – which the World Health Organisation attributes to its stringent containment measures – its economy has cratered. The central bank expects it to shrink 6.1% this year, while the IMF anticipates a 5.8% contraction.

“We cannot take action today that we will deeply regret tomorrow,” Ramaphosa said. “We must avoid a rushed re-opening that could risk a spread, which would need to be followed by another hard lockdown, as has happened in other countries.”

Earlier this week, the president announced a R500bn ($26bn) support package aimed at reigniting growth and supporting those worst affected by the lockdown. It includes 200 billion rand’s worth of guarantees for banks to encourage them to lend, a 100 billion-rand allocation to support and create jobs, and increased welfare-grant payments for six months.

“South Africa implemented some of the most draconian containment measures in the world. This has come at a huge cost to the economy. Even though the most stringent containment measures are being eased, large parts of the economy will remain closed. This together with the limited direct fiscal policy support means that the economy will continue to haemorrhage. The cumulative damage will depend crucially on the length of lockdown.”