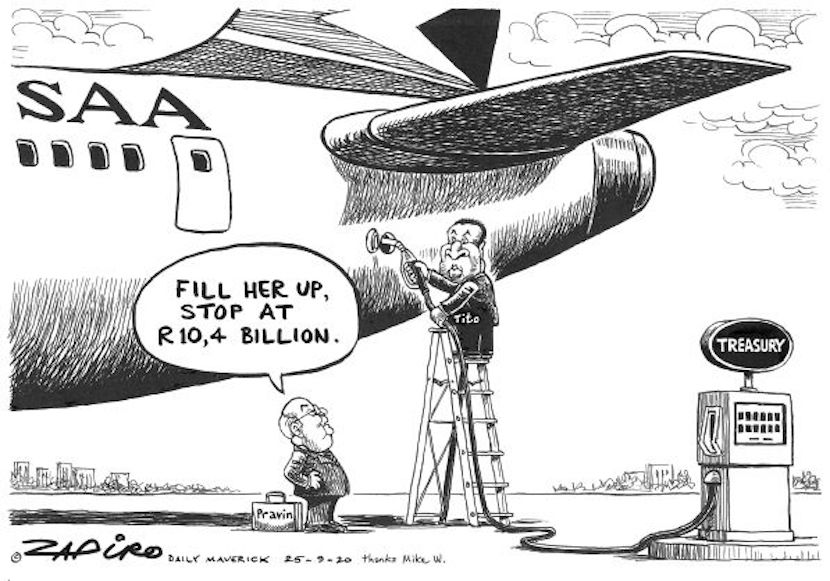 (Bloomberg) –South African Finance Minister Tito Mboweni again expressed his doubts about the need for a national airline less than a month after agreeing to find the cash for a R10.5 bn ($685 mn) bailout of the stricken carrier.

In a series of late-night tweets, Mboweni asked his near 1 million followers whether the country requires state-owned South African Airways or whether a private company should be given the chance to come in and fill the gap left by its demise.

“Where there is a market gap, a vacuum in a market, an airline will emerge to fill the gap! Will it!?” the minister said.

Ok. Do we need a National Airline? Maybe that’s the question? Is it?

Mboweni’s opening gambit, “OK. What should we do on SAA?” came as a surprise as his own mid-term budget statement in October appeared to have answered that question following months of uncertainty. The R10.5bn– to be drawn from other budgets including the police and education – would be used to finalize a business-rescue plan that called for cash for severance packages, ticket refunds, creditors and other needs.The National Treasury didn’t immediately respond to a request for comment on whether this is now in jeopardy. Responding to public criticism of his musings, Mboweni tweeted that people should “grow up” and that he was merely stating his “democratic view.”The airline’s administrators said they couldn’t immediately comment.

Mboweni has long been an opponent of using state funds to bail out SAA, which has been in bankruptcy protection for almost a year and hasn’t flown a commercial flight since the start of South Africa’s coronavirus lockdown in March. He has clashed with Pravin Gordhan, the public enterprises minister, who has insisted SAA can be restructured, revived and partly sold to a private bidder.

Mboweni is a prolific user of Twitter, which he has used both for provocative political statements and pictures of his dinner.

Oh! Table setting and how it ended. Done and cleaned out! Simple meal. pic.twitter.com/M4fHGZZGnH