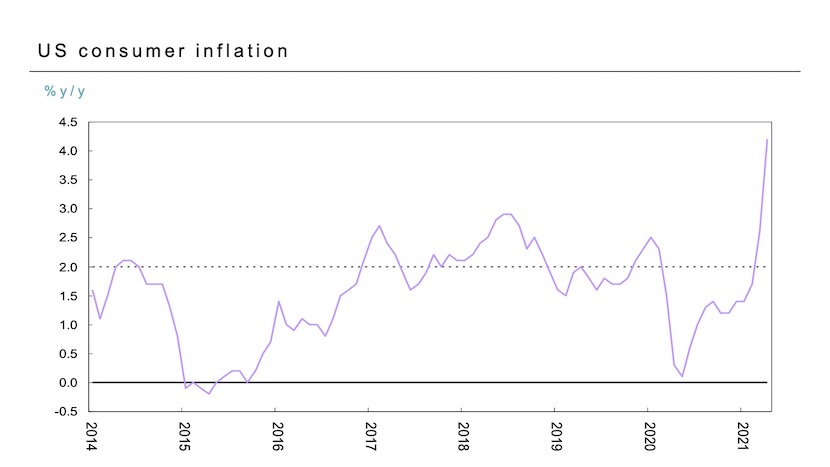 A breakdown of the inflation data reveals that two important factors were largely responsible for the exceptional increase; one anticipated and other not anticipated. The anticipated component of the rise in CPI was the base effect in energy prices. More specifically, energy inflation rose to 25.1%y/y in April 2021, despite gasoline and other energy prices falling during the month. (Motor fuel inflation, which comprises mostly gasoline, was recorded at 48.9%y/y in April 2021). Energy has a weight of 6.9% in the US CPI, which means it contributed 1.73 percentage points to the annual rate of consumer inflation in April 2021, which is very significant.

The second factor pushing US inflation sharply higher in April 2021 was a much higher than expected increase in “Opening up the economy” prices. In other words large prices increase were recorded in activities that have started to re-open following the Covid-19 lockdowns. For example during April 2021:

While all of these components have a fairly low weight in the CPI basket, collectively they clearly make a difference to the overall result.

It is also worthwhile highlighting that used car and truck prices rose by a substantial 10.0%m/m in April 2021 (21%y/y), which partly reflects the impact of the recent fiscal stimulus package but also the current shortage of micro-chips, which is restricting the supply of new vehicles.

Critically, the oil price base effect has now peaked and should start to subside over the next few months. Equally, it seems fair to assume that many of the “Opening up the economy” prices increase should also moderate substantially in the months ahead, (eg, the price of admission to sporting events will not rise by 10% each month). Nevertheless, the current vibrancy in the US economy, coupled with a large inventory shortfall, higher commodity prices and a somewhat weaker dollar could easily result in US inflation remaining uncomfortably high for an extended period. This would lead to increasing uncertainty about the outlook for monetary policy, unsettling financial markets. It is worth highlighting that US inflation expectations, measured at a household level, are at their highest point in a many years – this was surveyed prior to the release of the latest inflation data. In a nutshell, the risk of sustained higher inflation in the US has seldom been more extreme than is currently evident from the analysis.

Recently the US Federal Reserve revised their inflation target from a point target of 2.0% to an average of 2% over time, suggesting that they are willing to run the economy “hot”. This policy approach provides them with some leeway to tolerate inflation well above 2% as long as they are comfortable that the higher rate of inflation will prove to be transitory. While we would expect the Federal Reserve to stick to this narrative over the coming months, financial market participants are likely to increasingly second-guess the Fed’s resolve to adhere to their “outcomes” based monetary policy.