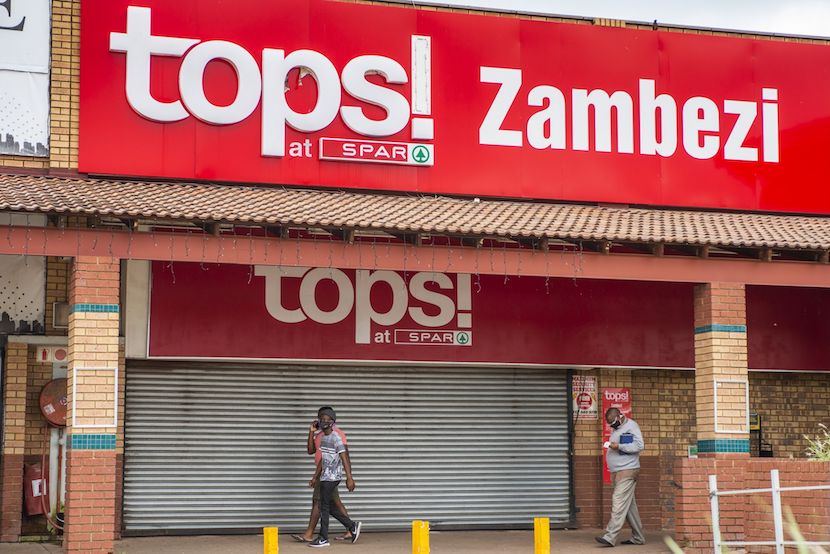 This update provides insight into the Group’s trading performance during the 48-week period from 1 October 2020 to 27 August 2021 (the “period”) including the continued impact of the Covid-19 pandemic (the “pandemic”), the lockdown measures across all regions within which the Group conducts its business, and the recent unrest in the Kwa-Zulu Natal and Gauteng provinces of South Africa.

o Liquor sales increased by 12.0%, despite being impacted by restricted trading. A complete ban on the sale of alcohol for extended periods and the subsequent effect of a low base in the prior financial year contributed to the sales performance

o Build it sales growth increased by 27.6%, also positively impacted by the closure of building material retail during the initial lockdown in 2020. Despite strong initial demand for building materials, sales have slowed in recent months

• BWG Foods (Ireland and South West England) increased turnover by 3.3% (EUR denominated), against the ongoing impact of the pandemic. This performance was again supported by strong contributions from all retail brands and the corporate retail stores

• SPAR Switzerland continued to report strong turnover growth with an increase of 7.3% (CHF-denominated) as both the neighbourhood stores and the cash and carry business reported positive growth

• SPAR Poland increased turnover by 17.5% (PLN-denominated). Pandemic-related challenges have continued to hamper the progress of this business

The Group increased sales by 3.9% to R116.1bn for the period (R111.7bn for the corresponding period in 2020, which has been adjusted to be comparable with the number of trading days in the period).

Sales in Southern Africa increased by 4.5%, which reflected the impact of the pandemic on the business. Turnover for the six months ended 31 March 2021 reported an increase of 3.1% compared to the prior comparative period, whilst the subsequent five months, which almost exactly mirrored the initial lockdown in the prior comparative period, saw sales increase by 5.8%. The core SPAR wholesale grocery business reported sales growth of 0.5%, with like-for-like sales increasing by 0.2%. Having reported internally measured price inflation of 5.2% for the first six months ended 31 March 2021, the decrease to 4.7% for the period reflects the marginal downward movement of prices in a range of grocery and perishable items.

Combined grocery and liquor wholesale turnover, which allows for a better industry comparison, increased by 1.5%. As previously reported, the business has seen changing consumer behaviour over the past twelve to eighteen months due to the pandemic and the impact of the extended lockdowns. SPAR Southern Africa benefitted from increased home consumption with consumers choosing local, convenient and community-based SPAR stores during the initial hard lockdown in 2020. Consequentially, the core business has been impacted by the effect of the high base in the second half of the prior comparative period. Furthermore, the impact of the civil unrest and subsequent closure of many stores impacted the business in the months of July and August 2021.

The liquor business continued to be negatively impacted by restricted trading regulations, having lost 124 trading days during the period. Despite the loss of trading days, liquor turnover increased by 12.0% for the period. Liquor sales increased by 61.0% for the five months to August 2021, demonstrating the effect of the low base in the prior comparative period.

Build it has reported a slow-down in the latter part of the period but remains strong, delivering turnover growth of 27.6%. The sales growth of 26.2% reported for the first six months ended 31 March 2021 was driven largely by home improvement spend. This has declined in the second half of the current financial year, however due to the five weeks of trade lost by the building sector in the initial lockdown in 2020, turnover of building materials increased by 28.5% for the five months ended 27 August 2021.

As reported in our announcement on 23 July 2021, our operations in Gauteng and predominantly Kwa-Zulu Natal were significantly impacted by civil unrest. Of the 184 stores that were initially affected, we have since reopened 115 stores. A further 32 stores will be reopened before the end of the 2021 calendar year. The reopening of the remaining 37 stores will be delayed due to the extent of the damage caused.

At the wholesale level, the Group was fortunate to avoid any material loss of assets or damage to distribution facilities and is adequately covered for all asset damage, stock and business interruption.

It is not yet possible to quantify the full impact of business interruption on the Group’s revenue and profitability, as the timing of the reopening of some stores is unknown and dependent on SPAR retailers and shopping centre owners.

BWG Foods delivered solid turnover growth of 3.3% in EUR-denominated currency. Within the retail environment, neighbourhood stores across all retail brands experienced positive sales growth, as consumers continued to shop locally. Conversely, city centre stores continued to experience a significant decline in footfall and sales. Throughout the period, any easing of restrictions to reopen the hospitality sector has been relatively short lived due to the pandemic, which has continued to impact the cash and carry and BWG Foodservice businesses. The hospitality business has shown resilience throughout the pandemic and following the reopening of certain public venues has recovered to more than 90% of 2019 levels. Despite the ongoing disruptions to this business, the growth in turnover over the last five months remained a solid 3.3% in local currency. When combined with the strengthened Rand, this business reported sales growth of 1.4% for the period.

The Swiss business experienced an extraordinary performance, largely due to a continued lockdown in that region. Consumers have continued to support local retailers extensively during the period and both wholesale and retail sales have increased significantly. SPAR Switzerland has also benefitted from the increased cash and carry trade as the hospitality sector reported improvements. The business reported turnover growth of 7.3% in CHF-denominated currency terms. With the easing of pandemic-related restrictions, this business did give up a portion of sales gained during the initial lockdown, as the local market and borders reopened and trading patterns started normalising. Turnover for the last five months of the period slowed to a growth of 3.4%. This was not only attributed to the change in consumer shopping in the period, but also the extremely strong performance in the prior comparative period. During the second half of the period, the business has also focused on the integration of the SSAG (60 AVIA petro-convenience stores), acquired in March 2021. In reporting currency, this business increased turnover by 4.2% for the period, reflecting the impact of the strengthening of the Rand.

SPAR Poland made a positive contribution to turnover, which increased by 17.5% (PLN denominated) and 12.1% in reporting currency. During the period, the business has been focused on driving SPAR retailer loyalty, which represents the percentage of goods purchased by retailers through the SPAR wholesale system. Retailer loyalty for the month of August reached 29% and continues to climb, albeit at a slower pace than initially anticipated. Consumer trends remain broadly similar with fewer visits to the stores and a bigger basket value. The overall retail environment has recovered slightly since the reopening of shopping malls in May 2021, helping to negate the impact that the closure had on a small number of corporate stores.