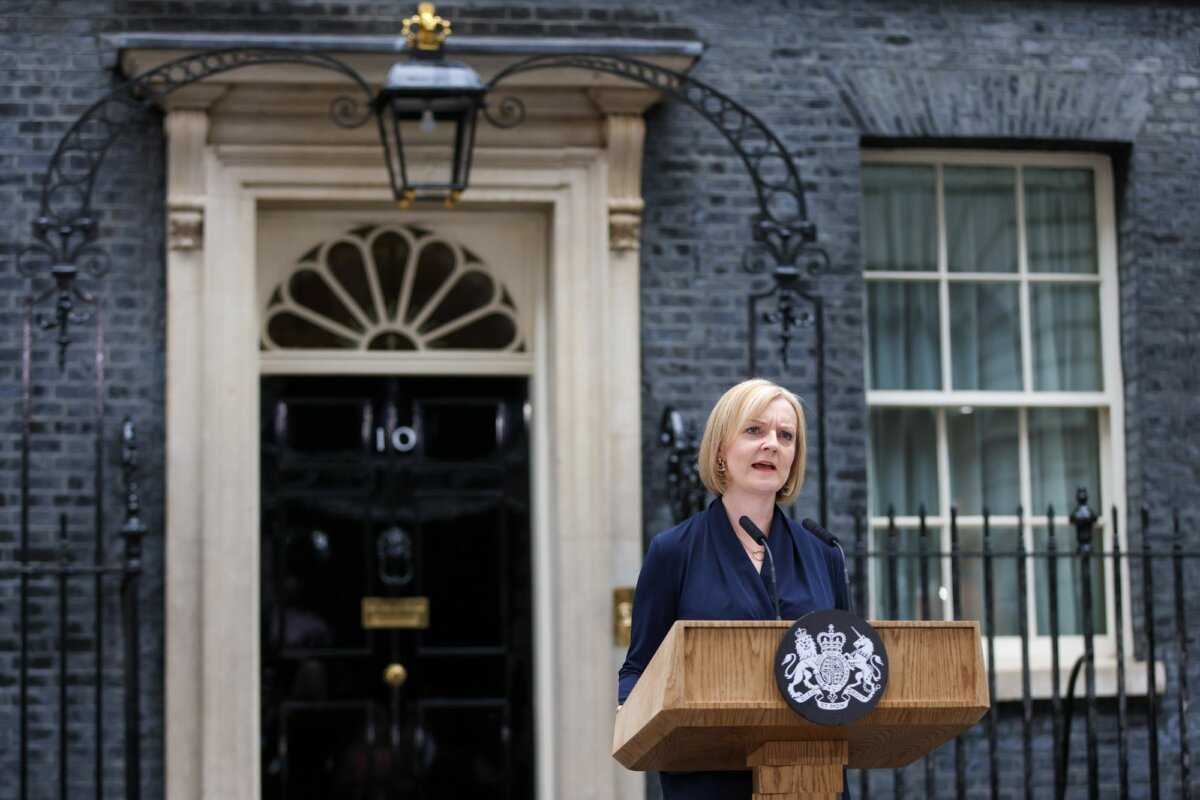 (Bloomberg) – Liz Truss quit as UK prime minister after a brief and chaotic tenure that saw her announce a massive package of tax cuts before unwinding most of it in the face of a market rout.

Truss, 47, said she was resigning after just 44 days in office, and is set to become the shortest-ruling prime minister in British history. The ruling Conservative Party aims to choose her successor by Oct. 28, and she will stay on as premier until then.

Candidates to replace her are likely to include former Chancellor of the Exchequer Rishi Sunak — runner-up to Truss in this summer’s leadership contest. Other contenders then are also likely to be in the fray, including Penny Mordaunt, Grant Shapps and Kemi Badenoch. Former Home Secretary Suella Braverman, who was fired on Wednesday, may also be in the running. Defence Secretary Ben Wallace is often touted, though he has downplayed his interest.

But new Chancellor Jeremy Hunt, promoted from the back benches after Truss sacked Kwasi Kwarteng in a bid to restore calm in the markets, ruled himself out, according to his spokeswoman.

Speaking to broadcasters, Conservative MP Graham Brady — who sets rules on leadership contests — said despite the short time frame, the party aims to put two candidates forward for selection by grassroots Tory members. More details will be set out later Thursday, he said.

Brady also said the government will be able to give a fiscal statement on Oct. 31 as planned.

Truss came to power in early September promising an all-out push for growth, but her program proved unpalatable to financial markets as both the pound and gilts tanked amid concerns about how she’d pay for her economic plans.

Her departure leaves the ruling Conservative Party badly damaged, languishing more than 30 points behind Labour in the polls after 12 1/2 years in power. Her successor will become the party’s fifth premier in less than seven years since the 2016 Brexit referendum ushered in a period of unprecedented chaos in British politics.

Whoever it is will face a formidable task in repairing the Tory party’s reputation and the economy in time for a general election which must take place in January 2025. Truss’s tenure has all but guaranteed post-Brexit Britain’s immediate future is one of higher borrowing costs, weak growth, tax hikes and spending cuts.

“It’s a shambles and a disgrace,” veteran Tory MP Charles Walker told the BBC on Oct. 19. “The damage they have done to our party is extraordinary.”

Truss’s undoing was ultimately a lack of political instinct and awareness of economic reality.

After narrowly winning the leadership without the backing of most MPs, she set out to govern as if she had secured an overwhelming mandate with a barrage of radical measures. Inheriting a divided party, she appointed loyalists to key jobs rather than reaching out to her opponents. And when, at the last, she tried to stamp her authority on the party, she only provoked its anger.

The central mistake of Truss’s term was a massive £45 billion ($50 billion) package of tax cuts, amid the strongest inflation in four decades, that she drew up with Kwarteng and unveiled without any independent analysis of how it would be funded.

The biggest tax giveaway in half a century went further and faster than Truss had signaled during the leadership contest, and the markets reacted violently amid fears it would hamper the battle against inflation and destabilize the public finances. The pound’s tumble to an all-time low against the dollar and the imminent threat of a rout in gilts forced the Bank of England to intervene to prevent a key part of the pensions industry from collapsing.

Truss and Kwarteng tried to repair the damage by first reversing an unpopular move to abolish the 45% rate of income tax on the UK’s highest earners. Then on Oct. 14 Truss sacked Kwarteng and scrapped their plan to freeze corporation tax next year. Hunt unpicked most of what remained of the economic strategy three days later, leaving the premier’s credibility shot.

The final humiliation came on Wednesday evening as the desperate prime minister tried to corral her angry MPs into the voting lobbies in the House of Commons for a make-or-break ballot that she had no reason to take on. Braverman’s dismissal earlier in the evening for a security breach that in normal times might have earned her a mere reprimand had already alienated a swathe of the right of the party.

Truss won the vote, but in the bitter aftermath she lost her struggle to stay in power.