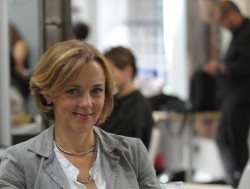 As we saw when she gave McKinsey a roasting last week, Lucy Kellaway prefers telling it like it is. This week the Financial Times of London’s best columnist takes a look at the cerebral side of corporate life. The best brains, apparently, reside in its young graduates. And, she says,  the brightest of them soon tire of a large company’s tendency to reward mediocrity. Another Kellaway classic. – AH

Last week I talked to a graduate who had just started working for one of the most prestigious employers in the world. How’s it going, I asked him.

He said it was fine, though all he had done in the past three weeks was sit in various rooms and be talked at by assorted people from the company. The main thing that had struck him so far was that people seemed to get dimmer the higher they went in the organisation. His fellow trainees were almost all brilliant, he said, and people at the next level up were also pretty smart. But those 10 years older were pedestrian by comparison, while some of the partners seemed borderline moronic.

I asked if he had any explanation for this. He looked at me as if I were a moron too and said the reason was self-selection. Really smart people don’t stay at the institutions they have fought so hard to get into. The best leave within two or three years; the slightly less good stay a bit longer, and only the also-rans and the terminally unimaginative are in for the long haul.

Given that for nearly 30 years I have failed to peel off from a company that also hires some of the brightest graduates, this wasn’t what I wanted to hear. Not true at the FT, I protested. Look at Martin Wolf! Our most popular, heavyweight columnist has been with us forever.

He gave a shrug and said possibly journalism was different; I reflected sourly on the arrogance of youth. When I started out, I may not have thought those above me were gods, but I was at least inclined to give them the benefit of the doubt.

I’ve been thinking about our conversation since, and have decided he may be on to something after all. It is certainly true that the very cleverest now use top employers as a training ground and springboard. (Which means employers should either stop busting a gut to hire the very best as they will lose them almost at once, or make better use of their talents for the brief moment they are on the payroll.)

It is a big change from when I was grad trainee. In my intake at JPMorgan in the 1980s there was no race to the door by the smartest. Out of a group of 10 the two who quit after the first two years weren’t so much the brightest as the misfits – we were the ones who shouldn’t have been hired in the first place.

Yet there are three other explanations for dwindling brilliance in big organisations which may be more important.

For a start, today’s intake is simply better than it used to be. There are more graduates competing for top jobs, which means they go to people who are academically accomplished, have notched up multiple internships, speak 16 languages, are dab hands at coding and have sailed the world single-handed. The brightish amateur with a smooth line in waffle, who was a shoo-in 20 years ago, doesn’t have a chance.

The second explanation is not that the mediocre stay, but that staying makes them mediocre. Years of drudgery and late nights in the office have a way of taking the shine off any brilliance, and in any case there is no incentive to hang on to it as the corporate world doesn’t rate it. Rather than reward brilliance it prefers skills that graduates can’t see: good judgment, a nice way with clients, and an instinct for when to bite your lip. Even if today’s partners weren’t boring to start off with, they quickly learn to seem that way.

The last reason is the one that troubles me most. It may not be true that the partners are miles dimmer than the graduates. It is just that the two can’t talk to each other, and so are blind to each other’s strengths. It was always the case that the old and the young sometimes struggled to understand each other at work, but now it is more true than ever.

The graduate trainees joining this year will be among the first to have grown up on the internet, which means they communicate differently, think differently, acquire knowledge differently and do different things with it. They look at the partners and see slowness; the partners look at them and feel sad about their limited vocabulary, and wonder if they have ever read a book.

I met our own brilliant trainees a few days ago and for the first time I found myself slightly at sea. In a way it was exhilarating to know that they will approach journalism quite differently from how I approach it, but it was troubling, too. As I banged on about the things that I think are interesting, I sensed they were looking at me oddly; they may have been thinking: this woman is a moron – or a genius – or were merely regretting that it was a long time til lunch. The trouble was this: I couldn’t read them well enough to know one way or another.