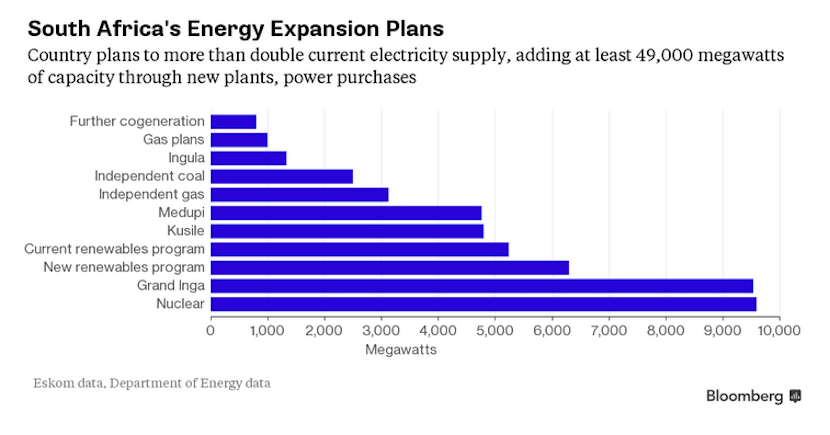 Only once the whole plan is exposed can meaningful debate begin. Which is what we now have, courtesy of Bloomberg, which unpacked plans being hatched inside the SA Government’s  “War Room” established to tackle the country’s electricity crisis. Even at a glance the serious flaw in this high risk approach is obvious. The country’s politicians are betting the farm on a combination of expensive nuclear and the much-delayed, much-hyped proposed Inga Falls hydroelectricity project in the DRC. Former President Thabo Mbeki and his team believed so much in Inga Falls they stopped Eskom building its much needed construction of new plants – a decision that even the ANC admits is the direct cause of electricity scarcity that’s now costing the country so dearly. Despite that bet going missing, the politicians are doubling up on the view that this time will be different, that Inga will indeed be built, even though there is little concrete to back that. Inga is one of two cornerstones in the Master Plan, a $100bn Russian-built nuclear fleet being the other. If ever there was an opportune time for creative inputs from outside the ANC’s blinkered inner circle, it’s now. – Alec Hogg

(Bloomberg) – South Africa’s government has established a “war room” to tackle energy shortages that have led to managed blackouts and contributed to the economy’s contraction in the second quarter.

About 95 percent of the nation’s electricity is supplied by state-owned Eskom Holdings SOC Ltd., which had installed generating capacity of 44,262 megawatts at Sept. 2. More than 85 percent of the utility’s output comes from coal-fired plants.

Here’s what’s being done to bolster power supply and diversify the energy mix:

* Eskom is building two new coal-fired plants – Medupi and Kusile – that will jointly add 9,564 megawatts of power to the national grid. Medupi’s first 794-megawatt unit came online on Aug. 23. The initial output from Kusile’s first 800-megawatt unit is expected in August 2017 and from Medupi’s second facility a month later. The plants, which will cost a projected 223.5 billion rand ($16.1 billion), are running about four years behind schedule.

* The feasibility of building a third new coal-fired plant, with an initial budgeted cost of 111.1 billion rand, is being investigated.

* Private companies have been invited to bid for contracts to supply 2,500 megawatts of coal-fired power. The deadline to submit proposals closed Aug. 31.

* The government plans by the end of March to award bids to build power plants that will supply 9,600 megawatts of atomic energy to the grid. While it wants the first facility to be operational in 2023, it remains unclear how it will foot a bill for as many as eight reactors that could run as high as $100 billion.

* Work on the 25.9 billion-rand, 1,332-megawatt Ingula pumped storage facility is nearing completion, with its four units scheduled to be connected to the grid between May and August next year.

* South Africa has signed a treaty with the Democratic Republic of Congo to buy electricity from the planned Grand Inga hydropower plant. Under the accord, South Africa is guaranteed a minimum of 9,540 megawatts and a maximum of 13,060 megawatts, with further supplies subject to negotiation. Construction work has yet to begin on Inga, which is expected to eventually cost about $100 billion and generate 40,000 megawatts of electricity.

* The government is seeking bids from private companies to supply 3,126 megawatts of power generated from gas.

* Eskom is revamping two existing open-cycle turbines to enable them to use gas as well as diesel. The project will probably be completed in 18 months and cost about 1.8 billion rand.

* A 300-megawatt diesel plant in the Eastern Cape province is due come online in October, while a 700-megawatt facility in the KwaZulu-Natal province is scheduled for completion in May 2016. The plants will be used during peak demand periods.

* Independent producers have been awarded contracts to supply more than 6,000 megawatts of solar- and wind-generated power to the grid. The government intends procuring a further 6,300 megawatts of green electricity.

* Eskom is buying 827 megawatts of power generated during industrial processes by private companies.

* The government has called for bids from companies to supply it with a further 800 megawatts of co-generated power.