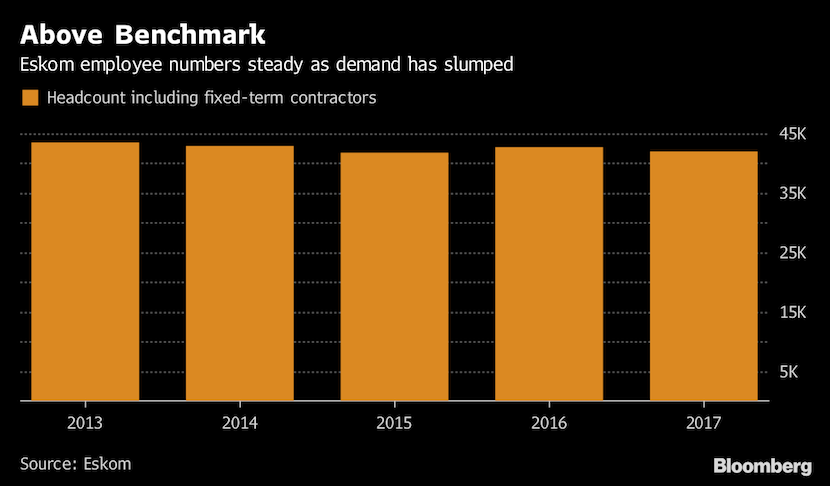 JOHANNESBURG — South Africa’s state-owned enterprises really do have mountains to climb. Years of mismanagement has taken its toll, and the new brass has to clean up. The first SOE priority on President Cyril Ramaphosa’s plate has been Eskom. One of his first orders of call was to replace the energy utility’s board, with Jabu Mabuza put into the hot seat. Mabuza came with a strong corporate sector pedigree having served on a number of boards and as chair on many including Telkom South Africa and Anheuser-Busch InBev. But change is a gradual process until the suddenly hits, and it looks like Eskom is in the suddenly phase. In the Bloomberg piece below, Mabuza outlines what isn’t working at the company, and what may be needed to fix it. It’s a case of too many hands and too little work at present. And a restructure of people and assets looks like the next step. A case of load-shedding that won’t hurt consumers. – Stuart Lowman

By Amogelang Mbatha and Paul Burkhardt

(Bloomberg) – Africa’s biggest power utility is reviewing its business, including staff numbers and possible asset sales, to find a way out of massive debt and develop a more sustainable model, according to its chairman.

South Africa’s state-owned Eskom Holdings SOC Ltd. will hold a strategic session next week as part of an effort to address flaws that forced it to take a R5 billion ($422 million) loan for the month of February to maintain essential liquidity levels.

“Our cost structure is definitely not right,” Jabu Mabuza, Eskom’s chairman, said in Cape Town, where he attended a Bloomberg conference. “We have to have to help the organization to be structured with people, assets, funding in a manner that is appropriate.”

Eskom’s financial crisis stems from factors including weak demand, delinquent municipalities that don’t pay their bills and allegations of graft. The utility bought itself some breathing room this month by signing a R20 billion short-term credit facility with a group of banks, but the issues remain. Mabuza was appointed chairman in January as part of an overhaul of the board as President Cyril Ramaphosa rose to power, promising better management of state-owned companies and a crackdown on corruption.

The business needs to address “unacceptable” debt-to-equity ratios, which are above 70 percent compared to the benchmark of around 50 percent, Mabuza said. It needs to look at disposing non-core assets, including a housing company it owns.

“When you don’t have money you need to look at anything that is of value that you can sell,” he said.

The utility must to agree on a price path for renewable power from independent producers, he said. A government program to diversify South Africa’s energy mix has been held up for more than two years since Eskom refused to sign agreements allowing the projects to progress.

“Whether it is human or office, everything needs to be looked at” in terms of cost, Mabuza said. He declined to give a target for how much the utility should reduce its current number of almost 42,000 employees, but said it will also be reviewed. “Benchmarked against our peers globally, Eskom is definitely employing too many people,” he said.